For decades, experts have called for the diversification of the New York City economy. In the wake of postwar deindustrialization, our reliance on Wall Street and the financial industry in general had by the 1990s left our city disproportionately vulnerable to swings in the financial markets. We have experienced significant downturns that today feel like distant memories but could certainly return. I know this from my own experience as director of planning for Manhattan after Sept. 11.

In those heady dark days, few spoke about gentrification or the supposedly ominous specter of new companies entering New York City. To the contrary, many worried that no one would build so much as a Quonset hut in this city again. Darker still were the memories of my older colleagues in city government, who helped rescue us from the nose-dive of the late 1970s, when New York City lost hundreds of thousands of jobs and crime ravaged our most vulnerable neighborhoods.

It is with dismay that I hear the fiercely negative reaction to the announcement that New York City won the Amazon competition to land at least 25,000 jobs and decades of direct and indirect economic growth in Long Island City. The fact that the debate has yielded so much heat and so little light is a sign of how complacent we have become. It is easy to forget that employment generates our city tax base, which strains to help fund the public goods we so desperately need, from schools to transit to affordable housing to parks to basic services like snow and trash removal. The city’s tax revenues have more than doubled since Sept. 11, to $83 billion from $40 billion. The Bloomberg administration put us in this enviable economic position; Mayor Bill de Blasio and Gov. Andrew Cuomo should be lauded for doubling down on those efforts.

Yet there are stiff headwinds. Municipal spending is outpacing growth. Federal urban investments continue to retract. And we already have some of the highest income taxes in the country. Julissa Ferreras-Copeland, who served on the City Council until 2017 and was chairman of the council’s finance committee, said of the budget: “We know there’s a storm coming. We don’t know how big it’s going to be.”

It is for these reasons that we should welcome Amazon, but with a few caveats: To become true New Yorkers, the people at Amazon must abide by our implicit social compact, which is that New York City strives to be a place of opportunity for all. Amazon, the city and the state must build an “infrastructure of opportunity” that creates both physical and social mobility for all New Yorkers, and they must do so with fiscal responsibility. 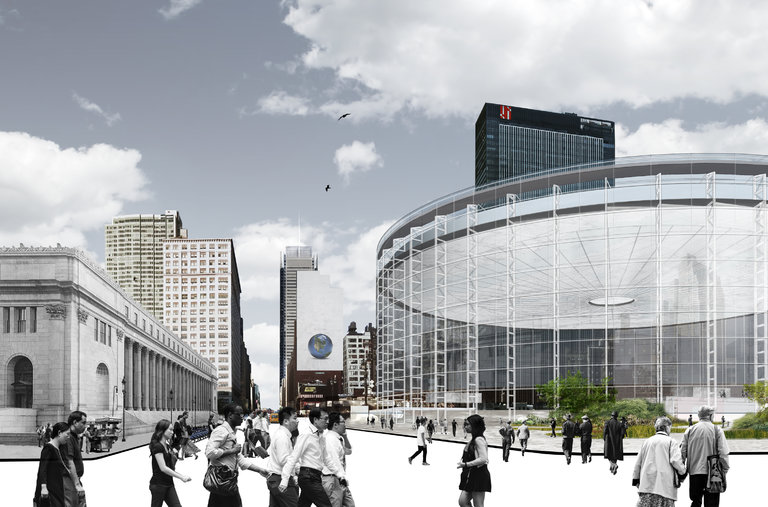 While opinions differ regarding the incentive package offered Amazon, a few things are clear: Amazon obtained incentives available to any forward-looking large company seeking to relocate here. Second, government officials involved are confident that the deal will yield between $12 billion and $27 billion of direct economic benefit, which is many multiples of the incentives offered; and third, the incentives are part of the city and state’s established budget to lure companies here — not money that would otherwise go to subways and schools.

Beyond these incentives, government investments should be focused on significant improvements to the physical mobility of western Queens, including a reimagined subway, streetcar, bus, bike, scooter and ferry network. The agreement does establish an Infrastructure Fund using targeted tax revenue, but the details, time frame and scope for the improvements are murky and should be clarified. Amazon must participate as well — let’s press those logistics experts less about a helipad and more about how they hope to transport thousands of workers to one of the most congested parts of our city. First steps have been made, along with commitments to make Amazon’s new waterfront home accessible to the public in accordance with the Long Island City waterfront design guidelines.

More significant is the potential to create a new paradigm for social mobility. We lost this along with our manufacturing base and never regained it by relying on Wall Street. Unsung treasures like LaGuardia Community College, Queensbridge Houses and the public schools and cultural institutions of Queens shouldn’t be thrown the crumbs of this project. Amazon is proposing to locate in the most ethnically diverse county in the United States and near the nation’s largest public housing project — the company’s work force and campus must reflect the diversity around them.

The current agreement with Amazon, which calls for $15 million to fund work force development and three years of direct engagement with Queensbridge Houses, is a good first step. More should be done, including a longer-term goal of 50 percent of all employees drawn from the borough. This is an enormous opportunity for Amazon to differentiate itself from its competitors by proving that it can help bridge what has become a gaping American class divide.

Amazon will continue to be criticized about the way it held this competition, even though New Yorkers have long advocated more business growth outside of Manhattan. (Queens has a population similar to Chicago’s but nowhere near the economic output.) Amazon will be criticized for its impacts on small retailers, although it arguably hurts big-box stores far more than mom-and-pops, which sell through Amazon. It will be criticized for being one of the world’s richest companies, by both the left and the right.

But in the end, the benefits to everyday New Yorkers should be substantial enough to put all of these criticisms to rest. At best, it will spur a return on investment that in 20 years doubles the city’s tax revenues, as happened in the past two decades. Such an outcome would fund the physical and social infrastructure needs for a city that by then could be 10 million strong.

This isn’t about one company. It is about fulfilling our collective dream of New York as a city of opportunity for millions of strivers of all colors, genders and creeds. Our new socioeconomic ladder appears to be digital, and we should embrace it, if — and only if — its creators have the tenacity and temerity to embrace us.

Vishaan Chakrabarti is an architect, author and professor at Columbia University.