This is an article from World Review: The State of Democracy, a special section that examines global policy and affairs through the perspectives of thought leaders and commentators, and is published in conjunction with the annual Athens Democracy Forum.

For a movement without publicly identifiable leaders or clearly articulated goals, France’s “Yellow Vests” have proved remarkably durable. Since late 2018, their protests have surged periodically through the streets of Paris and other French cities, representing a grab bag of character types and social categories, a shifting list of demands and tactics that have ranged from peaceable marches to arson and vandalism.

The Yellow Vests were back on Sept. 12, with a modest demonstration that gathered 8,500 protesters across the nation, including 2,500 in Paris, according to official figures. There were the usual mixed messages, mostly reflecting fear of economic insecurity, and mix of participants, including about 50 discothèque owners and independent chauffeurs seeking to draw attention to their particular struggles during the coronavirus pandemic.

The amorphous Yellow Vest movement fits a pattern seen around the world in recent years — from the anti-government demonstrations during the Arab Spring of 2011 to those now recurring in the Belarusian capital, Minsk, and the Russian city of Khabarovsk; from the continuing Black Lives Matter movement in the United States to the London-based Extinction Rebellion, with its do-it-yourself campaign against climate change.

There is something very 21st century about “leaderless” movements, all of them propelled and amplified by the formidable power of social media, which can with a click of a button summon protesters to a given place at a given time, armed with a set of slogans. Some messaging apps have added a new, more democratic dimension, with polling features that allow group members to vote on where to go, and what to do.

These campaigns — some, like the #MeToo movement, today exist almost entirely online — still require coordination, decision-making and communication skills in the traditional sense, but nothing like the laborious organizing, sustained personal presence and charismatic individual leadership that galvanized the American civil rights movement in the 1950s and ’60s.

Leaderless protests are not new. What matters is the way they evolve. Few remember who led the Paris mob that stormed the Bastille on July 14, 1789; Robespierre, Danton and others were to appear later in the French Revolution. Almost two centuries later, violent street protests in Paris and across France in May 1968 did not lead to immediate political reforms, but they did usher in enduring social and cultural changes.

Nor are history’s accolades always fair: Mahatma Gandhi and the Rev. Dr. Martin Luther King Jr. get the credit for leading their movements, but there were many others, mostly forgotten, who shared their struggles and triumphs. “I think that, to be very honest, the movement made Martin rather than Martin making the movement,” said Ella Baker, a veteran civil rights activist, in 1968. “That is not a discredit to him.”

Individuals who come to embody their crusades also make easy targets for governments, which can try to undermine or cripple a movement by arresting or discrediting its most prominent public representatives.

The question for today’s leaderless movements is whether they can maintain their focus and effectiveness in the absence of a public face. Without a Ghandi or a King, without action plans, without internal discipline, can popular outrage — typically the source of these disparate crusades — be translated into an agenda for change?

Much depends on why these movements erupt in the first place. The demonstrators who poured into Tahrir Square in Cairo in 2011, or the streets of Algeria in 2019, went there to oppose existing governments. And in many cases, such mass mobilizations work, at least in the short run: Both President Hosni Mubarak of Egypt and President Abdelaziz Bouteflika of Algeria were forced out of office.

“If you want to express the fears and hopes of a community — like in Tahrir — you don’t need a boss, you don’t need a face,” said Vincent Martigny, a professor of political science at the University of Nice and the École Polytechnique.

“When the goals are negative, protest movements can be effective,” said Yascha Mounk, a political scientist and an associate professor at Johns Hopkins University in Baltimore. “All you want is to get the leader out.”

It is still too early to talk about the success of these continuing “horizontal” movements, where the choice to remain leaderless is a deliberate challenge to “vertical” — that is, traditional and hierarchical — power structures.

“These new movements do not need an intellectual vanguard to provide them with an ideology because they already have one: the rejection of intellectual vanguards and embrace of multiplicity and horizontal democracy itself,” wrote David Graeber, a leading figure in the Occupy Wall Street movement and a professor at the London School of Economics, in a December 2018 article. (Mr. Graeber died in September.) 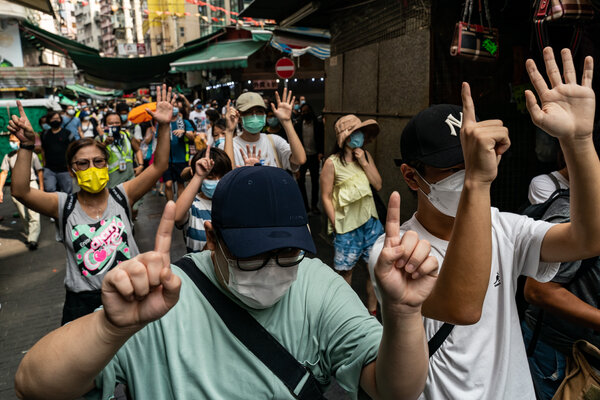 For a year, the Hong Kong protesters deliberately avoided structured leadership, borrowing their rallying cry from a famous Bruce Lee quote: “Be formless, shapeless, like water.” This approach allowed them to be mobile, adaptable and to some extent anonymous, dodging arrests with rapid messages transmitted over countless encrypted Telegram channels.

But even this strategy was not enough to protect them from the Chinese government’s draconian crackdown over the summer, which resulted in a wave of arrests. Some activists were even caught at sea trying to flee to Taiwan.

Other protest movements have local and national organizers, but they remain mostly on the sidelines, in the shadows or even out of the country, as in the case of Stepan Svetlov, a 22-year-old Belarusian blogger now living in Poland who has helped mobilize the Minsk demonstrations.

“It’s the people who are initiating this whole process against Lukashenko and the regime,” Mr. Svetlov told The New York Times, referring to the Belarusian president, Aleksandr G. Lukashenko. “We are just helping them to achieve this.” The recent arrests and forced exile of locally based opposition figures have so far not stopped the weekly protests.

Lyubov Sobol, a top ally of the recently poisoned and hospitalized Russian opposition leader Aleksei Navalny, also discounted the role of public leaders in the frequent protests in the city of Khabarovsk in Russia’s Far East. “The people are coming out for themselves, not because a leader told them to,” she told The Moscow Times.

Activists in the Black Lives Matter movement cite the example of the Student Nonviolent Coordinating Committee from the civil rights era, which was led by community-based organizers. “Strong people don’t need strong leaders,” was the famous saying of Ms. Baker, who was one of the committee’s founders.

This fluid democratic approach is also characteristic of the Yellow Vests, who take their name from the high-visibility vests French drivers are required to keep on hand for emergencies. The Yellow Vests came into the streets in late 2018 to protest an increase in a gasoline tax. But their protests quickly widened, and they came to represent popular resentment against an elite perceived as distant and arrogant, as well as anxiety about an economy that has left many behind and struggling.

The gasoline tax was suspended, but the main achievement of the Yellow Vests was making their voices heard.

“They are a democratic warning, a wake-up call, which is a positive thing,” Mr. Martigny said. “They reminded the government that the search for equality is essential for French society.”

There are definite drawbacks to these horizontal movements. A lack of control — not only over a movement’s followers but also its message — can lead to the kind of lawlessness and violence that have erupted at the edges of demonstrations led by Black Lives Matter, the Hong Kong protests and the Yellow Vest protests.

“A lack of organization means that they can’t say ‘This is not us,’” Mr. Mounk said. “The same is true of issues.”

To contain this lawlessness, movements require traditional leaders. The problem, Mr. Martigny said, is that choosing them necessarily requires compromise, something that today’s protest movements tend to resist.

“If you want to propose something new, the world is made in such a way that you need faces,” Mr. Martigny said. “If you have no one to propose, that makes it difficult.”

Celestine Bohlen is a former foreign correspondent for The New York Times, serving in Budapest, Rome and twice in Moscow.