Vladimir Putin’s Russia has openly embarked on an aggressive rearmament. The Intermediate-Range Nuclear Forces Treaty is dead (broken by Russia, then canceled by President Trump), the Strategic Arms Reduction Treaty is near death, and scarcely a month goes by without the Russian Ministry of Defense or President Putin himself boasting of a new game-changing miracle weapon — what Germans once called a wunderwaffe.

Well, do we have a new Cold War? Is there any similarity between Mr. Putin and the leaders of the Soviet Union?

In fact, there’s no similarity. The Soviet Union rarely bragged about its weapons, although it often paraded rockets past the Kremlin. It claimed to be a peaceful state, surrounded by capitalist warmongers, and when it came to new weaponry, it was extremely secretive. Back then, everything Mr. Putin is bragging about today would have been top-secret, burn-before-reading stuff.

So let’s have a closer look.

Start with the S-400 Triumf antiaircraft system, which Turkey recently acquired with great hype. Russia deployed it back in 2007 and said it was the best air-defense system ever made, with a 250-mile range 40N6E missile capable of engaging targets at altitudes ranging from 15 feet to 20 miles — a capability unparalleled by any other surface-to-air missile system anywhere. 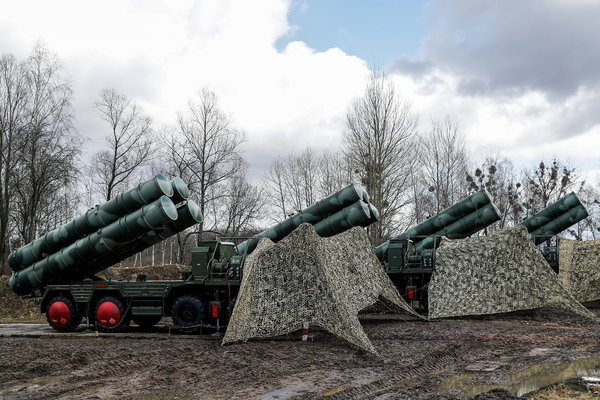 But its capability hasn’t had a chance to prove itself in action. The first successful test of the 40N6E missile took place in 2015, seven years after deployment; the tests were not finished until July 2018, and last February the first shipment of 40H6Es was shipped off to China, which had been awaiting them eagerly for four years.

Guess what? The ship was caught in a storm, and even though those precious missiles were supposedly sealed up tight, Russian officials said they got wet and had to be destroyed. So we can be sure that what made the S-400 missile system unparalleled was that it took 11 years to become officially deployed. And we still can’t be sure that it’s fully functional. Only God knows what Turkey is about to get.

Let’s take a look at another Russian wunderwaffe: the hypersonic cruise missile Avangard. It was one of six new Russian strategic weapons unveiled by President Putin in his state address on March 1, 2018. The Ministry of Defense proudly announced that the missile, once released by a rocket, glides at 27 times the speed of sound and is capable of horizontal and vertical evasive maneuvers. It flies “like a fireball,” said Mr. Putin.

Well, of course Avangard has a really hot re-entry speed. But so does any other ballistic warhead. And yes, Avangard is capable of maneuvering, since it’s fitted with winglets. But that’s actually a very old idea —- to fit a ballistic rocket with wings so it will be capable of atmospheric maneuvering. It was first tried in 1944 by Wernher von Braun with some of his Nazi V-2 rockets. It’s a dead end. At extreme speed, and with a warhead on a ballistic re-entry course, whatever you gain in maneuverability, you lose in precision.

It goes without saying that Avangard is capable of striking United States territory, and that it can’t be successfully intercepted. But so what? That’s true of any Russian I.C.B.M.

Another of Mr. Putin’s wunderwaffes is the Zirkon missile, a hypersonic ship killer with a 250-mile range. It’s hard to say what it’s like: Every time Russian officials boast about it, they post a photo of America’s hypersonic Boeing X52 Waverider.

A hypersonic ship killer hurtling at eight times the speed of sound certainly looks impressive in video games. But the harsh reality of a high-tech war is a tad different.

Traditionally, there have been two different approaches to ship killers. The United States Navy opted for its slow, subsonic, sea-skimming but hard-to-detect Harpoon.

The Soviet Union chose supersonic missiles. It was really good at producing scramjets and ramjets. In fact, that was one of the few fields where the Soviets were at the top of the game.

The first-ever ramjet — a jet engine that doesn’t need a turbine and a compressor, relying on the sheer volume of air pushed through it by the speed it develops — was Nazi Germany’s V-1 “buzz bomb” that was employed to terrify the British in World War II, but only heightened their resolve. It was launched from a rail at a speed of about 370 miles per hour.

After that war the Soviets acquired some of Hitler’s V-1s and V-2s and they were developed further by a bureau headed by Vladimir Chelomey. Mr. Chelomey wasn’t quite successful as a designer until he employed an engineer, Sergei Khrushchev — a capable engineer, but what is more important, the son of the Secretary General of the Communist Party of the Soviet Union, Nikita Khrushchev. This gave Mr. Chelomey unlimited access to resources and resulted in the creation of some genuinely outstanding pieces of military technology.

Soviet supersonic KUB surface-to-air missiles played an enormous part in the initial stages of the 1973 Israeli-Arab war, and the Onyx supersonic antiship missile was a genuine marvel. At the final stage of its flight it skimmed the water at 40 to 50 feet, far higher than its American counterpart but still enough to avoid detection.

Despite all these successes, the Soviet Union never went for a hypersonic ship killer. The reason was simple. Because of the extreme heat generated by hypersonic flight, the missile wouldn’t be able to fly lower than 25 miles up, making it a sitting duck for interceptor missiles.

It’s true that such a missile is fast, but remember that it’s a scramjet, with huge, big, nasty air intakes, on which it depends to keep aloft. Any deviation from its course, especially at low altitudes, can wreak havoc with the airflow. In other words, it’s not maneuverable at any altitude, and is especially in danger of crashing if flying low.

The Soviet Union chose not to manufacture supersonic ship killers not because manufacturing them was impossible, but because they would be useless. They’re great stuff for a computer game. Not so great for real-world engineering.

So this brings us back to our main topic. Almost all military hardware Mr. Putin is boasting about harks back to Soviet times. When the projects proved to be dead ends, the products were rejected even by the Soviet military — not because they were too advanced to create, but because they were not functional.

The Soviet war chest was full of monstrous projects that were always top secret, whether they were feasible or not. That’s what Mr. Putin is capitalizing on — and what his generals are feeding him. Sometimes they just exaggerate, as with the S-400. But as often as not they take top secret Soviet failures and try to rehash them as public relations successes.

Yulia Latynina is a Russian journalist with Echo of Moscow, a commercial radio station, and Novaya Gazeta, an independent Russian newspaper.