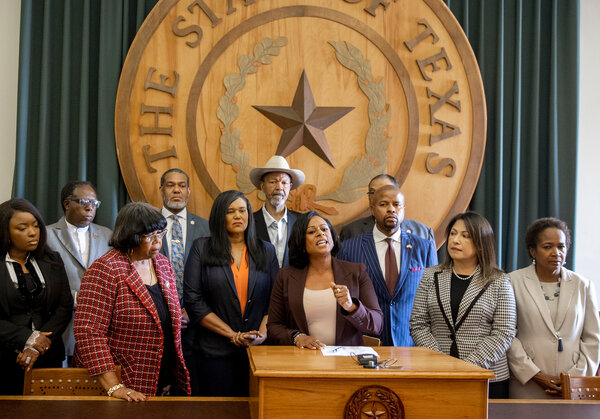 Re “A New Showdown on Voting Limits Emerges in Texas” (front page, June 1):

It’s hard to say whether too many Republicans hate democracy more than they fear it, or fear it more than they hate it. In any case, they want the least of it possible — which includes shrinking suffrage as much as possible. As former President Donald Trump exaggeratedly explained, greater voter participation means that “you’d never have a Republican elected in this country again.”

It’s therefore no surprise that Texas Republicans are doing their best to scuttle universal suffrage by proposing restrictions on absentee voting, enhancing the power of poll watchers (i.e., poll intimidators), and banning drive-through and 24-hour voting.

Republicans have already managed to curtail voting in Georgia and Florida, among other states. Future generations may marvel at how we focused on foreign enemies of democracy rather than on the much more dangerous enemies, Republicans here at home.

Good for Texas Democrats for finding a way to stop their Republican colleagues’ efforts to suppress the vote. If G.O.P. lawmakers had confidence that their policies benefited their constituents, they would be encouraging voting, not finding new and creative ways to prevent people from exercising their most fundamental right, the right to vote.

I am not worried about Republican maneuvers to keep people from voting, as undemocratic as they are. They are nothing more than the dying gasp, a whimper really, of a former national party that is out of touch with reality. Out of touch with the changing demographics of the country, with the increasing numbers of people of color who have little in common with most Republicans, and who believe in truth and science and factual evidence.

There are too many people outside of the current delusional G.O.P. base who cannot be swayed by the right-wing fictional propaganda machine. They cannot keep all of the rest of us from voting. There are too many of us and our numbers are growing, and people like Stacey Abrams will make sure that most of us get to the polls, whatever roadblocks this truth- and democracy-denying G.O.P. tries to put up.

Re “A Tennis Star With Anxiety Quits a Major” (front page, June 1):

In fining the tennis star Naomi Osaka and threatening to expel her, the leaders of the four Grand Slam tournaments stated that their rules “ensure all players are treated exactly the same, no matter their stature, beliefs or achievement.” But not no matter their mental health.

Players suffering from depression, anxiety or other mental health problems have a disadvantage that this policy makes worse. It is logically and substantively wrong.

Here is a fair rule that treats all athletes exactly the same: “Players are encouraged but not required to participate in the organizers’ press and promotional activities.” These bring tremendous rewards in publicity, reputation and sponsorship income, so anyone who declines must have a good reason. Organizers should apologize for their discriminatory action and return Ms. Osaka’s fine.

Donald W. Light
Princeton, N.J.
The writer is a research professor of psychiatry at the Rowan University School of Osteopathic Medicine.

Mourning for ‘At Home’

Although I do not mourn the passing of Covid-19, I do mourn the cessation of the At Home section in the Sunday print newspaper.

Many of us will continue to be “At Home.” We are the elderly. We are the disabled and the mobility-challenged. We are alone, we are poor, we lack transportation. We are continuing to work virtually. We are tied to our homes by infants, by ailing or elderly family members.

For us, the silver linings of Covid-19 — Zoom museum visits, book talks, tours, plays, lectures, concerts and, yes, the At Home section — have opened the world to us. The At Home section provided creative ideas for fulfillment despite our limitations, as well as a sense of solidarity, that we were all in this together.

Those of us who remain isolated would still benefit from the At Home section, so please bring it back, at least once in a while.

Kids With Autism Stuck in Lockdown

Re “C.D.C. Loosens Mask Guidance for Most Outdoor Activities at Summer Camps” (nytimes.com, May 30):

With its new guidance for summer camp, the C.D.C. provided the first glimmer of hope for children with disabilities like severe panic or sensory disorders that prevent them from wearing masks.

Too young to be vaccinated, these kids have been stranded in an ongoing human rights tragedy. They can’t fly on a plane. They’re not welcome at Disneyland. School districts are banishing some of them back to virtual, even if virtual can’t meet their special education needs. Parents are ever so sorry, but since these kids can’t wear a mask, play dates are a no-go.

In its new camp guidance, the C.D.C. has said unambiguously that mask precautions do not cancel the Americans With Disabilities Act.

Now it’s up to the rest of society to ensure that the new normal respects the value and dignity of all children, regardless of their individual abilities and needs.