Time and Donald Trump do interesting things to a man.

It’s almost impossible not to be thinking of Gore this week, with the words “Florida” and “recount” so prominent in the news, and it’s hard not to credit him with virtues absent in Trump and increasingly rare in politics these days.

Grace in defeat, for one. For another: a commitment to democracy greater than a concern for self.

Sure, the review of ballots that Gore’s campaign demanded in 2000, as he and George W. Bush waited tensely to see who would get the Sunshine State’s electoral votes and become president, was a rancorous affair lousy with recriminations.

But after the Supreme Court halted it, Gore didn’t reject that ruling as partisan, rant about rigged systems, rail about conspiracies or run around telling Americans that he was their rightful leader, foiled by dark forces. He felt that the stability of the country hinged on the calmness of his withdrawal. So he told Americans to move on.

Then he did likewise, a decision that seems positively exotic in retrospect.

Joe Biden, 75, is contemplating a third bid for the presidency, even though bids No. 1 and 2 raised questions about his ability to get to the finish line with both feet on the ground rather than one in his mouth. Bernie Sanders, 77, also seems to be mulling another run.

And there are people unconvinced that Hillary Clinton, 71, has fully surrendered her Oval Office dreams. Several prominent Democrats — including Mark Penn and Andrew Stein in an essay in The Wall Street Journal on Sunday — have suggested that she may give Hillary 2020 a whirl. While that’s highly doubtful, she hasn’t rushed to throw buckets of cold water on it.

Gore, 70, is younger than all of them. Like Clinton, he can proudly point to a lengthy political résumé — including senator and vice president, in his case — and to having won the popular vote. But while scores of Democrats are mentioned as possible contenders for the party’s next presidential nomination, he isn’t.

When a new try for the White House made the most sense for him, in 2004, he took a pass. There were many reasons, including this: His ambition had parameters, and he possessed the ability to cede the spotlight even when it was his to claim. Imagine that.

He wasn’t always easy to like. He could be patronizing and stiff. He exaggerated. His judgment wobbled. He let his disgust with Bill Clinton’s conduct eclipse his need for Clinton’s help.

But how quaint are those quibbles in the context of Trump? Trump is the yardstick by which every president and near president measures larger than before.

Gore is looking good — virtuous, visionary — in many ways. Wildfires are one again ravaging California, and if climate change isn’t the culprit, it’s an aggravating factor — an accomplice. Trump won’t go there. Gore went there decades ago. His documentary “An Inconvenient Truth,” about global warming, came out in 2006, a successor to his best-selling 1992 book “Earth in the Balance,” about our degradation of the environment. Both spoke to a passion and set of principles that transcended political expedience. Imagine that, too.

Imagine ending a long and celebrated marriage — as he and Tipper did, in 2010 — and having the restraint and discretion to prevent that from becoming anything close to a media spectacle. Imagine letting go of grudges to the extent that Gore did, at least in terms of his public comportment.

As The Times’s Patrick Healy wrote in a 2012 eulogy of sorts for Gore’s abandoned political career, “When people tell him that he would have governed differently than Mr. Bush, Mr. Gore usually replies, ‘You know what: I would have just made different mistakes.’” A close friend of Gore’s told Healy: “He doesn’t let his anger take priority over his policy obsessions, where he still believes he can make a difference.” 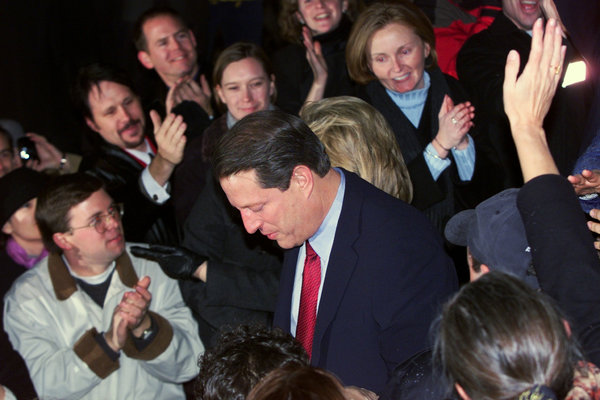 During the Florida recount in 2000, when the presidency was on the line, it took the Gore and Bush teams weeks to ratchet up their language to a level in the vicinity of where Trump and Rick Scott, the Florida governor, started out. Scott, running for the Senate, was trying to protect his lead over Bill Nelson, the Democratic incumbent, and increase the Republicans’ Senate majority. He and Trump quickly raised the specter of voter fraud and election theft even though Scott was poised to win, even though his narrow margin of victory compelled a recount under Florida law, and even though there was no real evidence of wrongdoing.

In Trump’s case, that’s unsurprising. He complained about illegal voting and a rigged result before Election Day 2016, presaging a refusal to accept the results as legitimate if he lost. He’ll almost surely do the same in his re-election effort.

“We’re in uncharted territory here,” Shaun Bowler, a professor of political science at the University of California, Riverside, told me. “Britons and Americans have been very smug for two or three generations now: ‘We know how to do democracy, and we’re committed to it.’ But in the last couple of years in both countries, that’s just not the case.”

Bowler, an expert in comparative electoral systems and voting behavior, said that many Americans and some politicians, especially on the right, “are drawing into question the legitimacy of the system as an election-winning tactic. They’re doing this for short-term gain without thought to long-term erosion.”

The greatest perils are a widespread loss of faith in the process and unwillingness to honor its outcomes. That was precisely what Gore sought to avoid in 2000. The Democratic strategist Chris Lehane, who was one of the Gore campaign’s principal spokesmen, recalled that Gore issued “an edict to the team not to do things that would question the integrity of our electoral system.” Lehane also reminded me of the previously reported detail that when the recount was stopped, Gore “emailed me on my BlackBerry: ‘Don’t trash the Supreme Court.’”

In an interview with The Washington Post in 2002, Gore noted that he could have “launched a four-year rear-guard guerrilla campaign to undermine the legitimacy of the Bush presidency, and to mobilize for a rematch.” Some people urged that. But, Gore added, “There’s so much riding on the success of any American president and taking the reins of power and holding them firmly, I just didn’t feel like it was in the best interest of the United States, or that it was a responsible course of action.”

Those read like lines from some fairy tale at this point, and so do parts of his concession speech shortly after the Supreme Court ruling. “I accept the finality of this outcome,” he said. “This is America, and we put country before party.”

We do? Maybe we did. I thank Gore for the reminder.

Frank Bruni has been with The Times since 1995 and held a variety of jobs — including White House reporter, Rome bureau chief and chief restaurant critic — before becoming a columnist in 2011. He is the author of three best-selling books.  @FrankBruni • Facebook