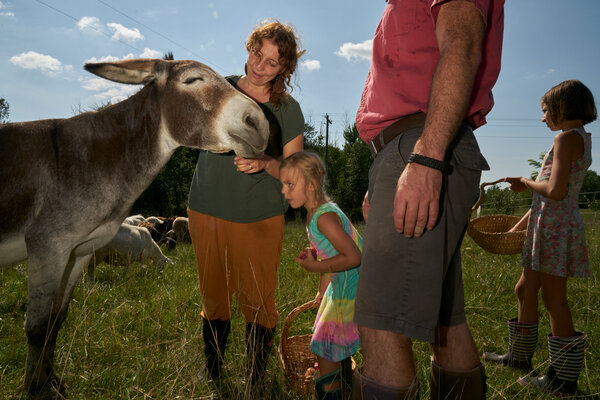 Ms. Sowder is the creator of Wildschooling.

Throughout the first five years of my older daughter’s life, I watched her dance through the clover, climb trees, puddle jump and play her way through the day. As she stood on the threshold to kindergarten, I pictured her stuck inside at a desk, cut off from her relationship to the wild, and my stomach sank. I believe that school is for nurturing children’s innate talents and helping them figure out where those gifts, necessarily diverse, fit in the whole. The school system, by contrast, tends to produce a monoculture. Despite the heroic efforts of many thoughtful, caring teachers, public school mostly prepares children to be obedient workers and fails millions of students who don’t fit the mold.

So I developed a method called Wildschooling, a form of home-schooling that celebrates an interconnected, relational view of nature, which I now practice with my two daughters and two nieces on our farm near Cedar Springs, Mich. We’re hardly the first people to approach education this way; numerous earth-centered cultures, such as the Anishinabe of our region, and Richard Louv, the author of “Last Child in the Woods,” are just a few important influences.

Wildschooling looks different for each family. If you browse the Facebook group I started six years ago, 90,000 members strong now, there are single parents and city dwellers practicing it all over the world. And while it’s a privilege to undertake any form of home-schooling, Wildschooling does not require a rural setting or big backyard. As long as you’ve got a tree on your block or a community garden nearby, you can Wildschool.

For us, a typical day begins by going outside and getting some sunshine on our faces. Then we orient ourselves to where we are in the moon cycle and the solar calendar. This helps us stay anchored and know where we are in the big picture. While most children are going back to school right now, we’ve been in session since the winter solstice. As the days grow longer, so does our knowledge. Once we pass the summer solstice and the light begins to fade, we start reviewing our lessons.

Sometimes, people assume that Wildschooling means there are no lessons or that it means letting your children run aimlessly through the woods. My girls do plenty of running around — usually after lunch for about two hours — but in the mornings, we do a standard math curriculum and practice our music. Right now we are learning to sing and to play piano and violin. Violin is taught by a fellow home-schooler who is 13.

After math and music, we do our farm chores, like gathering eggs and harvesting the never-ending supply of zucchini from the garden. We recently had to build a new chicken coop, which became a lesson on how to use graph paper to draft something to scale. Once you start approaching learning this way, you realize life is the curriculum. If we need to write a letter to someone, for example, we’ll learn how to write a letter. If the frogs are singing, we’ll learn about frogs.

When children start Wildschooling, I’ve noticed that their sense of themselves transforms. They begin to see themselves as the individuals they are — radically themselves and essential to the whole. They see that nature is lopsided, that nature has specialties. It’s a very different situation from sitting in a classroom and comparing yourself with other humans.

And while it may seem unusual, at first, to design school around nature, research attests to the benefits: Nature-based learning leads to academic, cognitive, psychological and social gains, even when factors like class are controlled for. Interestingly, the mechanism at play is not entirely understood, although some researchers have postulated that nature-relatedness, or connection to nature, may be a basic human need.

At the same time, we’re only just beginning to understand the downsides of traditional schooling. This year, a major study following nearly 3,000 low-income children in Tennessee found that students who had gone to pre-K scored worse in third grade than those who had not. By the end of sixth grade, as NPR reported, the students who had gone to pre-K “had lower test scores, were more likely to be in special education and were more likely to get into trouble in school, including serious trouble like suspensions.”

How can this be? According to Dale Farran, one of the lead researchers, children in formal pre-K, who may be required to line up to go to the bathroom or walk silently through the halls, are possibly developing an “allergic reaction” to control, which could explain the discipline problems seen later in life. By contrast, Dr. Farran noted, wealthier families tend to pick play-based preschool programs that emphasize creativity, movement and nature.

In a healthy society, all children should have access to this kind of education. When I watch how active my kids are, my heart hurts to think of how little they would be able to move if they were in school. Or how quiet they would have to be. My 10-year-old daughter, in particular, loves to sing. She sings in the morning, she sings in the afternoon, she sings at night. She loves to memorize songs and is even beginning to write them. It’s spontaneous; it makes her who she is. If she were in school, she would have to consciously repress this part of herself.

Back when my husband and I bought our farm, we thought we were going to heal the land by applying the principles of regenerative agriculture. But every time my children get upset and we walk out to their favorite tree to calm down, I realize the land is healing us more than we are healing it. My girls can learn math, and they can learn violin. But nothing will ever matter more than their being able to take responsibility for their lives and feeling as if they are part of something bigger than themselves.

Nicolette Sowder is the creator of Wildschooling.