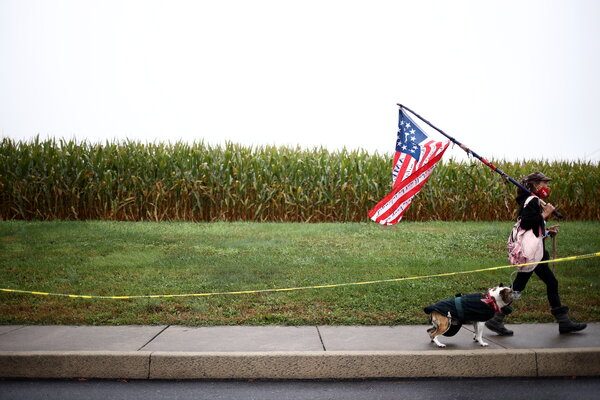 The morning after President Trump announced his coronavirus diagnosis, a relative who supports him texted me. “OMG Trump,” she wrote. “It’s the end.”

My relative was adamant that Mr. Trump’s bid for a second term was finished. So adamant, actually, that it sounded as if she wanted it to be over.

I noticed a similar attitude of resignation, even relief, from Trump supporters I follow on social media. They expressed strangely little anxiety that Mr. Trump would get very sick or die. Compassion for his suffering, yes. Anger at Democrats’ schadenfreude, yes. But no fear he would be swept off the political stage. My relative mentioned she was listening to Rush Limbaugh’s radio show. The gist of the segment, she said, was that “love him or hate him, Trump was larger than life.”

She made Mr. Limbaugh’s monologue sound like a eulogy, and I tuned in just in time for a caller to tell the pro-Trump host: “I would have thought you were eulogizing the president.” You were talking about him, the caller continued, “like he was in the past tense.”

I grew up in a conservative social circle, and I talk weekly with friends and family who voted for Mr. Trump. His approval rating has come in consistently around 40 percent, which leads many to conclude that Americans who like him support him staunchly. But I’ve come to believe that some people who publicly support the president don’t fully want him to win. They have to put up a fight for their sense of dignity. But even those who definitely plan to vote for him again privately admit ambivalence or even a wish that he could be magically swept out of the White House without a straightforward ballot-box defeat.

Commentators focus on a category they call “shy Trump voters.” These are voters who supposedly support Mr. Trump but won’t acknowledge it publicly. But I think there’s another category developing under the radar: “Shy Trump doubters.”

These are public Trump fans who, in private, acknowledge that his tweets are humiliating, his crowing about his victories is tasteless, his policy flip-flops are dispiriting and some of his statements are hurtful and damaging. They won’t say they’re tired of him to a pollster. It can be as embarrassing to admit you liked Mr. Trump and now fear him as it was to admit you were attracted to him in the first place. Mr. Trump’s critics portray his supporters as fools, and to say you only now realized he has problems seems to concede the point.

Trump ambivalence goes back to 2016. The morning after his victory, a friend who voted for him sent me an anxious Facebook message: “This [presidency] is going to be weird.” He had wanted the election to be tight to serve as a rebuke to Hillary Clinton and to supporters who preened about her inevitability. But my friend had believed the polls. He didn’t actually like Mr. Trump. His vote was a protest.

My relative was more upset. She called me near tears. “What’s going to happen to your health care?” she asked. (I rely on the Affordable Care Act.) She never thought Mr. Trump would occupy the White House. Her vote was a form of trolling.

She might admit this sounds juvenile, but she felt Democrats deserved it. In her view, the American left had long denied being moralistic while acting relentlessly moralizing. Early in 2016, yard signs sprung up in her majority-Democratic neighborhood: “Hate Has No Home Here” and “In This House, We Believe No Human Is Illegal, Love Is Love, and Science Is Real.” They implied that, if you didn’t put up such a sign, you were a monster and your home was filled with hatred, or if you questioned whether paper straws made a serious difference to the environment you “didn’t believe in science.”

Democrats seemed to display an “extreme moral vehemence” matched with a vehement denial that they were intolerant. “I thought there were a lot of people going around saying things they didn’t really believe. They didn’t seem to feel any contradiction between their own conspicuous consumption and their leftism.” Her perception was that they frequently demanded apologies from conservatives, but “the apologies never did those people any good.” President Bill Clinton was a prime example of this double standard; he represented a party that insisted it — and only it — supported women’s empowerment while he preyed on a female intern.

Not long into the Trump presidency, though, my relative began to talk about what would happen if he were “driven out of office.” Other Trump-supporting friends used this phrasing, too, and I began to wonder if it was a sublimated yearning. It would accomplish two things: first, make Mr. Trump a martyr to leftist intolerance, and second, get him out of office.

Their perception of Mr. Trump — crude, immodest and uncontrolled — had always been far closer to the Democrats’ portrayal than Democrats seemed to understand; during his campaign, they found it funny when people bent over backward to prove he was vulgar. Trump fans knew that — it was the point. His crudeness drove Democrats crazy and, in these voters’ view, revealed their true colors, driving them into a moralistic frenzy over “norms” and “decency.”

Mr. Trump’s shtick became less satisfying when he was president. My relative found his demonizing of Baltimore appalling and confessed she’d had to stop looking at his tweets. “Reagan was very genteel,” another pro-Trump friend complained to me — very much unlike Mr. Trump.

But how do you admit you used your ballot — that sacred thing in a democracy — as a weapon to prod your adversaries?

Many Americans who oppose Trump have spent the past four years asking, “How could so many of my countrymen love this man so much?” The answer may be simpler than we expect: a lot of them don’t.

Perhaps it is actually disturbing to consider that Trump fans’ intense public enthusiasm may be a front, because that would mean a proportion of them had a wish to throw the country into chaos. They don’t think America looks good right now, either. They think it looks bad, and they possessed — and probably still possess — such anger and cynicism about American politics that they risked a conflagration.

It’s worth listening for shy doubt about Trump, though, because it still provides an opening. There might be more agreement right now than we realize. That doesn’t mean all or even most shy Trump doubters will abandon him at the ballot box — I suspect most won’t.

But it is something in an era in which we believe people with different politics live in separate realities. There may be one dominant reality, and it’s one in which Mr. Trump, as president, has been a misfortune.

Eve Fairbanks has contributed to The New Republic, The Washington Post and other publications and is working on a book about South Africa.

A BOSS in the Boohoo fashion empire last night apologised for flouting lockdown rules with a champagne dinner party. Sam Helligso celebrated cashing in on…