WASHINGTON — Roger Stone has always lived in a dog-eat-dog world.

So it was apt that he was charged with skulduggery in part for threatening to kidnap a therapy dog, a fluffy, sweet-faced Coton de Tuléar, belonging to Randy Credico, a New York radio host.

Robert Mueller believes that Credico, a pal of Julian Assange, served as an intermediary with WikiLeaks for Stone. Mueller’s indictment charges that Stone called Credico “a rat” and “a stoolie” because he believed that the radio host was not going to back up what the special counsel says is Stone’s false story about contacts with WikiLeaks, which disseminated Russia’s hacked emails from the D.N.C. and Hillary Clinton’s campaign chairman.

Stone emailed Credico that he would “take that dog away from you,” the indictment says, later adding: “I am so ready. Let’s get it on. Prepare to die (expletive).”

As the owner of two Yorkies, Stone clearly knows how scary it is when a beloved dog is in harm’s way. When he emerged from court on Friday, he immediately complained that F.B.I. agents had “terrorized” his dogs when they came to arrest him at dawn at his home in Fort Lauderdale.

The last thing Stone posted on Instagram before his arrest was a video of a terrier, with a high-pitched voice-over, protesting, “Roger Stone did nothing wrong.”

Always bespoke and natty, living by the mantra that it’s better to be infamous than never famous, Stone looked strangely unadorned as he came out of court to meet the press in a navy polo shirt and bluejeans.

As the master of darkness who had been captured in darkness stepped into the bright light of Fort Lauderdale, he was his usual flamboyant, unapologetically meretricious self. He proclaimed his innocence, flashed the Nixon victory sign and reiterated the old saw from his mentor, Roy Cohn, that any attention is good attention.

But it fell flat. Being Roger Stone had finally caught up with him. 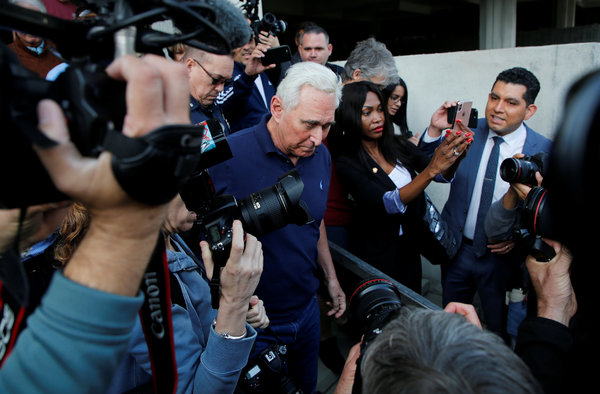 He has always said Florida suited him because “it was a sunny place for shady people,” borrowing a Somerset Maugham line. But now the cat’s cradle of lies and dirty tricks had tripped up the putative dognapper. And it went down on the very same day that Paul Manafort — his former associate in a seamy lobbying firm with rancid dictators as clients, and then later his pal in the seamy campaign of Donald Trump — was also in federal court on charges related to the Mueller probe. Manafort’s hair is now almost completely white.

One of Stone’s rules — along with soaking his martini olives in vermouth and never wearing a double-breasted suit with a button-down collar — is “Deny, deny, deny.” But his arrest for lying, obstructing and witness tampering raised the inevitable question about his on-and-off friend in the White House, the man who is the last jigsaw-puzzle piece in the investigation of Trumpworld’s alleged coordination with Russia: Is being Donald Trump finally about to catch up with Donald Trump?

Stone, who famously has Nixon’s face tattooed on his back, is the agent provocateur who is the through line from Nixon, and his impeachment, to Trump, and his possible impeachment.

As Manafort said in the 2017 documentary “Get Me Roger Stone,” Trump and Stone “see the world in a very similar way.” And that way is theatrical and cynical. Do whatever you have to do to get what you want; playing by the rules is for suckers.

In 1999, when I went on a trip to Miami to watch Trump test the presidential waters, Stone orchestrated Trump’s Castro-bashing speech to Cuban-Americans. The bodybuilding, swinging strategist, christened “the state-of-the-art sleazeball” by The New Republic in the 80s, said he was “a jockey looking for a horse.”

Stone, who was mixed up in Watergate at the tender age of 19, “made the transition from the Stone Age of dirty tricks to today,” as David Axelrod puts it.

For decades, believing “past is prologue,” Stone urged Trump to be the successor to those pols, revving up angry, white working-class voters who felt belittled or scared of “the other.” It would be so easy to divide and stoke resentment, as Stone and Trump proved when they inflamed the birther controversy against Barack Obama.

“Hate is a stronger motivator than love,” Stone told the documentarians. “Human nature has never changed.”

The tribal tensions in America made Stone’s favorite tricks easier than ever; he didn’t have to operate in the shadows. He wore a T-shirt with Bill Clinton and the word “Rape” at 2016 campaign rallies. As Stone boasted in the documentary, his “slash-and-burn” tactics “are now in vogue.”

Trump has had periods of estrangement with Stone. In 2008, in an interview with The New Yorker, he called the strategist “a stone-cold loser,” a state Trump himself has been relegated to this past week, courtesy of Nancy Pelosi.

At the moment, though, dogged by Mueller, Stone and Manafort are the dog’s breakfast. The pair has given practicing the dark arts a bad name.