HONG KONG — Across the street that was about to become a battlefield, forces massed on each side tensely adjusted their gas masks, nervously fiddled with their weapons.

The riot police, with pistols at their hips, were ready with tear-gas grenade launchers and guns loaded with rubber bullets. Down the street, young pro-democracy protesters set up barriers to slow the police, and stretched fishing line across the road to trip them.

Both sides wore helmets and gas masks, and both clutched sticks or truncheons. Then the police charged and a sedate neighborhood erupted into a fury of tear gas, flying rocks and Molotov cocktails.

The Hong Kong and Chinese governments have mishandled these protests from the beginning, and both sides are now escalating and becoming increasingly violent. That face-off on the street was a microcosm of a larger standoff between China’s president, Xi Jinping, determined to impose his kind of order, and countless Hong Kongers, equally determined to breathe freely.

My heart is with the protesters. Hong Kongers are highly educated and of course they deserve the right to choose their leaders. China under Xi has been nibbling away at Hong Kong’s autonomy, just as he has been ratcheting up repression at home — so it’s impossible not to be inspired by up to two million brave Hong Kongers marching to gain rights that are taken for granted in so much of the world.

When a small, skinny man in shorts and a tank top stood with his arms outstretched to try to protect protesters from a police officer pointing a gun at them — the scene of an unforgettable photo — how could we not be moved?

But I also feel a sense of foreboding. It’s probably only a matter of time before someone is killed, and that will unleash a new cycle of recrimination, escalation and violence. There are so many parallels to the Tiananmen student democracy movement that I covered in China 30 years ago — and I wonder if Beijing may ultimately deploy troops, perhaps from the paramilitary People’s Armed Police, to crush these protests as well.

As with the 1989 Tiananmen protests, these in Hong Kong are partly about democracy but also about economic frustrations. The average Hong Konger enjoys housing space of only 160 square feet, just a hair bigger than the average New York City parking space.

As in 1989, these protests snowballed because of government mishandling and arrogance. China’s hard line has also deeply antagonized Hong Kongers. Graffiti everywhere denounce “ChiNazi” influence, and people scold me when I refer to the population here with the old, familiar term of “Hong Kong Chinese.” No, people object: We’re not Chinese. Say “Hong Konger.”

Thus one of Xi’s legacies: He has tarnished the word “Chinese.”

Hong Kong’s police have sometimes been restrained, other times heavy handed, firing tear-gas grenades in ways that experts say are dangerous and excessive. The authorities are also accused of using more than 100 Chinese gangsters, known as triads, to do their dirty work and club and disperse protesters.

The Hong Kong chief executive, Carrie Lam, who has all the charisma of a fish in a tank in a Cantonese restaurant, is generally regarded as having bungled the affair from the beginning. Her next step may be to invoke emergency powers — akin to martial law — and crack down further on dissent; this may just backfire and inflame the protests. 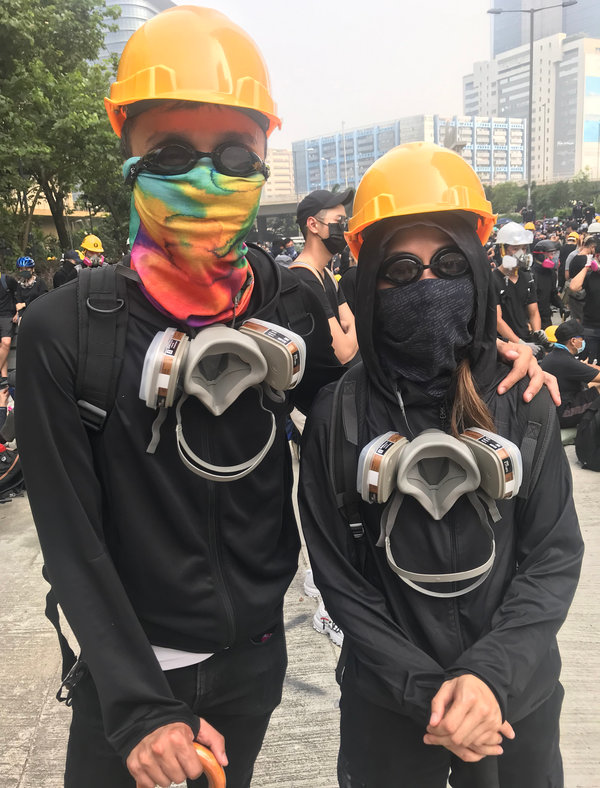 On the other side, protesters have also escalated their tactics and become increasingly violent. More and more people — although still a tiny minority of the overall pool of protesters — hurl rocks or Molotov cocktails at the police. Hong Kongers say they have absorbed the lesson that the government pays no attention to purely peaceful demonstrations. I believe the violence is a mistake that increases the risk of a crackdown, but the public frustration is so great that I found few people ready to condemn it.

One more eerie parallel with Tiananmen: Many protesters scoff at the possibility of a military crackdown.

“Western pressure will prevent a Tiananmen from happening here,” a 29-year-old man told me during a march the other day.

A young couple, Charles and Cindy, came out in matching helmets, gas masks and goggles to stand up for democracy, but they told me that Beijing would never use force to crush the protests.

“The free world will support Hong Kong,” Charles told me. And Cindy pointed to Hong Kong’s economic importance to China, adding, “We are still very valuable to them.”

True enough, and people often say that China will never kill the goose that lays golden eggs. But as Chris Patten, the last British governor of Hong Kong, once dryly noted, that phrase came into existence only because “history is littered with the carcasses of decapitated geese.”

In the run-up to the massacres of 1989, idealistic protesters often told me that their cause was invincible. And then I watched tanks roll over righteousness.