WARSAW — Last weekend a coalition of opposition parties in Poland solidified the results of a stunning mayoral election season: In several major cities, including Warsaw, the opposition defeated the ruling Law and Justice party, a populist, anti-immigrant party led by Jaroslaw Kaczynski.

Mr. Kaczynski’s party remains in control, for now, and it has touted its tightened hold on many of the country’s rural districts. But in all but the smallest cities, it is in free-fall.

During the first round of voting, on Oct. 21, Law and Justice lost the mayoral races in Warsaw, Lodz, Poznan, Wroclaw, Lublin and some two-thirds of Poland’s other urban districts. Things got worse in the Nov. 4 runoffs, when the opposition won in Gdansk, Krakow, Szczecin, Kielce and Radom.

Even the prime minister’s sister, Anna Morawiecka, who ran for mayor of the provincial town of Oborniki Slaskie, lost to an opposition candidate who defeated her with 70 percent of the vote. In total, of the 107 cities where voters choose “presidents” — more or less the country’s largest cities — Law and Justice won just six, and small ones at that.

Although Mr. Kaczynski’s Law and Justice party obtained the highest level of support — 34 percent — in the elections to Poland’s 16 provincial assemblies, the second-place Citizens’ Coalition was only seven points behind, at 28 percent. The third- and fourth-strongest showings were also by opposition parties — the Polish People’s Party, with 13 percent, and the Democratic Left Alliance, with 6.6 percent.

As a result, the majority of the provincial assemblies (nine or ten of the 16) will be controlled by the opposition. Local elections in Poland are highly significant, as provincial assemblies control the disbursement of European Union funds (of which Poland is the largest beneficiary, receiving some 14 billion euro annually) and perform other key functions. Tellingly, they closely resemble parliamentary elections — which Poland will hold next fall.

The results show that Law and Justice can count on only roughly a third of the vote in Poland. If next year’s parliamentary election were held today, the party would be pushed out of power. Whether it can come back over the next 12 months depends on how well the opposition can take advantage of the situation. 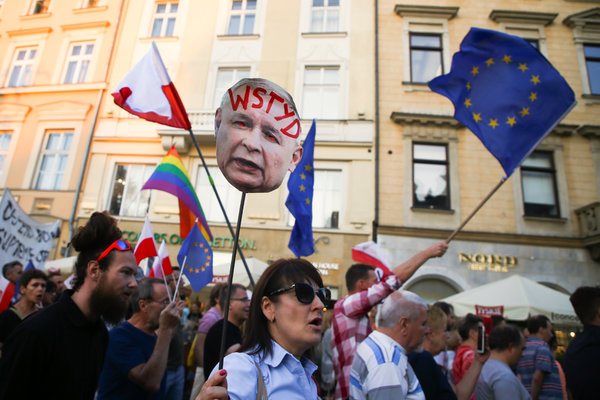 In recent years Law and Justice has taken a series of antidemocratic moves to solidify its hold on power, and it was counting on a victory in these local elections to establish complete control over Poland.

That is why the ruling party threw all its efforts into the campaign. Publicly supported news media, which has been completely subordinated to Law and Justice, brutally attacked the opposition throughout the campaign. It especially targeted the agrarian Polish People’s Party, calling for its “elimination from the political scene.”

This attack on the Polish People’s Party proved to be a grave political error. It precludes the possibility of cooperation between the two parties — effectively depriving Mr. Kaczynski of his only potential coalition partner and uniting the opposition.

The entire ministerial cabinet was out on the campaign trail. The candidates promised new metro lines, or new residential developments, seemingly from thin air. Law and Justice also issued threats, even suggesting that Warsaw, the capital, would be cut off from subsidies from the national government if the city failed to elect the ruling party’s candidate for mayor. At the end it resorted to the strategy that had proved successful in Hungary: raising the specter of a flood of refugees who would rape, attack and plunder Poland. But this backfired as well, boosting turnout for opposition candidates.

Indeed, the opposition owes its strong showing to an exceptionally mobilized electorate. There were long lines outside of polling places for the first time since 1989. Voter turnout broke the post-1989 record, reaching 55 percent (as opposed to 47 percent four years ago).

Law and Justice committed several fundamental errors. It turns out that even populism can be overdone. The ruling party’s propaganda evolved into ostentatious lies. To add insult to injury, Zbigniew Ziobro, the minister of justice, ordered the Constitutional Tribunal to examine the constitutionality of European Union agreements, which many voters saw as a first step toward a potential “Polexit.” That might be a move from the populist playbook, but it’s a mistake: Support for European integration in Poland exceeds 80 percent, the highest in Europe.

It was also a mistake to designate Prime Minister Mateusz Morawiecki as the leader of the campaign. A former banker, he proved ineffective in connecting to voters in villages and small towns.

It is difficult to overstate the ramifications of these recent elections, and Law and Justice’s failure to win them. The opposition has had its first success in three years, demonstrating that it knows how to win, and now has wind in its sails.

The opposition’s greatest problem, until now, has been its lack of popular leaders. But these elections have given the coalition a group of rising stars. The new mayors of Warsaw and Lodz, Rafal Trzaskowski and Hanna Zdanowska, will become engines of the opposition. Even the leader of the Civic Platform party, Grzegorz Schetyna, who had been accused of lacking charisma, has demonstrated his electoral effectiveness.

Law and Justice, meanwhile, lost or significantly undermined several of its leaders. Prime Minister Morawiecki appears most compromised, and it’s unclear who will lead the party’s political effort between now and the next vote.

Moreover, the electoral calendar is highly favorable to the opposition. The elections to the European Parliament, in May 2019, will be a de facto plebiscite on the European Union. Given the E.U.’s popularity, the opposition can expect to defeat Law and Justice, assuming it can present a united front. A win in those elections will give the opposition even more momentum as Poland heads toward the parliamentary elections in the fall, followed by the presidential election in 2020.

Opposition politicians would like to see Donald Tusk, a former prime minister and a co-founder of Civil Platform, as their presidential candidate. He might agree — Mr. Tusk, who serves as the president of the European Council, has already announced that upon his return to Poland he “does not intend to merely observe politics in the media.”

The opposition, largely composed of liberal and center-left groups, has already succeeded in neutralizing the two issues that had given Law and Justice so much power over the past decade: boosting expensive social programs and stoking the fear of refugees. After the mayoral elections, it seems voters no longer find these issues compelling. Socialism and nationalism can lose to liberalism.

The European Union has been watching the Polish elections carefully, and it is likely to throw even more support behind the pro-Europe opposition. With its large population and geographically central location, Poland is a kind of swing state that can turn the tide across Eastern Europe. If populism is defeated in Poland, maybe it can be defeated elsewhere.

Slawomir Sierakowski is a sociologist, a founder of the Krytyka Polityczna movement and the director of the Institute for Advanced Study in Warsaw. He is a fellow at the Robert Bosch Academy.