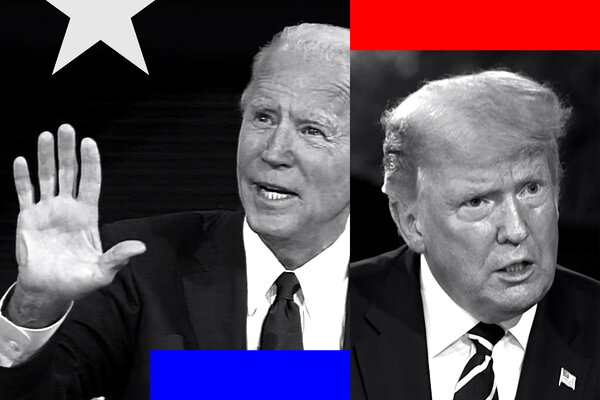 Welcome to Opinion’s commentary for the town halls featuring Donald Trump and Joe Biden. In this special feature, Times Opinion writers rate the event on a scale of 1 to 10: 1 means it was a snooze; 10 means it was must-see TV. Here’s what our columnists and contributors thought of the town halls.

Frank Bruni (Score: 2) For the first half-hour, I struggled to retain consciousness. By the last half-hour, I had plunged into a state of political somnambulism I last visited when Steve Forbes ran for president two decades ago. In other words, Joe Biden had an excellent night. My low rating for how compelling his performance was equals a high rating for how smart it was. Biden is protecting a lead, which argues for finessing answers to tough questions (check), giving weedy answers that run out the clock (check), splitting the difference between the center and the left (check) and oozing sincerity and warmth (check, check). Also, what a contrast: His face never reddened. His voice never rose. Please, please, four years of this.

Michelle Goldberg (Score: 7) Look, it was boring, but in a deeply soothing way. Joe Biden was unusually fluent and wonky, especially on foreign policy. He was even good on weak parts of his record like the 1994 crime bill. I don’t believe for a second that, as he insisted, four to eight Republican senators would be willing to compromise with a Biden administration, but I suspect his promises of bipartisanship go over well with swing voters. And he finally gave a semi-straight answer on court packing, saying, of the Amy Coney Barrett confirmation, “It depends on how this turns out.” The Trump adviser Mercedes Schlapp tweeted that the town hall “feels like I am watching an episode of ‘Mister Rodgers’ Neighborhood.’ ” Apparently she thinks that’s a bad thing.

Melanye Price (Score: 7) After listening to Trump’s platitudes and chaos for four years, I thought Biden’s informed discussion was refreshing and almost overstimulating!

Peter Wehner (Score: 7.5) Biden was sharp — in command of the facts, engaged and reassuring, likable, vulnerable and modest. What came through most clearly was his good character, his core decency and empathy, and his sheer normalcy. Biden’s temperament and disposition are just what America needs after four years of the sociopathic presidency of Donald Trump.

Frank Bruni Early on, when I was at peak alertness, Biden digressed from a recitation of pandemic-related counsel that he’d given to offer an apology of sorts: “I don’t want to say ‘I, I, I.’” How refreshing. Take the first-person singular away from President Trump and you’ve gutted his entire vocabulary. Biden’s one possible misstep? An apparent promise to take a firm stance before Election Day about expanding the Supreme Court.

Michelle Goldberg When it was over, Biden put his mask on and kept up a (socially distanced) dialogue with the audience. I wish ABC had left the audio on, but even without it, the visual showed how comfortable he is connecting with normal people, in contrast to our cloistered and emotionally stunted president.

Melanye Price He missed an opportunity with his answer to the young Black man (a key demographic), leaving the young man clearly unconvinced despite being too polite to say so.

Peter Wehner Biden’s best moments came when he spoke not about policy but about concepts like honor and decency, why holding grudges never works and his commitment to heal a weary and wounded nation. My guess is that most Americans who watched came away feeling they got a glimpse into who Joe Biden is in some fundamentally important way and what they saw was deeply reassuring and comforting. Sometimes you get the sense that the person and the moment match, and that is how I increasingly feel about Biden in 2020. Who knew?

Elizabeth Bruenig (Score: 3) Neither amusing nor informative, the entire production was one long low point. The moderator, Savannah Guthrie, was aggressive, which is probably the only way to handle an interviewee as unruly as Trump, but the president was, as ever, himself. The net effect was watching an hourlong verbal altercation in which bickering periodically gave way to timorous questions from well-meaning voters, which did nothing but make the tension more unbearable.

Matthew Continetti (Score: 7) Trump’s closing argument. He made a case for a second term based on the economic and foreign policy achievements that preceded the onset of the coronavirus pandemic. He spent much of the event on defense, but the final moments offered Trump a chance to remind undecided voters about the pre-Covid world and project optimism about the future. Trump spent a lot of time parrying the moderator’s follow-up questions and rebuttals. The back-and-forth denied him opportunities to shift focus to the Biden-Harris agenda and draw contrasts with the Democratic ticket. But Trump avoided a repeat of the debacle at the first debate.

Michelle Cottle (Score: 3) The president looked and sounded healthy, enabling him to spew his fountain of misinformation with vigor.

Daniel McCarthy (Score 7) The adversarial interactions between President Trump and Savannah Guthrie were a reminder that the president is running against much more than Joe Biden. It’s not objectivity vs. Trump’s subjectivity, however. It’s one subjectivity — one forgiving toward the political establishment — vs. Trump’s subjectivity. And this clash forces Americans to be more critical in their media consumption as well as politics: a good thing.

Elizabeth Bruenig Trump could’ve defused the question of whether or not he disavows white supremacists by disavowing white supremacists in an emphatic and straightforward way or, to dream even bigger, by first apologizing for having given the impression he feels any differently. Instead, clearly offended and put-upon, Trump offhandedly disavowed white supremacy and then listed all sorts of other things he disavows, including antifa and rioters, before fuming about why nobody else gets asked if they disavow white supremacists. I stand to win $15 if this waste of time culminates in Trump complaining on Twitter about Guthrie’s meanness, drawing further attention to an unwatchable drag.

Matthew Continetti The best part of the 2020 campaign has been the everyday voters who find themselves in the media spotlight. All of the voters at the NBC town hall asked poised and intelligent questions. But I will always remember the voter who complimented the presidential smile and the anonymous woman sitting behind Trump who nodded hypnotically at his every word while shaking her head in disappointment at the moderator’s interjections. I have a feeling I know how they will both vote in November.

Michelle Cottle So many bad moments to choose from. Maybe the worst was when Trump not only declined to denounce the QAnon nutters but also gushed about how great it is that they are anti-pedophilia — because he feels the same way! It was also bad when he pretended that there is serious dispute about the public health benefits of wearing masks, based largely on some encounter he had with a waiter. Also not good: when he said that people should decide for themselves whether to believe his retweet of a conspiracy theory that President Obama had SEAL team 6 killed to cover up that Osama bin Laden isn’t really dead. It was predictably appalling when he doubled down on his claims that there is massive voter fraud taking place. And all that is before you get into his policy tap dancing on issue like pre-existing conditions and immigration. In short: the usual Trumpian bullfest.

Daniel McCarthy The best moment was President Trump’s insistence that he wouldn’t try to set expectations for Amy Coney Barrett’s rulings. He could have said what his base wanted to hear, or he could have said something vague and pleasing to all. Instead he said something true and displeasing — judges should not be proxies for political questions. (And political questions, by implication, belong in politics, not courts.)

Matthew Continetti (@continetti) is a resident fellow at the American Enterprise Institute.

Michelle Cottle (@mcottle) is a member of the editorial board.

Daniel McCarthy (@ToryAnarchist) is the editor of Modern Age: A Conservative Quarterly.

Melanye Price (@ProfMTP), a professor of political science at Prairie View A&M University in Texas, is the author, most recently, of “The Race Whisperer: Barack Obama and the Political Uses of Race.”

Peter Wehner (@Peter_Wehner), a senior fellow at the Ethics and Public Policy Center who served in the previous three Republican administrations, is a contributing opinion writer and the author of “The Death of Politics: How to Heal Our Frayed Republic After Trump.”