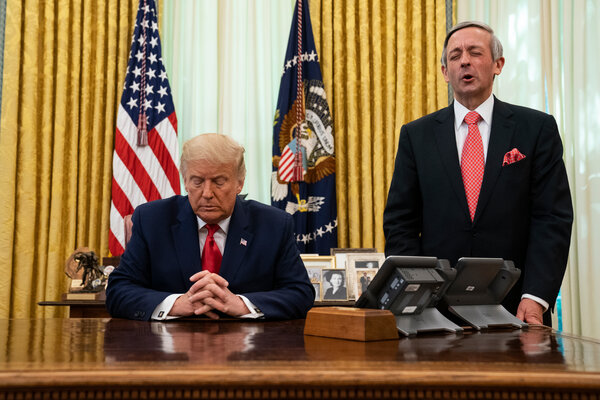 There have been encouraging signs lately of influential evangelicals inching away from Donald Trump.

The Washington Post last month quoted a self-pitying essay by Mike Evans, a former member of Trump’s evangelical advisory board, who wrote: “He used us to win the White House. We had to close our mouths and eyes when he said things that horrified us.” Religion News Service reported that David Lane, the leader of a group devoted to getting conservative Christian pastors into office, recently sent out an email criticizing Trump for subordinating his MAGA vision “to personal grievances and self-importance.” On Monday, Semafor quoted Bob Vander Plaats, a prominent Christian conservative activist in Iowa, saying that evangelicals weren’t sure that Trump could win.

Even Robert Jeffress, a Dallas televangelist whom Texas Monthly once described as “Trump’s Apostle,” is holding off on endorsing him again, telling Newsweek that he doesn’t want to be part of a Republican civil war.

Because I see the ex-president as a uniquely catastrophic figure — more likely to lose in 2024 than the current elite Republican favorite Ron DeSantis, but also more likely to destroy the country if he prevails — I’ve eagerly followed the fracturing of his evangelical support. But Russell Moore, the editor in chief of Christianity Today, told me he doesn’t yet take evangelical distancing from Trump seriously. After all, he pointed out, we’ve been in a similar place before.

At the start of Trump’s first campaign for president, few important evangelical figures backed him. “What changed was an increase in the number of grass-roots evangelical voters who started to support Donald Trump,” Moore said. “It’s not that the leaders embrace a candidate and therefore their followers do. It’s really the reverse.”

Moore is the rare evangelical leader who has consistently opposed Trump, a stance that nearly cost him his former job as president of the Ethics & Religious Liberty Commission of the Southern Baptist Convention. (He left the Convention in 2021 over its handling of sexual abuse and white nationalism in the church.) Moore suspects that if the base of the Christian right, which over the last six years has forged a quasi-mystical connection with the profane ex-president, decides to stick with Trump, the qualms of their would-be leaders will evaporate. “I just don’t read a lot into reluctance anymore, because I’ve seen reluctance that immediately bounces back, after ‘Access Hollywood,’ for instance, or after Jan. 6,” said Moore.

What matters, then, are the sentiments of ordinary evangelicals. A recent survey by the Public Religion Research Institute found right-leaning white evangelical voters closely divided in their Republican primary preferences: 49 percent want Trump to be the nominee, while 50 percent want someone else. But Moore thinks most rank-and-file evangelicals aren’t focused on presidential politics yet, so it’s too soon to know which direction they’ll go.

The last six years, said Moore, has changed the character of conservative evangelicalism, making it at once more militant and more apocalyptic — in other words, more Trump-like. For some people, Trump may even be the impetus for their faith: a Pew survey found that 16 percent of white Trump supporters who didn’t identify as born-again or evangelical in 2016 had adopted those designations by 2020.

“I see much more dismissal of Sermon on the Mount characteristics among some Christians than we would have seen before,” Moore said, referring to Jesus’ exhortation to turn the other cheek and love your enemies. There is instead, Moore said, “an idea of kindness as weakness.” Pastors have spoken to Moore about getting blowback from their congregants for preaching biblical ideas about mercy, with people saying, “That doesn’t work anymore, in a culture as hostile as this.”

Meanwhile, said Moore, some of those inspired by Jesus’ radical compassion are leaving the church. There have always been evangelicals who become disillusioned, said Moore, often because they “didn’t believe in the supernatural anymore, or couldn’t accept moral teachings of the church anymore.” But now, he said, “I find more and more young evangelicals who think the church itself is immoral.” Speaking of the new, pro-Trump recruits to evangelicalism, Moore said, “If the trade-off is getting more of them and losing some of the really best of our young people because they’re associating Jesus with this, that’s not a good trade.”

The trade, of course, is much like the one the Republican Party made in choosing to subordinate itself to Trump. Contrary to Evans’s lament, no one had to close his mouth and eyes. The Republicans chose to because they wanted power, and their critique now is largely about power lost.

I spoke to Moore before Trump called for the “termination” of the Constitution but after he’d dined with two of America’s most virulent antisemites. I asked if that meeting had been a turning point for any Christian Trump supporters. It’s landing, he said, only with “people who already had concerns about Trump.” The born-again Trump critics are mostly just worried about whether he can get elected, which is one reason he still can.