There, there. Have a Negroni. This most delicious of bitter cocktails, the perfect elixir for a summer afternoon, turns 100 years old this year. You can raise your glass for a good cause, too: the end of June is Negroni Week, when bars and restaurants mix Negronis and Negroni variations for charity. By drinking a Negroni at a participating venue, you can raise money for organizations from Lambda Legal to the Colorado Water Trust, from the San Francisco-Marin Food Bank to United Cerebral Palsy. Has there ever been a more soothing way to raise money for a cause? I don’t think so, not unless I somehow missed Martinis for Puppy Dogs week.

Invented in 1919 by Count Camillo Negroni in Florence, Italy, the Negroni is actually a variation on another classic cocktail, the Americano. A mixture of Campari, sweet vermouth and soda water, served with a lemon slice, the Americano was originally known as the Milano-Torino, because of the origins of its two primary ingredients — Campari from Milan and Vermouth di Torino, from, well, you know. The name changed during Prohibition, when it became a favorite of Americans on vacation in Italy.

It was also a favorite of James Bond. The Americano, in fact, is the first cocktail ordered in Ian Fleming’s first 007 novel. The gentleman spy disdains the thought of drinking whiskey or vodka in a French cafe. On a sunny sidewalk, Fleming writes, “Bond always had the same thing — an Americano.”

It was 100 years ago that Count Negroni asked his bartender at the Cassoni Cafe on the Via de’ Tornabuoni to stiffen his Americano by replacing the soda with gin. History records that the bartender, one Fosco Scarselli, also replaced the lemon with an orange slice. Did he add the bitters as well? The legends do not tell.

Orson Welles sang the cocktail’s praises while he was making the film “Black Magic” in Rome in 1947. “The bitters are excellent for your liver,” he said, “the gin is bad for you. They balance each other.”

I like to mix them with a single jigger each of gin, Campari and sweet vermouth, a few shakes of bitters and an orange peel. A writer friend of mine flames the citrus peel, which is dramatic and makes the drink more aromatic, although I have never been able to do this without setting off the fire alarm.

Another key element, I believe, is to serve the cocktail with a single gigantic ice cube from an oversize ice cube tray. I got mine online. I regret nothing. 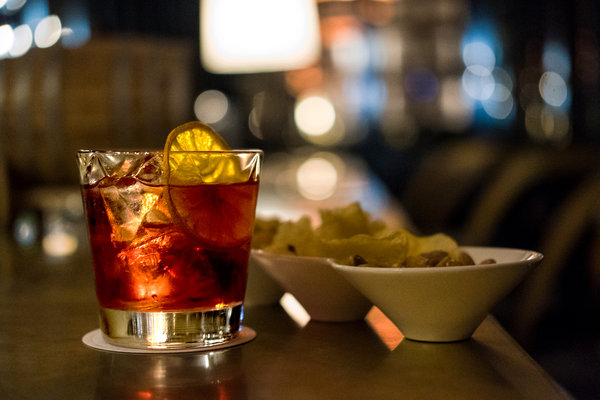 Each era creates its own signature cocktail, and sometimes the drinks that become popular during any particular decade can tell us something about the culture that produced them. In the 1930s, for instance, some drinks covered up the sketchy quality of the spirits during Prohibition. My favorite Depression-era drink is probably the French 75, so named because consuming some early versions of it allegedly felt like being shelled by a field gun called the Canon de 75 model 1897. In “Casablanca,” Yvonne and her Nazi date order French 75s at Rick’s Café. I’ll let someone else parse the significance of a Nazi ordering a drink named after a French artillery weapon, although Claude Rains, as Captain Renault, does note that Yvonne “may constitute an entire second front.”

In the 1950s and ’60s, drinks turned sweeter; the iconic cocktail of that era might be the brandy Alexander, a potent potable that we’ve bizarrely come to think of as feminine. Mary Richards drinks one in the pilot of “The Mary Tyler Moore Show”; years later, we see Peggy Olson drink one in Season 1 of “Mad Men.” (The writer Sarah Baird observes that by the penultimate episode of the series, Peggy is drinking Scotch just like her male counterparts, and it’s hard not to view this as progress.)

In the 1980s, I drank piña colada — because I could, I suppose; and in the 2000s I found my way to Cosmopolitans (thank you, “Sex and the City”) and mojitos. Those are sweet drinks, too, although they were a significant step up from the first drink I ever ordered at a bar: the, ahem, Kahlua Sombrero.

In the end, though, all cocktails aspire to the martini. It is hard to argue with Ogden Nash’s observation: “There is something about a Martini, / A tingle remarkably pleasant / A yellow, a mellow Martini / I wish I had one at present.”

Martinis make me crazy, though; I always want a second after I’ve had the first. But the second one is rarely a good idea. As James Thurber once said, “Two are too many, and three are not enough.”

And so I turn to the Negroni for solace on a summer afternoon. If you feel that the Aperol spritz is not a good drink — and the internet has been abuzz with this very question this spring — why not try a Negroni, especially now during Negroni Week? You will raise money for a cause and, who knows, perhaps discover something new.

Is it too bitter, you ask?

Given the age we now live in, with its fury and its noise, I feel it is exactly bitter enough.