President Trump wants $5.7 billion to build a wall at the southern border of the United States. Nancy Pelosi thinks a wall is “immoral.” The fight over these slats or barriers or bricks shut down the government for more than a month and may do so again if Mr. Trump isn’t satisfied with the way negotiations unfold over the next three weeks.

But let’s be clear: This is a disagreement about symbolism, not policy. Liberals object less to aggressive border security than to the wall’s xenophobic imagery, while the administration openly revels in its political incorrectness. And when this particular episode is over, we’ll still have been fighting about the wrong thing. It’s true that immigrants will keep trying to cross into the United States and that global migration will almost certainly increase in the coming years as climate change makes parts of the planet uninhabitable. But technology and globalization are complicating the idea of what a border is and where it stands.

Not long from now, it won’t make sense to think of the border as a line, a wall or even any kind of imposing vertical structure. Tearing down, or refusing to fund, border walls won’t get anyone very far in the broader pursuit of global justice. The borders of the future won’t be as easy to spot, build or demolish as the wall that Mr. Trump is proposing. That’s because they aren’t just going up around countries — they’re going up around us. And they’re taking away our freedom.

In “The Jungle,” a play about a refugee camp in Calais, France, a Kurdish smuggler named Ali explains that his profession is not responsible for the large numbers of migrants making the dangerous journeys to Europe by sea. “Once, I was the only way a man could ever dream of arriving on your shore,” the smuggler says. But today, migrants can plan out the journeys using their phones. “It is not about this border. It’s the border in here,” Ali says, pointing to his head — “and that is gone, now.”

President Trump is obsessed with his border wall because technology has freed us from the walls in our heads.

For people with means and passports, it’s easy to plot exotic itineraries in a flash and book flights with just a glance at a screen. Social feeds are an endless stream of old faces in new places: a carefree colleague feeding elephants in Thailand; a smug college classmate on a “babymoon” in Tahiti; that awful ex hanging off a cliff in Switzerland; a friend’s parents enjoying retirement in New Zealand.

Likewise, a young person in Sana, Yemen, or Guatemala City might see a sister in Toronto, a neighbor in Phoenix, an aunt in London or a teacher in Berlin, and think that he, too, could start anew. Foreign places are real. Another country is possible.

If you zoom out enough in Google Earth, you’ll see the lines between nations begin to disappear. Eventually, you’ll be left staring at a unified blue planet. You might even experience a hint of what astronauts have called the “overview effect”: the sense that we are all on “Spaceship Earth,” together. “From space I saw Earth — indescribably beautiful with the scars of national boundaries gone,” recalled Muhammed Faris, a Syrian astronaut, after his 1987 mission to space. In 2012, Mr. Faris fled war-torn Syria for Turkey.

One’s freedom of movement used to be largely determined by one’s citizenship, national origin and finances. That’s still the case — but increasingly, people are being categorized not just by the color of their passports or their ability to pay for tickets but also by where they’ve been and what they’ve said in the past.

This is what is happening on that front already:

A 2017 executive order barred people from seven countries, including five with Muslim majorities, from entering the country. An older rule put in place during the Obama administration compelled anyone who’d even just visited seven blacklisted nations to obtain additional clearance before traveling to the United States. Even as the Trump administration’s policy has met with legal challenges, it means that the barrier to entering the United States, for many, begins with their data and passport stamps, and is thousands of miles away from this country.

The Trump administration would also like to make it harder for immigrants who’ve received public assistance to obtain citizenship or permanent residence by redefining what it means to be a “public charge.” If the administration succeeds, it will have moved the border into immigrants’ living rooms, schools  and hospital beds.

The walls of the future go beyond one administration’s policies, though. They are growing up all around us, being built by global technology companies that allow for constant surveillance, data harvesting and the alarming collection of biometric information. In 2017, the United States announced it would be storing the social media profiles of immigrants in their permanent file, ostensibly to prevent Twitter-happy terrorists from slipping in. For years, Customs and Border Protection agents have asked travelers about their social media, too.

The Electronic Frontier Foundation has said these practices can “chill and deter the free speech and association of immigrants to the United States, as well as the U.S. persons who communicate with them.” In other words, it’s no longer enough to have been born in the right place, at the right time, to the right parents. The trail of bread crumbs you leave could limit your movements.

It’s possible to get a glimpse of where a digital border might lead from China. Look at its continuing experiment with social-credit scoring, where a slip of the tongue or an unpaid debt could one day jeopardize someone’s ability to board a train or apply for a job. When your keystrokes and text messages become embedded in your legal identity, you create a wall around yourself without meaning to.

The Berkeley political theorist Wendy Brown diagnoses the tendency to throw up walls as a classic symptom of a nation-state’s looming impotence in the face of globalization — the flashy sports car of what she calls a “waning sovereignty.” In a recent interview for The Nation, Professor Brown told me that walls fulfill a desire for greater sovereign control in times when the concept of “bounded territory itself is in crisis.” They are signifiers of a “loss of a national ‘we’ and national control — all the things we’ve seen erupt in a huge way.”

Walls are a response to deep existential anxiety, and even if the walls come down, or fail to be built in brick and stone, the world will guarantee us little in the way of freedom, fairness or equality. It makes more sense to think of modern borders as overlapping and concentric circles that change size, shape and texture depending on who — or what — is trying to pass through.

It’s far too easy to imagine a situation where our freedom of movement still depends entirely on what has happened to us in the past and what kind of information we’re willing to give up in return. Consider the expedited screening process of the Global Entry Program for traveling to the United States. It’s a shortcut — reserved for people who can get it — that doesn’t do away with borders. It just makes them easier to cross, and therefore less visible.

That serves the modern nation-state very well. Because in the end, what are borders supposed to protect us from? The answer used to be other states, empires or sovereigns. But today, relatively few land borders exist to physically fend off a neighboring power, and countries even cooperate to police the borders they share. Modern borders exist to control something else: the movement of people. They control us.

Those are the walls we should be fighting over. 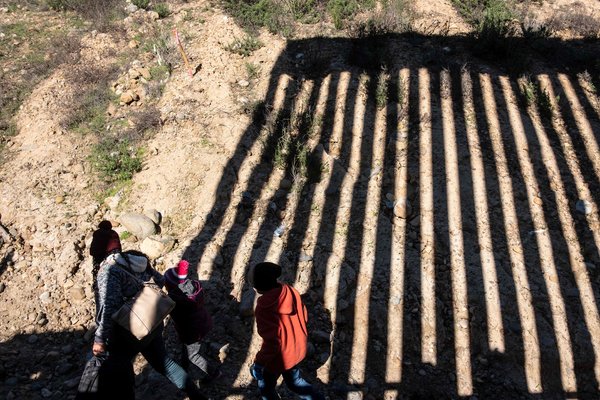 Atossa Araxia Abrahamian (@atossaaraxia) is the author of “The Cosmopolites: The Coming of the Global Citizen” and an editor at The Nation.