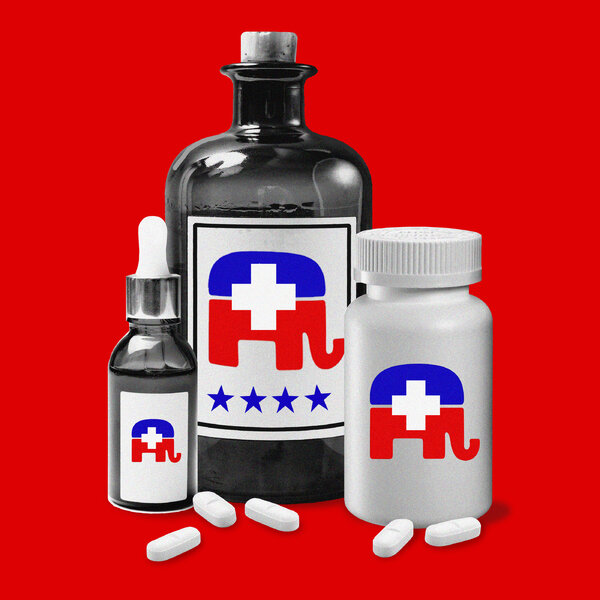 You don’t hear much these days about “economic anxiety.” Most observers acknowledge that the rise of the Trumpist right was driven by racial and social antagonism, not economic populism.

Yet there is an economic element to political extremism, just not what you’d think. Right-wing extremists, and to some extent even more mainstream conservative media, rely on financial support from companies selling nutritional supplements and miracle cures — and that financial support is arguably a significant factor pushing the right to become more extreme. Indeed, right-wing extremism isn’t just an ideological movement that happens to get a lot of money from sellers of snake oil; some of its extremism can probably be seen not as a reflection of deep conviction, but as a way of promoting snake oil.

Consider where we are right now in the fight against Covid-19. A few months ago it seemed likely that the development of effective vaccines would soon bring the pandemic to an end. Instead, it goes on, with hospitalizations closing in on their peak from last winter. This is partly due to the emergence of the highly contagious Delta variant, but it also crucially reflects the refusal of many Americans to take the vaccines.

And much of this refusal is political. True, many people who are refusing to get vaccinated aren’t Trumpists, but there’s a strong negative correlation between Donald Trump’s share of a county’s vote and vaccinations. As of July, 86 percent of self-identified Democrats said they had had a vaccine shot, but only 54 percent of Republicans did.

But vaccine refusers aren’t just rejecting lifesaving vaccines, they’re also turning to life-threatening alternatives. We’re seeing a surge in sales of — and poisoning by — ivermectin, which is usually used to deworm livestock but has recently been touted on social media and Fox News as a Covid cure.

OK, I didn’t see that coming. But I should have. As the historian Rick Perlstein has pointed out, there’s a long association between peddlers of quack medicine and right-wing extremists. They cater to more or less the same audience.

Once you’re sensitized to the link between snake oil and right-wing politics, you realize that it’s pervasive.

This is clearly true in the right’s fever swamps. Alex Jones of Infowars has built a following by pushing conspiracy theories, but he makes money by selling nutritional supplements.

It’s also true, however, for more mainstream, establishment parts of the right. For example, Ben Shapiro, considered an intellectual on the right, hawks supplements.

Look at who advertises on Tucker Carlson’s Fox News show. After Fox itself, the top advertisers are My Pillow, then three supplement companies.

Snake oil peddlers, clearly, find consumers of right-wing news and punditry a valuable market for their wares. So it shouldn’t be surprising to find many right-leaning Americans ready to see vaccination as a liberal plot and turn to dubious alternatives — although, again, I didn’t see livestock dewormer coming.

The interesting question, however, is to what extent the connection between right-wing politics and snake oil marketing has shaped the political landscape.

Put it this way: There are big financial rewards to extremism, because extreme politics sells patent medicine, and patent medicine is highly profitable. (In 2014 Alex Jones’s operations were bringing in more than $20 million a year in revenue, mainly from supplement sales.) Do these financial rewards induce pundits to be more extreme? It would be surprising if they didn’t — as conservative economists say, incentives matter.

The extremism of media figures radicalizes their audience, giving politicians an incentive to become more extreme.

So you can see how vaccination became such a flash point. Getting shots in arms is a priority for a Democratic president, which automatically generates intense hostility among people who want to see Joe Biden fail. And such people were already primed to reject medical expertise and believe in quack cures.

Surely everyone on the right noticed that even Donald Trump got booed recently when he told attendees at a rally that they should get vaccinated. He probably won’t say that again, and would-be future Trumps definitely won’t.

None of this would be happening if there weren’t a climate of anger and distrust for unscrupulous pundits and politicians to exploit. But the fact that extremism sells patent medicine creates a financial incentive to get more extreme.

You could say that if American democracy is in danger, that’s partly because sellers of snake oil — not bad policy ideas, but actual bad medicine — have been pulling off this one weird trick.