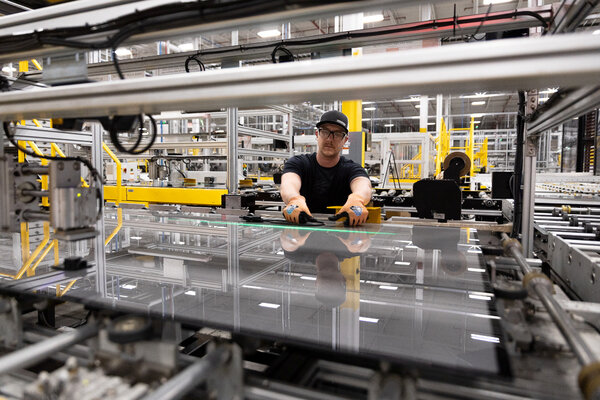 Remember the Trump trade wars? Actually, many of the tariffs Donald Trump imposed are still in place — less, I suspect, because Joe Biden thinks they were justified than because giving Republicans an excuse to accuse his administration of being soft on China doesn’t seem like a good idea. But in any case, trade issues are currently being overshadowed by everything from inflation to the war in Ukraine.

Under the radar, however, some of what Trump wanted but failed to achieve — a return of manufacturing to the United States, for instance — may actually be happening under his successor. A recent Bloomberg review of C.E.O. business presentations finds a huge surge in buzzwords like onshoring, reshoring and nearshoring, all indicators of plans to produce in the United States (or possibly nearby countries) rather than in Asia.

There has also been a flurry of news reports, backed by some flaky data, suggesting that companies really are building new manufacturing facilities in the United States and other high-income countries.

So we may be seeing early indications of a partial retreat from globalization. This isn’t necessarily a good thing, but that’s a topic for another day. For now, let’s talk about why this may be happening.

The first thing you need to know is that if we see some decline in world trade in the years ahead, it won’t be the first time that’s happened. It’s common to assume that the world is always getting smaller, that rising international interdependence is an ineluctable trend. But history says otherwise.

In fact, the world economy was surprisingly integrated on the eve of World War I. In “The Economic Consequences of the Peace,” John Maynard Keynes wrote of the “extraordinary episode” that he claimed ended in August 1914 — an era in which “the inhabitant of London could order by telephone, sipping his morning tea in bed, the various products of the whole earth, in such quantity as he might see fit, and reasonably expect their early delivery upon his doorstep.”

And that first age of globalization did in fact go into reverse after the Great War. Here are estimates of total world trade — exports plus imports — as a percentage of gross domestic product for selected years since 1913:

There was a big decline in trade between the start of World War I and the aftermath of World War II. Recovery took a long time: As late as 1980, trade was hardly larger, relative to the world economy, than it had been at the end of the Edwardian era.

What followed, however, was indeed an unprecedented jump in trade, sometimes referred to as “hyperglobalization.” This was the era described in my colleague Tom Friedman’s famous book “The World Is Flat,” first published in 2005; many people expected surging trade to continue indefinitely.

In fact, however, hyperglobalization stalled out around 2008; international trade as a share of the world economy has been more or less, um, flat for 14 years. And there are three reasons to believe that globalization will actually retreat in the years ahead, though probably not to the extent it did in the interwar years.

The first, most benign reason is the rise of the robots — by which I mean labor-saving technology in general. People often assume that improvements in transportation technology necessarily mean more trade. But that’s only true if progress in transportation is faster than progress in the technology of production. I wrote a little model about this a few years back, but here’s a reductio ad absurdum: Imagine that we all had access to the replicators on “Star Trek” — machines that would synthesize anything you wanted on the spot. If all you had to do was say “Tea, Earl Grey, hot” and a steaming cup materialized, you wouldn’t need to import the stuff from Sri Lanka.

Indeed, companies talking about reshoring production often make the point that modern techniques in some cases allow them to produce with relatively few workers, in which case the cost savings from outsourcing to low-wage countries are minimal — and are outweighed by the logistical advantages of producing close to home.

A second, less benign reason for declining globalization is the growing realization that the world is a dangerous place. It’s especially dangerous to allow yourself to rely economically on countries with authoritarian regimes, which may suddenly cut you off either as a power play or simply because dictators tend to behave erratically. Europe is now realizing that becoming dependent on Russian natural gas was a terrible mistake. China hasn’t engaged in economic blackmail — not yet, anyway — but both the Russian example and the arbitrariness of Xi Jinping’s Covid lockdowns have made businesses newly nervous about relying on Chinese suppliers.

Incidentally, the General Agreement on Tariffs and Trade — the foundational document for the modern world trading system — explicitly gives each nation the right to take “any action which it considers necessary for the protection of its essential security interests.” This right has sometimes been abused — Trump, absurdly, invoked national security to impose tariffs on Canadian aluminum — but given recent events, it’s hard to deny the case for policies like the recently enacted CHIPS and Science Act subsidizing U.S. production of semiconductors.

Finally, let’s admit it: Now that America is finally doing something about climate change, some of the policies it’s introducing will, in practice, be at least mildly protectionist. Notably, the new tax credit for purchases of electric vehicles will apply only to vehicles assembled in North America.

Why do this? Politics — politics in a good cause, I’d say, but politics nonetheless. Getting climate action was a heavy political lift; some of us are still rubbing our eyes over the fact that it actually happened. But to sell it, Democrats had to be able to portray it as a program that would create jobs, which meant including Buy American clauses.

Do these clauses violate existing trade agreements? Possibly. But let’s face it: Honoring the letter of trade agreements is less important than saving the planet. If this is what tackling carbon emissions required, so be it.

But coming back to my original theme: It does seem likely that we’re about to see some retreat from globalization.

The state of the trade war.

Fears of mass outsourcing of service jobs — but not so far.

The decade of the battery?