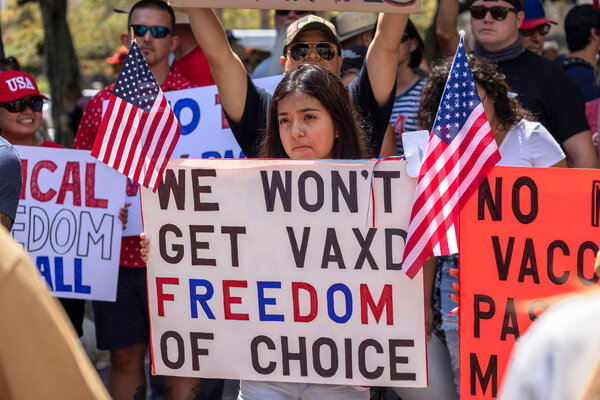 Ms. Haelle is a science journalist who covers vaccine hesitancy and the anti-vaccine movement. She is the author of “Vaccination Investigation: The History and Science of Vaccines.”

As the coronavirus began pushing the nation into lockdown in March 2020, Joshua Coleman, an anti-vaccine campaigner who organizes anti-vaccine rallies, went on Facebook Live to give his followers a rallying speech. He laid out what he thought the pandemic really was: an opportunity.

“This is the one time in human history where every single human being across this country, possibly across the planet, but especially in this country, are all going to have an interest in vaccination and vaccines,” he said. “So it’s time for us to educate.”

By “educate,” he meant to spread misinformation about vaccines.

The approach that Mr. Coleman displayed in his nearly 10-minute-long appearance — turning any negative event into a marketing opportunity — is characteristic of anti-vaccine activists. Their versatility and ability to read and assimilate the language and culture of different social groups have been key to their success. But Mr. Coleman’s speech also encapsulated a yearslong campaign during which the anti-vaccine movement has maneuvered itself to exploit what Mr. Coleman called “a very unique position in this moment in time.”

Over the last six years, anti-vaccine groups and leaders have begun to organize politically at a level like never before. They’ve founded state political action committees, formed coalitions with other constituencies, and built a vast network that is now the foundation of vaccination opposition by conservative groups and legislators across the country. They have taken common-sense concepts — that parents should be able to raise their children as they see fit, and that medical decisions should be autonomous and private — and warped them in ways that have set back decades of public health advances.

The power of anti-vaccine mobilization is particularly evident now in efforts to protect Americans against Covid-19. Only about 61 percent of eligible Americans are fully vaccinated — not enough to provide national protection — even though the vaccines are free and are the best tool for keeping people out of overcrowded hospitals. But those who are baffled by the outsize influence of the anti-vaccine movement must understand how carefully its leaders have navigated their way to this point.

Vaccine hesitancy has existed in some form since the development of the first vaccine over 200 years ago. But the 2014-2015 measles outbreak, which began among mostly unvaccinated visitors at Disneyland in California and led to more than 125 cases, woke up the nation to the threat of that hesitancy. The only reason measles had gained a foothold was that pockets of the country with low vaccination rates had led to the erosion of herd immunity in those places.

In years leading up to that outbreak, vaccines had not been a partisan issue in the United States. But something was changing. Politicians like Chris Christie and Rand Paul called for respecting parents’ choice to vaccinate their children or not (although Mr. Christie later backpedaled a bit).