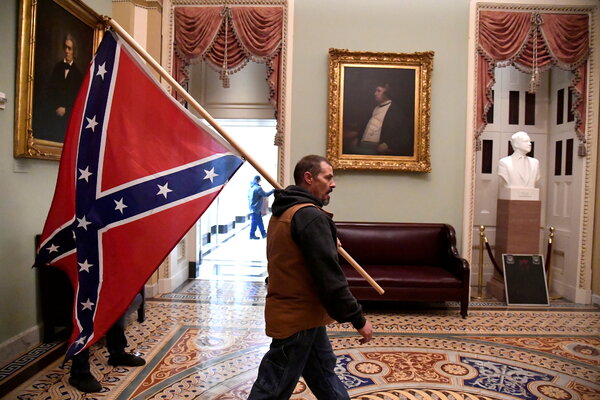 Since the presidential election was called for Joe Biden on Nov. 7, President Trump has cultivated the myth that the election was stolen. Despite his claims of voter fraud and election mismanagement after dozens of courtroom losses, it’s become clear over the past few months that there is no real legal basis for contesting the election results.

But myths are often invulnerable to reality. As the “Stop the Steal” mantra spread from the White House to the mouths of conservative members of Congress and the halls of Republican-controlled state houses, and throughout conservative social media, something insidious and predictable happened: Senators such as Ted Cruz and Josh Hawley announced they would object to the results of the election on Jan. 6 because so many Americans doubted the validity of its outcome. The myth became the basis for contesting the facts.

A myth becomes reality through ritual, when its story is dramatized and its adherents brought to collective participation in it. When Trump supporters took hold of the Capitol, temporarily halting the counting of the Electoral College votes, they brought the fiction down upon the levers of government through temporary mob rule.

It is tempting to think of this insurrection as akin to Pearl Harbor or Sept. 11, but doing so places an act of domestic terrorism in the historical lineage of attacks from external actors. If we are going to reckon with the import and legacy of Jan. 6, we must look inward.

After the Civil War, Reconstruction saw the passage of the 13th, 14th and 15th Amendments, which abolished slavery and granted equal citizenship to Black Americans. In the years after the war, the nation witnessed Black Americans’ integration into Southern political life. Local chapters of the Union League and other organizations mobilized Black voters and fostered Black candidates for local and state elections. In 1868 South Carolina had a Black-majority state legislature; in 1870 Hiram Revels of Mississippi became the first Black American to serve in the United States Senate. For a short while, it seemed that liberty and justice for all was an attainable legal goal.

However, in the late 1860s and early 1870s, white Southerners developed the notion of the Confederacy as the Lost Cause in order to combat the radical changes taking root in Dixie. The Lost Cause is sometimes referred to as revisionist history, but I would call it something else: collective memory in the form of Confederate civil religion.

According to proponents of the Lost Cause, the South was the victim of an invasion by “Yankee vandals,” as Caroline Janney, a University of Virginia historian, phrases it. In response, they framed themselves as occupying the moral high ground in the conflict — a class of honorable and loyal families who defended their soil and way of life in the face of undue Northern aggression. To make their case, they had to argue that slavery was not the real issue of the war, but rather a pretext for a political and economic power grab.

Like the myth of the stolen election, these claims are historically untenable. But the historical realities are less important to the myth than the narrative, rituals and symbols that developed in conjunction with the Lost Cause.

As Charles Reagan Wilson, a Southern historian, has shown, Lost Cause mythology was enacted through the rituals of Confederate civil religion: the funerals of Confederate soldiers, the celebration of Confederate Memorial Day, the pilgrimages made to the hundreds of Confederate monuments that had been erected by the dawn of World War I. The rituals and symbols instilled in the younger generation the nobility of the Confederacy and the moral vacancy of its enemies. Together, they supported a religious myth that for many Southerners supplanted the historical record. The men who died in battle became its martyrs. The generals became its patron saints.

The civil components of the Lost Cause were combined with Christian mythology. The South played the part of Christ in the Christian drama — crucified, yet unrisen. The saints in this Lost Cause theology were the heroes of the Confederacy — most notably Robert E. Lee and Stonewall Jackson. A scholar of Southern religion, Paul Harvey, put it this way: “Key to this mythology was the exalting of southern war heroes as Christian evangelical gentlemen. Evangelists of the New South era immortalized the Christian heroism of the Confederate leaders and soldiers and dovetailed them into revivals of the era.” No matter one’s denominational affiliation, it offered a story and a set of high holy days every white Southerner could celebrate.

The Lost Cause is an example of how collective memory works. Collective memory is not concerned with historical accuracy; its preoccupation with the past is based on a desire to mobilize a vision for the present and create a prospect for the future. Heather Cox Richardson argues persuasively in her recent book “How the South Won the Civil War” that even though the Union defeated the Confederacy on the battlefield, the South won the war by creating a Southern identity that led to the emergence and re-emergence of the Ku Klux Klan and the institution of Jim Crow laws, and then spread west to provide fuel for the Chinese Exclusion Act and acts of violence against Native Americans — all on the basis of resentment, myth and symbol, rather than facts or truth.

Make America Great Again is a politics of grievance complete with its own myths and symbols. Mr. Trump’s rallies have been the ritual locus of his brand of nationalism. They create a collective effervescence in attendees that leaves them seething at their political enemies and ready to follow the president down any authoritarian road he takes them. Moreover, Andrew Whitehead and Samuel Perry have shown that Mr. Trump’s religious support comes from Christian nationalists who believe the United States was built for and by white Christians.

Like the Lost Cause, MAGAism is buttressed by religious narratives and imagery, and its gospel is spread through houses of worship every Sunday. For some evangelicals, Mr. Trump is a divinely ordained savior uniquely able to save the nation from ruin at the hands of godless socialists, Black Lives Matter activists and antifa. So it’s no surprise that as insurrectionists stormed the Capitol, they waved a mix of Confederate, Christian and Trump flags.

MAGAism also has an eschatology based on conspiracy. As Marc-André Argentino, who studies QAnon, told me by email, for many Trump supporters, including growing numbers of white evangelicals, Jan. 6 figures as “the start of the long awaited period of tribulation that will announce the arrival of the promised golden age.” In other words, Jan. 6 is both a beginning point and a sign of the end, a rebirth for the dangerous delusions of extremists who see violence as an appropriate means for finishing what they started in order to usher in a new world.

The lasting legacy of the Jan. 6 insurrection is the myth and symbol of Mr. Trump’s lost cause. He has successfully nurtured a feeling in the 74 million Americans who voted for him that they can trust neither their government nor the electoral process. By encouraging them to question the validity of votes in some of the Blackest cities in the country, such as Detroit, and stoking anger that such constituencies would have the power to swing an election, he convinced them that the process is rigged, thus giving his supporters the moral high ground. This creates the foundation for a collective memory based on a separate national identity held together by the tragic stealing of his presidency and the evil of his opponents.

The Lost Cause provides a blueprint for winning the war, even though Mr. Trump has lost this election. After Mr. Biden’s inauguration, if prominent Republican figures encourage their followers to accept the results, but not defeat; if they pick up Mr. Trump’s leadership mantle by fostering resentment and the desire for revenge through their Twitter feeds; if they perpetually call into question the legitimacy of the U.S. government through an army of evangelical pastors less concerned with reality than with disseminating the myths and symbols of Make America Great Again as a vehicle for Christian nationalism, it’s not hard to see how they will become heirs of the Lost Cause. That should frighten us all.

Bradley Onishi (@BradleyOnishi) is a professor of religious studies at Skidmore College and the creator, producer and writer of the podcast “The Orange Wave: A History of the Religious Right Since 1960.”