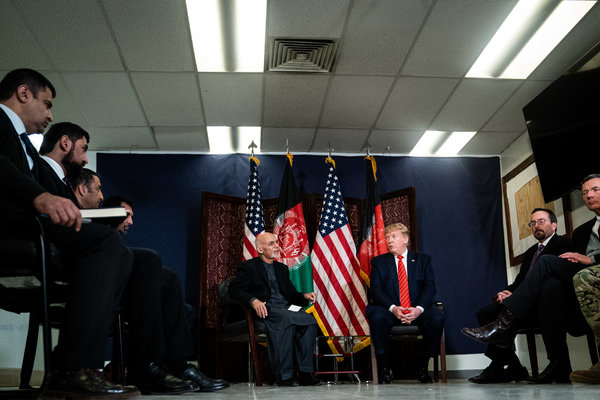 Re “Trump Remark About Taliban Stirs Confusion” (front page, Nov. 30), about the president’s declaration that he had reopened peace negotiations with the Taliban:

There is nothing new about President Trump’s penchant to sow confusion wherever he treads. His policies are not the result of deep or long-sustained thinking, but rather the instant reaction to a whim, or to a Sean Hannity professed desire. Often the superficial thought leads to a poor move. Consequently, he and his staff frequently walk it back and say he didn’t say what everyone heard.

Unfortunately his quickness to act without listening to professionals and his lack of the intellectual patience of sustained thinking lead to uncertainty about what the United States plans to do and unsuccessful policy.

“Trump Remark About Taliban Stirs Confusion” is determined to paint a potentially constructive gesture on the part of the president as a flip-flop that has sent the diplomatic corps into a tailspin. It is hard to see pieces like this as fair and balanced.

If President Obama had reversed policy in favor of diplomacy over war, we would have all applauded. The conflict in Afghanistan has been going on for 18-plus years, America’s longest war. If this president can end it, good for him. The difference between the left and the right really comes down to this: We on the left concede some points to them; they never concede points to us. If we attack on everything, we lose the high ground.

Shopping and Working on the Holiday

Can’t Americans go even one day without shopping? Is it really necessary to have any number of retail stores open every day of the year?

Consumerism is becoming an addiction; let’s restrain ourselves, folks, please.

I worked in broadcast news for 30 years, mostly weekends and holidays. What’s the big deal? I didn’t feel a sting at all, and I got overtime on holidays.

What I didn’t get was an article on the front page of the business section written about me and my compadres, nor did we merit one.