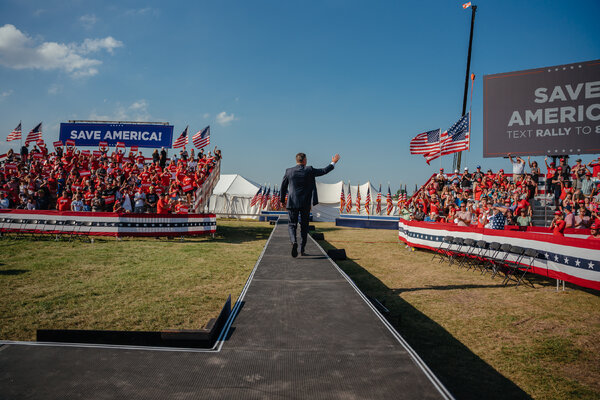 On Wednesday, President Biden gave a second speech on the threat to democracy. It was a little less dramatic than his Philadelphia speech on the same subject, and it was more focused as well. He spent his time on the threat, rather than touch on his infrastructure bill or speak to economic growth under his administration.

Biden went on to ask Americans to “meet this moment of national and generational importance” and “decide whether we will have fair and free elections and every vote counts.”

Most political commentators had little to say about the speech; the response, by and large, was indifference. But some observers said it was counterproductive. By making the election a choice between a Democratic Party that will secure American democracy and a Republican Party that may unravel it, the argument goes, Democrats are essentially telling voters that their democracy is already lost.

The political commentator Josh Barro made this exact case in a recent newsletter.

When Democrats talk about “democracy,” they’re talking about the importance of institutions that ensure the voters get a say among multiple choices and the one they most prefer gets to rule. But they are also saying voters do not get to do that in this election. The message is that there is only one party contesting this election that is committed to democracy — the Democrats — and therefore only one real choice available.

This, he concludes, “amounts to telling voters that they have already lost their democracy.”

This may or may not be politically effective. Let’s set that aside. The more interesting thing is whether it’s true, and the obvious answer is yes. The Democratic Party is, at this moment, the only viable political party with a serious commitment to free and fair elections. And in a country where power alternates between two major parties, this means American democracy is in real trouble.

What Barro says isn’t a gotcha; it is simply the truth of the matter. If you oppose the effort to nullify Democratic election victories and create systems of minority rule (the Republican running for governor of Wisconsin said, for example, that “Republicans will never lose another election in Wisconsin after I’m elected governor”), then there’s only one real choice on the ballot.

That fact gets to a broader issue with this and other similar criticism. Intentionally or not, they place all agency on Democratic politicians. If Democrats have made democracy a partisan issue with their rhetoric, then it stands to reason that if they changed their rhetoric, they might make the issue less partisan and thus broaden the reach of their message.

The problem, which should be obvious, is that Democrats did not make democracy a partisan issue. Republicans did. They did when they stood with Donald Trump in the wake of Jan. 6; they did when they embraced “Stop the steal” and election-denying candidates; they did when they made light of the threats against Nancy Pelosi and the assault on her husband.

It’s not Democrats who left the voting public with only one choice if they want to protect democracy as they know it. The reason the stakes are so high is that the Republican Party has made them this high.

My Friday column was on virtue (or the lack thereof) in American politics.

When politicians and other political leaders refuse to play this game — when they drop the pretense of virtue and embrace a politics of cruelty and malice, in which nothing matters but the will to power — voters act accordingly. Some may recoil, but just as many will embrace the chance to live vicariously through leaders who celebrate vice and hold virtue in contempt.

And in the most recent episode of my podcast with John Ganz, we discuss the film adaptation of “The Hunt for Red October.”

Joshua Zeitz on America in the 1850s for Politico.

Jerusalem Demsas on community input for The Atlantic.

Jaz Brisack on the labor movement for Dissent.

Nojang Khatami on Iranian struggle for democracy for The Boston Review.

Feedback If you’re enjoying what you’re reading, please consider recommending it to your friends. They can sign up here. If you want to share your thoughts on an item in this week’s newsletter or on the newsletter in general, please email me at [email protected] You can follow me on Twitter (@jbouie), Instagram and TikTok.

Photo of the Week

I was walking to Washington D.C’s Union Station for an early morning train home to Charlottesville, Va., and caught the bus depot in this wonderful, golden hour light. I like everything about this scene: The colors pop; the shadow cuts across the frame, emphasizing the leading lines; and there’s good balance to the image. I share lots of pictures here, obviously, but this is one of my better ones, I think.

I put “pumpkin” in scare quotes because I used two honeynut squash to make this pie, and even Clark calls for butternut squash and not pumpkin. Any similar gourd should work, I think. We don’t usually eat pumpkin pie (or anything similar) on Thanksgiving, but I made this on a lark and really enjoyed it. I followed the recipe as written over at NYT Cooking, but instead of a traditional pie crust, I made a graham cracker crust; I think the change was worth it.

Whatever you decide to do with the crust, this is a great pie. I served it to friends, and they were very impressed.

All-purpose flour, for rolling out the dough

Place two racks in the oven: one in the lower third and one in the upper third. Place a rimmed baking sheet on the lower oven rack and heat oven to 400 degrees.

Line another rimmed baking sheet with parchment paper and spread butternut squash on it. Drizzle squash with 2 tablespoons of the heavy cream, sprinkle with granulated sugar and dot the top with butter. Roast on the upper rack, stirring once or twice, until squash is very tender, 40 to 50 minutes.

Meanwhile, on a lightly floured surface, roll pie dough into a 12-inch circle. Transfer to a 9-inch metal pie pan. Fold over any excess dough, crimping the edges. Transfer to the freezer for at least 30 minutes and up to 24 hours. (This helps the crust hold its shape so the edges don’t slump.)

When the squash is soft, transfer the pan to a wire rack to cool for at least 10 minutes (and up to a few hours). Raise the oven temperature to 425 degrees.

In a food processor or blender, purée the squash with the remaining cream until smooth. Add eggs, brown sugar, spices, bourbon and salt, and pulse to combine. The mixture should be very smooth.

Pour mixture into the chilled pie shell. Carefully transfer pie to the hot baking sheet on the bottom rack. Bake for 10 minutes, then lower the oven temperature to 300 degrees and continue to bake until the crust is golden and the center jiggles just slightly when shaken, 35 to 45 minutes longer. Transfer pie to a wire cooling rack and allow to cool completely before serving. Pie can be baked up to 24 hours ahead of serving; do not refrigerate before serving.