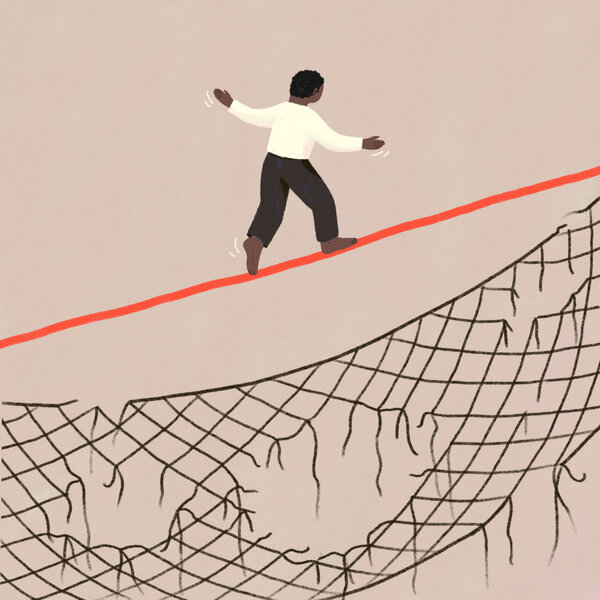 Ms. Covert is a journalist who focuses on the economy, with an emphasis on policies that affect workers and families.

The United States has an incredibly high child poverty rate.

Nearly one in seven children lives in a poor family. By comparison, fewer than 10 percent of adults are poor, and under 9 percent of those age 65 and over are. Child poverty also doesn’t fall evenly across demographics: 71 percent of poor children are Black, Hispanic or Native American.

But child poverty is not a problem without a solution. Americans may roll their eyes at being constantly compared unfavorably with Western European countries, but in this case we aren’t just bested by the usual suspects. The United States is a pretty extreme outlier. Out of 40 countries, America ranks 38th, behind not just Finland, Denmark, Germany and France but also Slovenia, Estonia, Russia and Mexico.

There’s a very simple reason for this: We don’t give parents enough money to raise their children. Or at least we didn’t until last year’s expanded child tax credit payments that proved we could if we wanted to.

Some have blamed single women choosing to have children out of wedlock and “the decay of the American family” for poverty, in the words of the former representative Michele Bachmann. But the shapes and sizes of our families can’t explain our high child poverty rate. “Across countries, child poverty rates are pretty similar in terms of the poverty that’s there before the government does anything,” Jane Waldfogel, a professor of social work at Columbia, told me. Even with the comparatively paltry wages low-income Americans earn, the country still has similar poverty levels to others just based on income alone, before the government offers families benefits.

That’s true for all kinds of families. In the 2000s, about 65 percent of American single mothers lived in poverty before the government stepped in, similar to rates in Canada and Germany and lower than in Britain. But once government benefits were taken into account, single mothers’ poverty rates dropped significantly in most countries but stayed highest in the United States, at over 50 percent.

“It’s not our family structure or our demographic mix or our high immigrant share or any of those things,” Dr. Waldfogel said. “If you look at what share of children would be in poverty if all they had was what their family brings in, we would be very comparable in our child poverty rate to Canada or France or England or any of our other peer countries.”

Others have argued that American poverty persists because government assistance makes Americans unwilling to work. As the former representative Paul Ryan put it, “There are nearly 100 programs at the federal level that are meant to help, but they have actually created a poverty trap.” But our high child poverty rate isn’t because poor people feel less incentivized to work or they’re just plain lazier in the United States. We manage to have both high employment levels and high poverty rates at the same time.

The real difference is that the United States does far less to reduce its child poverty rate than some of its foreign peers. “It’s no more complex than we spend less, and so poverty rates are higher among kids,” Hilary Hoynes, an economist at the University of California, Berkeley, told me.

There are a number of social programs that other countries offer that the United States doesn’t. We don’t have universal health care (although we do have the Children’s Health Insurance Program for low-income kids, as well as more expanded coverage through the Affordable Care Act). We also spend far less on child care and early childhood education.

But the most important distinction is that most other countries give parents more money when their children are young, many of them through direct child allowances. “The evidence is overwhelming that child allowances are the single most important policy for preventing child poverty,” said Irwin Garfinkel, an economist at Columbia. Giving parents cash goes an incredibly long way toward erasing poverty.

By contrast, we’ve spent significant resources over the past half-century on alleviating elderly poverty. Social Security is the greatest anti-poverty program we have in the United States. It kept 26.5 million people out of poverty in 2020, most of them seniors. Unemployment insurance, the safety net program that clocks in next, lifted 5.5 million people above the poverty line. We rarely talk about it this way, but Social Security is a form of direct cash payment to all Americans once they hit a certain age.

“It’s not rocket science,” Dr. Hoynes said. When it comes to how much we spend on the elderly, “we look pretty similar to other countries.” The United States simply spends less on a permanent safety net for children.

Failing to invest in children comes with concrete consequences, for both them and everyone else. When families have less income, they can’t afford as much food. It’s perhaps not surprising, then, that the United States has had a high rate of food insecurity among families with children. That’s particularly dangerous for children’s development. Hunger not only can lead to health problems later in life but has also been linked with behavioral issues and mental health problems. Better food access, on the other hand, is associated with higher educational attainment and better earnings in adulthood.

Recent robust research out of Columbia University has linked better resources in childhood to a long list of benefits, including fewer infant deaths, better health, less interaction with the criminal justice system, higher graduation rates, more work and higher income. Lacking enough resources in childhood, on the other hand, leads to “quite a profound level of insults in adulthood,” Dr. Hoynes said.

The Covid-19 pandemic has provided a natural experiment that allowed us to see what happens when the U.S. government spends significantly more resources on alleviating hardship, especially through direct payments, than it usually does. What we’ve found is that it works.

Families began receiving an expanded child tax credit last July, created by the American Rescue Plan, passed exclusively by Democrats and signed into law by President Biden. The existing credit was expanded for the first time to reach all poor families and offered them more money: up to $300 a month for every child under age 6 and $250 for older ones. More than 90 percent of American families were eligible. Payments went out monthly.

The immediate impact was stark. The results were “incredible,” Dr. Garfinkel said with a laugh. Child poverty dropped from 15.8 percent in June, before checks went out, to 11.9 percent in July. That means three million fewer children were living in poverty. The effects were even more significant for Black and Latino children, who saw their poverty rates drop by 3.8 and 6.1 percentage points, thanks to the credits, compared with 3 percentage points for white children. The drop in poverty can be directly explained by the payments: Fewer parents struggled to afford their expenses after they started receiving checks, even while more childless adults struggled to afford the basics.

With more money in their pockets, parents were better able to afford the food they needed to feed their families. Nearly half of people who got the payments spent the money on food, and 3.3 million more families had enough to eat. The decrease in food insecurity was “jaw dropping,” Dr. Garfinkel said.

We’ve since reverted to our norm. The child tax credit payments were scheduled to last only through the end of 2021, and a deal to extend them crashed and burned on the opposition of Senate Republicans and Senator Joe Manchin, Democrat of West Virginia, in part, reportedly, because he worried that parents would spend the money on drugs. (Publicly he said he opposed a package that included an extension because of its cost.) In January, the first month since last summer without the payments, child poverty increased to 17 percent (from 12.1 percent), the highest rate since the end of 2020, pushing 3.7 million more children into hardship.

Sending parents more money during a devastating pandemic was a sound way to keep them from free-falling into destitution. But it’s just as sound a policy when there’s no other emergency than our continuing high child poverty rate. With the one weird trick of sending cash payments to parents, we could join our peers in caring for the youngest among us. All that stands in the way is politics.

Bryce Covert (@brycecovert) is a journalist who focuses on the economy, with an emphasis on policies that affect workers and families.