In the summer of 2012, in the small town of San Zeno di Montagna in northern Italy, my grandfather welcomed a new addition to the family: One of his donkeys gave birth to a female foal, which he kept as a pet. Much to our amusement, he decided to call it Angela Spread. Angela, of course, was Angela Merkel, whose rigid approach to Europe’s fiscal crisis had become particularly infamous over the previous year. “Spread” referred to a somewhat obscure term in bond finance: the difference between the yields of Italian and German government bonds.

When asked about the little donkey’s peculiar name, he answered that it would help us all to laugh a little about Italy’s troubled economy and years of instability. “Lo spread” had become shorthand for everything that was wrong. The yield on a bond reflects how much interest a borrower — in this case, the government — has to pay to borrow money. Germany, with its booming economy, is considered an excellent credit risk. So its bond yields are very low. Italy, by comparison, is seen as an overspender, so its yields are much higher.

The difference is, in effect, encapsulated by that one number, “lo spread,” an object of respect and fear that tells us a lot about the messy state of European politics.

Silvio Berlusconi, Italy’s former prime minister, was the first supposed victim of lo spread. In 2011, the European Central Bank pressured him to reduce Italy’s deficit, but he refused to rein in spending. In November, the spread reached a high of 574 points, indicating that Italian bonds yielded 5.74 percentage points more than German bonds. The same month, Mr. Berlusconi resigned, making way for a technocratic government led by Mario Monti, an economist.

“Lo spread” soon took center stage not only in politics but also in everyday life. I saw it in graffiti condemning the European Central Bank. On a trip to the Dolomites, I heard it in casual conversations at the bar. “Lo spread” even made it to pop music, including a song called “Il ballo dello spread,” or “The Dance of the Spread.” The chorus says it all: “While lo spread goes up, up, up, Italian citizens go down, down, down.” You’re supposed to dance to it by mimicking the oscillations of the spread.

These various attempts to desacralize “lo spread,” to make fun of it and demystify it, served partly to make sense of its sudden and inescapable presence on the scene of Italian politics and partly to blame Mr. Berlusconi’s government for getting us there in the first place. 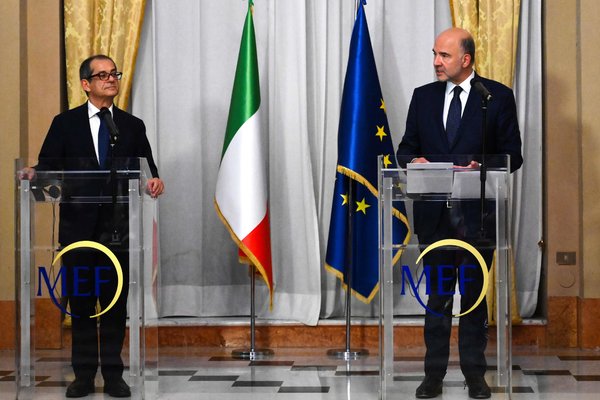 The spread reigned sovereign. It was constantly scrutinized and regularly on the front page of Italian newspapers. The government approved or rejected policies depending on its movements. Lo spread seemed to have the final word on Italy’s future.

In 2013, when Italy’s economic situation began to stabilize, the phantom of the spread retreated.

It reappeared in March, when a new coalition government came to power — one elected on an anti-austerity, euroskeptic agenda. The gap between Italian and German bond yields again started to grow, and with it, the spread made its reappearance in the headlines.

Last month, the European Commission, for the first time in its history, rejected the Italian government’s budget, primarily because proposed spending on tax cuts, pension benefits and unemployment relief caused Italy to exceed E.U. debt guidelines. The E.U. has threatened to fine Italy, but the government has announced that it will not back down. The tensions caused the spread to reach its highest levels in nearly five years.

But something changed. “Lo spread” does not seem to command the same devotion it once did. The government dismisses it by either ridiculing or demonizing it. Luigi Di Maio, leader of the Five Star Movement and a deputy prime minister, claimed that its rise is a result of manipulation by opposition parties, while others have blamed an international conspiracy orchestrated by global finance and European technocrats. Matteo Salvini, leader of the League political party and the other deputy prime minister, quipped that “lo spread” is best eaten with bread over breakfast.

In other words, Italy’s leaders have discovered what so many Italians realized long ago: Mockery is a powerful tool, particularly when applied to the European Union’s rigid rules. Apocalyptic predictions about what would happen if “lo spread” became too large have not come to pass, at least for now. The government no longer accepts an abstract bond finance term as the unappealable judge of Italian politics, and there is a widespread sense that it is time to challenge not just the commission’s fiscal rules but also the E.U. in general.

Instead of a symbol of Italy’s weakness relative to Germany and the rest of Europe, “lo spread” has become a symbol of all that is frustrating about the E.U.

My grandpa figured this out a while ago. When Angela Spread was fully grown, he sold her.

Lucia Rubinelli is a research fellow in the history of political thought at Robinson College, University of Cambridge.