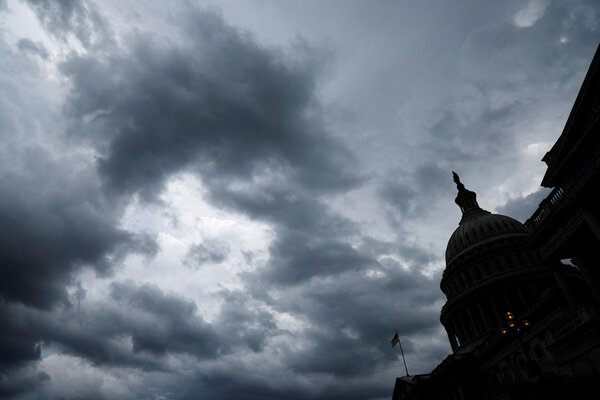 Richard Ringer, a 69-year-old Democratic state House candidate in Pennsylvania, is an early riser, and on Monday he was up before 5 a.m. when he heard someone at his garage door. He looked out the window, saw a man with a flashlight, and assumed it was the same person who had twice vandalized his house in the past month.

Just a couple of weeks earlier, Ringer says, he found a message spray-painted on his garage door; though the rain partly rinsed it off, the words “Your Race” and “Dead” were visible. Then, last Thursday night, he says he came home to a brick thrown through his window.

So when Ringer saw the intruder on Monday, he says, he ran outside and tackled him. But the man was quickly able to pin Ringer down, and beat him unconscious. Ringer doesn’t know for certain that the violence was political — the police are investigating — but given the graffiti, and the fact that his neighborhood in Fayette County, in southwestern Pennsylvania, is usually quiet and safe, he suspects it was. “I’m not really surprised that this is happening locally, and is happening to me, just because of what has been going on and the enthusiasm for Trump around here,” he told me.

Ringer’s assault made the local news, but hasn’t been much of a story nationally. Perhaps that’s because it’s just a small detail in a growing tapestry of menace. All over this febrile country, intimations of mayhem are gathering. Vigilantes in Arizona, some armed and wearing tactical gear, have harassed and intimidated voters at the sites of ballot drop boxes, cheered on by Mark Finchem, the Republican candidate for secretary of state. In Nevada, where a millionaire far-right Republican official named Robert Beadles has systemically targeted election workers, Reuters reported that the top election officials in 10 of the state's 17 counties have resigned, retired or declined to run again.

And, most notably, a MAGA fanatic named David DePape broke into Speaker Nancy Pelosi’s home and assaulted her 82-year-old husband with a hammer, leaving him unconscious in a pool of his own blood. More shocking than the attack itself has been the response to it from the Trumpist wing of the Republican Party. Some officials spread lurid lies that Pelosi was attacked by a gay lover. Others jeered about it. “Nancy Pelosi, well, she’s got protection when she’s in D.C. — apparently her house doesn’t have a lot of protection,” Kari Lake, Arizona’s Republican candidate for governor, said to laughter at a campaign event. Donald Trump Jr. retweeted a photo of underwear and a hammer with the caption, “Got my Paul Pelosi Halloween costume ready.”

It’s hard to feel sanguine about a society whose political class cannot muster the solidarity to universally condemn the terroristic bludgeoning of an old man. It’s why Joe Biden’s speech on Wednesday night, in which he spoke about the attack on Pelosi and the role that Trump’s big lie is playing in the midterms, was at once so necessary and so unpromising. He was trying to appeal to a patriotic consensus about democracy that simply no longer exists.

Biden wasn’t warning that America might spiral into either autocracy or low-level civil war. He was trying to offer hope that it might not. The very fact that he had to insist there’s an alternative to disunion and chaos is a sign of how bad things have gotten.

Political violence is not exclusively perpetrated by conservatives. The recent beating in Florida of a Marco Rubio canvasser — a man who turned out to have ties to white supremacists — appears to have been motivated by anti-Republican animus. But, as my colleagues on the editorial board wrote on Thursday, the right is far more violent than the left, and Republicans wink at assaults committed by extremists in a way that Democrats do not.

The message of all the chuckling about Paul Pelosi is clear: The right believes its enemies have no rights, and no longer sees the need to pretend otherwise. Donald Trump taught the Republican Party that it needn’t bother with hypocritical displays of decency, that it can revel in cruelty, transgression and the thrill of violence. Now it’s taking that lesson into the first post-Jan. 6 election. The tense calm of the last 20 months has often felt like being in the eye of a hurricane. Now the terrible weather is coming back.

In a widely cited essay, the centrist pundit Josh Barro criticized Biden’s speech because it implied that voters concerned about democracy must vote for Democrats whatever their policy preferences. “The message is that there is only one party contesting this election that is committed to democracy — the Democrats — and therefore only one real choice available,” he wrote, adding, “This amounts to telling voters that they have already lost their democracy.” I find this argument bizarre. It is simply a fact that only one party tried to overturn the 2020 election, and only one party is trying to insulate itself from the will of voters in future elections. As the Wisconsin Republican candidate Tim Michels put it recently, “Republicans will never lose another election in Wisconsin after I’m elected governor.”

It may be that Biden’s efforts to alert the country about what’s coming are doomed. In a recent CBS poll, 56 percent of likely voters said they believe that if Republicans win in the midterms, they will try to overturn Democratic election victories. The same poll showed that, if the election were held today, 47 percent plan to vote for Republicans, and only 45 percent for Democrats. Those who prioritize the preservation of democracy in America are probably already Democratic voters. Still, Biden had an obligation to try to focus our attention on a mounting threat.

Though Republicans are likely to do well on Tuesday, many elections will probably remain unsettled. Leigh Chapman, Pennsylvania’s acting secretary of state, wrote that because of a state law prohibiting the counting of mail-in ballots before Election Day, results there will probably take several days. Nevada will also take several days after the election to count mail-in ballots. Some Republicans, including Lake and Finchem, won’t commit to accepting the result if they lose. We can expect others to sow doubt about the process if they start falling behind as mail-in votes come in.

As the Democratic strategist Michael Podhorzer put it, “When it comes to the postelection crisis, 2020 was like the beginning of ‘The Sorcerer’s Apprentice,’ and 2022 will be more like the part where the walking mops multiply out of control.” We should be ready for what could soon be unleashed.