Maybe it’s a good thing that we’re more focused on Biden. Or maybe we’ve just given up.

By Gail Collins and Bret Stephens

Ms. Collins and Mr. Stephens are opinion columnists. They converse every week. 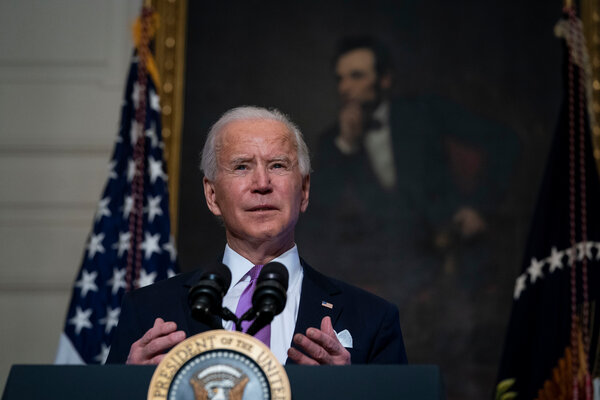 Bret Stephens: Good morning, Gail. Let’s not start with impeachment trial No. 2, if only because I’d rather not have to think about you-know-who from the start.

Over the weekend I read The Times’s distressing account of a new migrant crisis brewing at the border. Thousands of families on the Mexican side of the U.S.-Mexico border are betting that laxer rules coming from the Biden administration will make it easier for them to get to the United States and remain here. And tougher rules by the Mexican government make it more difficult for the U.S. to deport them back to Mexico. Throw in fears about further spread of the coronavirus, and it has the makings of the administration’s first self-made crisis.

You know that I’m a big supporter of comprehensive immigration reform. But President Biden’s promise to take a more compassionate approach to migrants just seems primed to generate another humanitarian disaster, not to mention a political gift to the Trumpian right. Your thoughts?

Gail Collins: Bret, I’m in need of a little cheer. We’re not even halfway through pandemic February. Can’t we block out the border crisis and talk about … the Super Bowl? Really, times like these are why they invented sports.

Bret: The Super Bowl left me too depressed for words. Let’s stick to happier topics, like the border crisis.

Gail: OK then. The border situation is a mess. It’s been a mess for ages. Obama struggled with it. Trump built his presidential candidacy around that Great Wall theory. Wall never got finished and he made everything worse.

Bret: Don’t tell anyone, but I’ve grown more sympathetic to the idea of a wall as part of an overall solution.

Gail: My lips are sealed. The answer is going to have to be a combination of a more efficient method of handling the cases of border applicants for admission, reforming enforcement so the American side isn’t stuffed with people who hate the immigrants. And then we’ve got the Dreamers …

Bret: Immediate citizenship for the Dreamers. A long but straightforward path to citizenship for those who are here already and have broken no laws besides being undocumented. A humane and generous policy with respect to political refugees. Well-regulated ports of entry. Strict enforcement of the law. The overall immigration solution seems pretty clear to me.

Gail: So far, not much argument here. Go on.

Bret: The problem is politics. As with Newton’s third law of motion, every progressive action will have an equal and opposite Trumpian reaction. Which is why Biden needs to seize the middle ground here.

Gail: All I was hoping for in early Biden was a pledge to tackle the problem and an infusion of new officials who had an attitude that was both sympathetic and realistic. We’ve gotten that. Much, much more to come.

Bret: Well, it’s definitely nicer to have arguments over policy than to worry together about the death of liberal democracy.

Gail: Sure, although by summertime we may have ground through so many policy arguments we’ll be wistfully recalling the time when all we had to do was yowl about Trump in total sync.

Bret: Speaking of policy, even Larry Summers is worried that Biden’s $1.9 trillion stimulus is, as they used to say about New York City rents, too damn high. It probably won’t surprise you that I agree with him. Do you see no risk in such a giant bill?

Gail: Summers sort of makes his reputation off disagreeing with liberal policy in a way that causes people to say, “Even Larry Summers …”

Bret: Noted. And largely off topic: Last month I took my filthy rental car through a carwash in Santa Fe, N.M., thus disproving Summers’s Law that “in the history of the world, no one has ever washed a rental car.” Sorry, go on.

Gail: But about the Biden plan. We’re in one of those economic holes that needs a big, big jolt to get things running well again. And the final program is very likely to be stripped of some of the big things you objected to, like the $15 minimum wage.