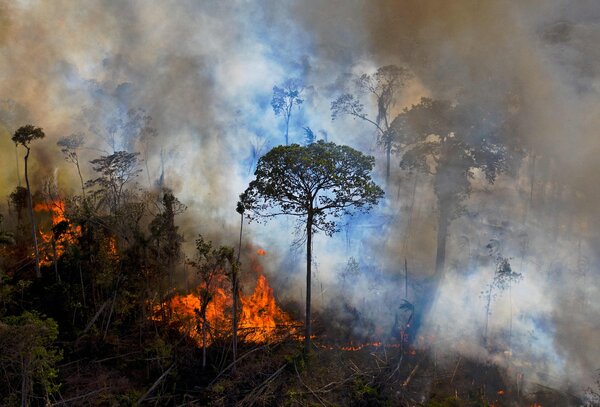 There was no good time for Vladimir Putin’s unprovoked, idiotic invasion of Ukraine. But this is a uniquely bad time. Because it’s diverting worldwide attention and resources needed to mitigate climate change — during what may be the last decade when we still have a chance to manage the climate extremes that are now unavoidable and avoid those that could become unmanageable.

That is why I’ve argued that Russia’s attack on Ukraine is the real World War I. Two-thirds of the planet’s people can now watch it on their smartphones, and virtually everyone has been or will be touched by this war economically, geopolitically and, maybe most important, environmentally.

The best way to appreciate that is by talking to people who live in some of the world’s most remote ecosystems. I’m talking about Indigenous communities residing deep inside, and protecting, the world’s remaining forests, particularly the megaforests free of roads, power lines, mines, cities and industrial agriculture. These intact forests — from those in the Amazon and Congo River basins to ones in Canada, Russia and Ecuador — are the world’s life-support system. They sponge billions of tons of carbon dioxide out of the atmosphere, generating oxygen, filtering freshwater to drink and generally strengthening our resilience against the pressures of climate change.

These forests and their Indigenous people were already under pressure from global economic forces, but Putin’s war set off a cascade of negative effects: Russia is one of the largest fertilizer producers in the world. The largest oil exporter to global markets. And more than a quarter of the world’s wheat is normally exported by Russia and Ukraine, providing bread for billions of people, as well as barley, sunflower seed oil and corn. Because of both the war and sanctions on Russia, shortages and prices on these commodities have spiked, increasing pressures all over the planet to strip more intact forest to drill for oil, plant crops for agribusinesses and create land for cattle grazing.

Last week Nia Tero, a global nonprofit that supports the Indigenous peoples who are guardians of these endangered forests, invited me to moderate a public discussion by Indigenous leaders visiting New York City for Climate Week. Nia Tero points to statistics showing that Indigenous territories encompass over a third of Earth’s intact forests and similar portions of other vital ecosystems, safeguarding a significant share of the world’s biodiversity. Carbon stored in Indigenous forests in the Amazon, for instance, is far less likely to be lost to the atmosphere than that on private and other unprotected lands.

Unfortunately, the more we destroy these forests, peat lands and mangroves, it also becomes far less likely that we will get anywhere near the goal of the Paris climate agreement of limiting global warming to 1.5 degrees Celsius above preindustrial levels.

Nemonte Nenquimo won the Goldman Environmental Prize in 2020 for leading a legal fight on behalf of Indigenous communities in Ecuador — one of the 10 most biodiverse countries on Earth — “that resulted in a court ruling protecting 500,000 acres of Amazonian rainforest and Waorani territory from oil extraction,” the citation said. “Nenquimo’s leadership and the lawsuit set a legal precedent for Indigenous rights in Ecuador, and other tribes are following in her footsteps to protect additional tracts of rainforest from oil extraction.”

A great honor. But she told me last week that despite her legal victory, soaring oil prices emanating from the Ukraine war have put renewed pressure on her Indigenous community’s forests. As she put it, “The oil is in the forest, and they think our home is the solution.”

As John Reid, the senior economist for Nia Tero, explained, “Supply shocks from Ukraine and Russia become demand shocks across the world, including in the intact forests, because the intact forests are all big potential suppliers of agricultural commodities, gold, oil, gas and wood.” (Reid and Thomas E. Lovejoy wrote “Ever Green: Saving Big Forests to Save the Planet,” an outstanding primer on the vital role intact forests play in sustaining the biosphere.)

Hindou Oumarou Ibrahim is a leader of the Mbororo pastoralist people in Chad. It is bad enough, she told me, that Lake Chad has lost about 90 percent of its water and many of its species, but now people in her community are asking her: “Why has the price of flour and fuel gone up so high? Russia and Ukraine are very far away, so why are we hurt?” They don’t understand how the shocks of a war in Ukraine can radiate far enough to hit even landlocked, sub-Saharan Chad.

“When the war started,” added Ibrahim, “the African countries were asked to choose a side. And all we were thinking is that we need food. This war has become a big problem for all of us.” Everywhere she turns now, she added, Chinese companies are looking for land for industrial agriculture, which is a huge problem for her pastoralist people.

“For Indigenous peoples, the land is everything,” Ibrahim wrote in an essay last week in The Mail & Guardian, which is based in South Africa. “It is the source of our food, shelter and medicine, as well as the wellspring of our culture and history. Over countless generations, we have learned to live well on our land. We know how to protect it, how to restore it and how to serve as its engineers and nurturers rather than its destroyers.”

Unfortunately, some greedy leaders, like President Jair Bolsonaro of Brazil, resent the fact that Indigenous peoples control precious resources — in the case of Brazil, over 13 percent of its territory, much of it intact forest. Brazil bought $3.5 billion worth of fertilizer from Russia last year, a flow now constricted by Western sanctions. So as soon as the war started creating fertilizer shortages, Bolsonaro blurted out: “This crisis is a good opportunity for us,” The Washington Post reported. “Where there’s Indigenous land, there are riches beneath it.”

He then moved to pass legislation that would enable companies to mine potassium from Indigenous people’s forests so Brazil can make more of its own fertilizer.

Then there is Ukraine itself. Before the war, it had significant ancient forests, “which have been left untouched by human impact,” according to the World Wide Fund for Nature. Since the invasion, Russian military activity has damaged “900 protected natural areas,” according to an O.E.C.D. report issued in July, “and an estimated 1.2 million hectares, or about 30 percent of all protected areas of Ukraine.”

On top of that, Russia, Belarus and Ukraine accounted for a quarter of the worldwide timber trade last year. Because of the war and sanctions on Russia, other timber-producing and -exporting nations are doubling down to make up the shortfall by loosening environmental protections, The Financial Times reported: “Soon after February’s invasion, Kyiv lifted a regulation that prohibits logging in protected forests during spring and early summer” to help raise money for the war. “Environmental groups fear the decision could lead to large-scale losses in areas where illegal logging and forest mismanagement are already rife.”

Over the past half century, noted Reid, “countries have taken big collaborative leaps in protecting the environment and its stewards — whether it is the Clean Air Act of 1970 in America or Brazil’s 1988 Constitution recognizing the rights of its Indigenous peoples to control the lands they have protected for millenniums. Protected land has more than doubled worldwide since 1990.” And now, out of nowhere, one man launches a murderous war in the heart of the world’s breadbasket, and suddenly all the progress on norms and laws risks going up in smoke, right along with the forests.