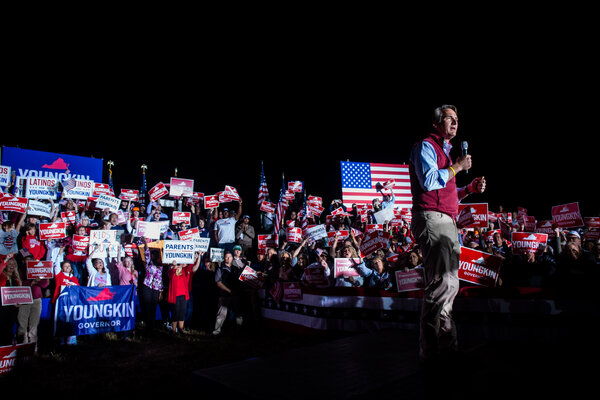 Ms. Cottle is a member of the editorial board.

With just under a week to go, the governor’s race in Virginia has gotten tighter than Spanx on a hippo, prompting much agita in Democratic circles. When the Democrats won full control of the statehouse in 2019, for the first time in over 20 years, many political watchers declared the swing state’s blue shift complete. But a recent poll from Monmouth University has the party’s nominee, the former governor Terry McAuliffe, tied with Glenn Youngkin, a former private equity exec who has flirted with the election-fraud lies that are now dogma in Donald Trump’s G.O.P.

Virginia has a pesky habit of picking governors from the party that doesn’t hold the White House. To raise the stakes: This election is seen as a harbinger of next year’s midterms. Mobilizing base voters is considered the key to victory.

None of which is great news for the Democratic Party, which is confronting multiple warning signs that its voters are not all that fired up about the Virginia race — or about politics in general.

The Monmouth poll found Virginia Republicans more motivated and more enthusiastic than Democrats about this election, gaps that have widened in recent months.

Compounding concerns are findings from a series of focus groups conducted this year by the Democratic firm Lake Research Partners, targeting Democrats considered less likely to turn out at the polls. It found a couple of reasons that some Virginia women are uninspired by the political scene. Among Black women, there is frustration that Democrats won’t deliver for them, and so it doesn’t much matter which party’s candidates win, explains Joshua Ulibarri, who heads the firm’s Virginia research. Among younger women, especially Latinas and white women, there is a sense that the Trump danger has passed and that they can let their guard down. “They think we have slayed the giant,” says Mr. Ulibarri. “They think Republicans are more sane and centered now.”

Oof. Who’s going to break it to them?

The challenge extends beyond Virginia. Almost half of women in four crucial swing states — Arizona, Georgia, Pennsylvania and Wisconsin — are paying less attention to politics since Mr. Trump left office, according to a May survey by American Bridge 21st Century, a Democratic super PAC. This includes 46 percent of Biden voters — particularly those who are younger, are college educated or are urban dwellers. Focus groups that the firm conducted in August yielded similar findings.

When it comes to 2022, younger voters are feeling particularly uninspired, according to a September survey by Lake Research and Emerson College Polling on behalf of All In Together, an advocacy group that encourages women’s involvement in politics. Only 35 percent of voters 18 to 29 years old said they were very motivated to vote next year, and just 28 percent said they were certain to vote. “This engagement gap could be a major concern for Democrats,” the group noted, pointing to research from Tufts University showing the importance of young voters to Joe Biden’s candidacy in multiple swing states last year.

This kind of deflation was perhaps inevitable. The Trump years were the political equivalent of being tweaked out on meth 24/7. All those scandals. All those protests. So many constitutional crises. Two impeachments. It was enough to exhaust any normal person.

Mr. Biden built his brand on the promise to dial back the crazy and start the healing. Non-MAGA voters liked him in part because they longed for a president — and a political scene — they could forget about for weeks on end. Having weathered the storm, everyone deserves a break.

But if Democrats lose their sense of urgency when it comes to voting, the party is in serious trouble. Republicans are working hard to keep their voters outraged and thus primed to turn out. They are seeking to capitalize on a difference in motivation between the parties that Mr. Trump neatly exploited in his rise to power.

As is often noted, the essence of the modern Republican Party has been boiled down to: Own the libs. The impulse on the other side is not parallel. Democrats try to mobilize their voters with promises to enact popular policies — paid family leave, expanded Medicare coverage, cheaper prescription drugs, universal pre-K and so on. Democratic voters were desperate to send Mr. Trump packing. But beyond that, what many, many blue-staters want isn’t to own red-state America so much as to return to ignoring it altogether.

Conservatives see the culture and economy evolving in key ways, leaving them behind. Ignoring the shift isn’t an option for them. Mr. Trump electrified much of red-state America by promising to beat back the changes — and, better still, bring to heel the condescending urban elites driving them. The lie that the 2020 presidential election was stolen further fuels conservatives’ existing sense that progressives are destroying their world.

Outrage and fear are powerful motivators — ones at which Mr. Trump and his breed of Republicans excel. So while the non-MAGA electorate may be rightly exhausted, Democrats should beware of letting their voters get comfy or complacent just because Mr. Trump is currently cooling his heels in Florida. That is exactly what his Republican Party is counting on in Virginia — and everywhere else.