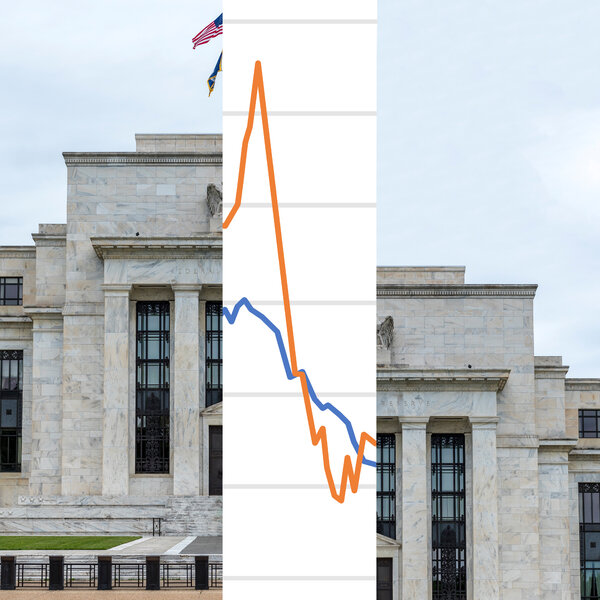 The basic story of U.S. economic policy right now is all about the Federal Reserve, which is trying to bring inflation down by raising interest rates, which should cool off the economy.

The Fed’s actions have, in fact, been successful in producing a major tightening of financial conditions. For the most part, Fed policy works through two channels: Tight money raises mortgage rates, which causes a housing slump, and it also leads to a strong dollar, which eventually makes U.S. goods less competitive on world markets. Both channels have been working, at least as far as financial markets are concerned:

So far, however, there hasn’t been much evidence of economic cooling. The most recent inflation report from the Bureau of Labor Statistics came in hot. The G.D.P. report released Thursday was fairly strong, clearly refuting claims that we’re in a recession.

So doesn’t this say that the Fed needs to do more? Don’t the numbers speak for themselves?

Well, no. Numbers rarely do.

There’s a cacophony of voices among economists right now, which put me in mind of a line from my old teacher Charles Kindleberger, from back in the days when economists obsessed about the balance of payments. (They no longer do, which is a whole other story.) He wrote that “the existence of a variety of balance-of-payments definitions makes it possible for an observer always to be grave, or optimistic, according to his temperament.” So it is now with Fed policy and the inflation outlook.

The headline number was indeed pretty strong — 2.6 percent growth at an annual rate, after two quarters of decline. But quarter-to-quarter fluctuations in growth are often driven by volatile items that tell you little about underlying trends. In this case, the quarter’s growth is more than explained by a drop in the real trade deficit (which made up for softer results elsewhere), probably reflecting the ripple effects from supply chain disruptions that have mostly faded away.

Some observers like to focus on “core G.D.P.,” which excludes net exports, inventory changes and government purchases. Where the headline number shows an economy that slumped in the first half of this year and resumed growth in the third quarter, core G.D.P. tells us a tale of an economy steadily slowing, and currently more or less stalled:

But wait, there’s more. Stripping out the effects of the U.S. trade deficit is helpful as a way to dampen the statistical noise, but looking forward, we should expect the strong dollar to weigh on exports and become a major drag on the economy.

Why haven’t we seen this yet? Mainly because the effects of a strong dollar on trade, while they can be powerful, take a long time to materialize. In international macroeconomics, one of my home academic fields, the general view — shaped in large part by the effects of a rising dollar in the early 1980s, then a big fall after 1985 — has been that the negative impact of a strong dollar on the trade balance takes two years or more to fully manifest. Following that theory, here’s a plot of a measure of the average value of the dollar against other major currencies, adjusted for inflation, versus the real trade deficit as a percentage of G.D.P., in which I’ve lagged the exchange rate by eight quarters:

The fluctuations match up pretty well, although there has been a long-run tendency for the U.S. trade deficit to widen for any given value of the dollar — probably reflecting factors like the rise of China.

The point is that the negative effects of one of the two channels through which the Fed has been trying to affect the economy are still largely in the future.

I’m less clear about the other one, mortgage rates: Housing investment has already been falling, dragging down growth. And while it will surely continue to fall, I don’t know whether it will be a bigger drag looking forward.

What seems fairly clear, however, is that we have yet to see anything like the full effects of Fed tightening on the economy.

What about inflation? Here, too, there are good reasons to believe that there are long lags between policy changes and the reported numbers. Perhaps most important is the way the Bureau of Labor Statistics measures the cost of housing, which largely reflects the average amount paid by renters, which is then used to estimate an “imputed” cost for homeowners — in effect, what they would be paying if they were renting their dwellings.

This procedure makes sense for evaluating the cost of living, but it can be problematic as a way of judging the current state of the economy. Why? Because most renters have leases, so the amount they pay lags far behind the rates paid by new renters. A recent study by the B.L.S. found that this lag averages about a year.

What this means is that the official measure of shelter inflation, which is a large part of overall inflation and an even larger part of various measures of underlying inflation, reflects conditions in the housing market in late 2021, not conditions today. Back then, as it happens, rents were rising at a double-digit rate — in large part, some research suggests, because of the rise of remote work, which led people to want more space.

But all of this appears to be behind us. A recent analysis by Goldman Sachs estimated that market rents are currently rising at an annual rate of only 3 percent, about the rate before the pandemic, and many analysts expect rents to slow even further, or perhaps even begin to fall. This slowdown will eventually show up in official measures of inflation — but not until sometime next year.

Is “true” inflation really coming down? Like many economic observers, I was waiting with some trepidation for Friday morning’s release of the Employment Cost Index, widely viewed as a better measure of wage growth than the simple average wage. Would it contradict other data suggesting slowing wages? Well, it didn’t:

Wages are still rising too fast to be consistent with the Fed’s inflation target, but if the economy is really set to weaken, wage growth will probably weaken too. Furthermore, you can argue that past wage growth, like surging rents, partly reflected a one-time adjustment to pandemic-related shocks, which will go away over time.

So does the Fed need to do more, or has it already done too much? It’s a judgment call. There is, I’d argue, a strong case to be made that there’s considerable future disinflation already in the pipeline. But is it enough to justify a Fed pause after its next interest rate hike (which is clearly going to happen)? Well, as Kindleberger would have said, there are enough measures out there to let you be either optimistic or pessimistic about inflation, according to your temperament.

Over the past year, optimists like me were wrong, while pessimists were right. But past results are no guarantee of future performance.