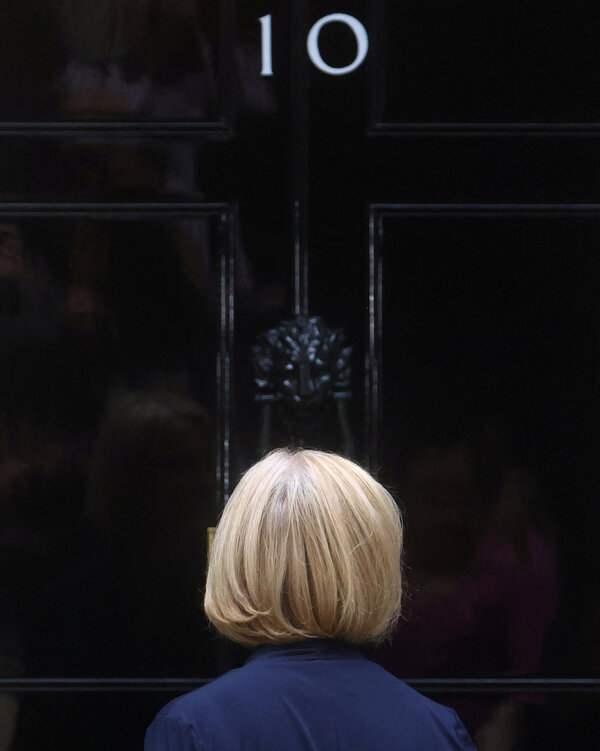 Britain is in a very difficult economic position. The British economy, like the U.S. economy, seems to be seriously overheated, with substantial amounts of inflation driven by high domestic demand. Unlike America, it is also facing the full force of Europe’s energy crisis, driven by the efforts of President Vladimir Putin of Russia to use a shut off of natural gas to bully the West into abandoning Ukraine.

So many of us expected Britain’s economy to go through a rough patch in the months, or maybe even years, ahead. What few foresaw, as far as I can tell, was a policy zombie apocalypse.

I’ve written a lot over the years about zombie economic ideas — ideas that have failed repeatedly in practice, and should be dead, but somehow are still shambling around, eating policymakers’ brains. The pre-eminent zombie in American economic discourse has long been the belief that cutting taxes on the rich will create an economic miracle.

That belief is still out there: Even as its infrastructure was collapsing to the point that its largest city no longer had running water, Mississippi tried to raise its economic fortunes with … a tax cut. But in America, zombie economics has lately been overshadowed by zombie beliefs about election fraud, the impact of immigration and so on.

Britain, however, doesn’t (yet?) have an equivalent of the MAGA movement. What it does have is Liz Truss, a new prime minister who seems to be an ardent believer in economic fallacies from the Thatcher/Reagan era.

Before I get to the economic plan that has produced chaos in Britain’s bond and currency markets, let’s talk about the myths that seem to have inspired her.

Of course, people on the right, raised on the legend of Saint Reagan, believe that his tax cuts did wonders for the U.S. economy. But the data don’t agree.

Note both the steepness of the Reagan cut and the rise under Clinton, both of which are relevant to the story.

So what did happen to economic growth? It’s important to distinguish between the long-run trend — which was what tax cuts were supposed to improve — and business cycle fluctuations. Here’s real G.D.P. from the early 1970s (when for some reason growth slowed around the world) until the end of the Reagan era, measured on a log scale so that a straight line represents steady growth:

I’ve also included a red line showing the growth trend over the whole period. What this picture suggests is that underlying U.S. growth was pretty much unchanged through the 1970s and 1980s. The economy slumped during recessions — especially the double-dip recession of 1979-82 — and grew rapidly during recoveries, but by the end of Reagan’s reign it was more or less exactly where you would have expected it to be if you extrapolated the trend from 1973 to 1979.

And let’s extend the picture through the 1990s:

Bill Clinton effectively undid the original Reagan tax cuts, amid many predictions of imminent disaster. The economy actually grew somewhat faster than it had under Reagan, and by the end of the Clinton years it was above the level it would have reached if you just extrapolated the 1973-1989 trend.

There have also been multiple state-level examples. There was the Kansas tax-cut “experiment,” which was a flat failure. There was Jerry Brown’s California tax hike, which some on the right called “economic suicide,” but somehow failed to prevent an economic boom.

Finally, there’s evidence from abroad. As Martin Wolf of The Financial Times points out, since Margaret Thatcher, Britain has been relatively deregulated and low tax compared with its European neighbors. Its relative economic position hasn’t changed much at all.

So there is no reason anyone who isn’t a right-wing apparatchik, sealed in a hermetic intellectual bubble, should believe that tax cuts for the rich are the answer to what ails us.

Yet on Friday, the Truss government announced plans for big tax cuts, notably a 5 percentage point cut in the tax rate on top earners and cancellation of a planned tax hike on corporations. Unusually, these plans were described as a “fiscal event” rather than a budget, allowing the government to avoid presenting any detailed fiscal or economic projections — projections that would surely have been either dire, ludicrous or both. But officials still insisted, despite all the historical evidence to the contrary, that their tax cuts would do great things for the British economy.

Obviously, I don’t believe their assurances. More important, neither do financial markets. Interest rates soared on the prospect of increased government borrowing, while the foreign exchange value of the pound plunged.

Either of these market movements would, on its own, have been a signal that investors don’t think the Truss government knows what it’s doing. But their combination is especially ominous.

But right now, British markets aren’t acting like those of an advanced country. They are, instead, behaving like those of a developing country, in which investors tend to see budget deficits as a sign of irresponsibility and a harbinger of future policy disaster.

The markets may be overdoing it. Britain isn’t Argentina, and it surely has the economic, the administrative and, I think, the political capacity to turn things around. But the fact that markets are treating it as if it were Argentina shows just how extraordinary a crisis of confidence Liz Truss has managed to create within days of moving into No. 10 Downing Street.