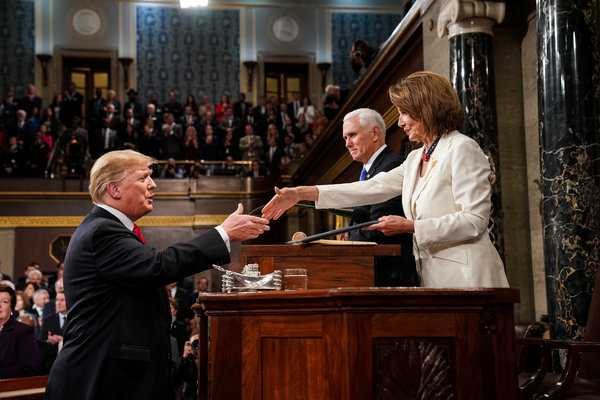 State of the Union address raises tensions on wall

President Trump started his lengthy State of the Union address touting a strong economy and legislative accomplishments. But he then derided “ridiculous partisan investigations” as a threat to an American “economic miracle,” and the mood in the chamber darkened when he pivoted to his demand for a wall on the southern border.

Groans rose from Democrats as he mentioned plans to send more troops to the border to meet a “tremendous onslaught” of migrants. And he alluded to his threat of partly shutting down the government again on Feb. 15 if Congress doesn’t give him money for a wall.

There were moments of warmth, as when Mr. Trump celebrated the record number of women in the new Congress. But our reporter writes that the president ultimately showed little interest in building bridges with newly empowered Democrats.

Here’s a fact check, and highlights.

Details: Mr. Trump unveiled an ambitious goal of halting the transmission of H.I.V. in the U.S. by 2030. He hit hawkish notes on trade talks with China and defended his planned withdrawal of troops from Syria and negotiations with the Taliban in Afghanistan, saying that “great powers do not fight endless wars.” And he called his relationship with Kim Jong-un, the North Korean leader, a “good one,” announcing that they will meet in Vietnam this month.

Behind the scenes: In a lunch with TV anchors before the address, Mr. Trump referred to Senator Chuck Schumer, the minority leader, using an expletive, and asserted that Senator John McCain, the late Republican lawmaker, had written a book that “bombed.”

On the plane returning from the United Arab Emirates, the pope said that the Roman Catholic Church had a persistent problem of sexual abuse against nuns by priests and bishops. It was the first time he had commented on the issue.

The pope said the Vatican had suspended some priests. “Should more be done? Yes,” he said, adding that “it is a path that we have already begun.”

Background: Catholic nuns in India, Italy and some African nations have accused clerics of sexual abuse in recent years. Last week, a Vatican magazine wrote about nuns who were either having abortions or giving birth to priests’ children.

In Abu Dhabi: Francis celebrated Mass with about 135,000 Catholics, the largest public Christian rite in the history of the United Arab Emirates.

An offer to Venezuela: The pope also expressed a willingness to mediate in Venezuela’s political crisis if asked by President Nicolás Maduro and the opposition leader, Juan Guaidó.

Yesterday, we told you about the prospect of glaciers in the Himalayas melting by a third or more over the next 80 years.

In places like Japan and Wisconsin, ice is already vanishing. Lakes that used to routinely freeze over no longer do.

Details: For the first time, scientists have quantified the effects of climate change on ice cover across 1.4 million lakes in the Northern Hemisphere. They found that thousands have already experienced years without ice and that “an extensive loss of lake ice will occur within the next generation.”

Why it matters: Without ice, lakes begin warming earlier in the year, which increases the risk of toxic algal blooms and stresses certain fish. Dependably frozen lakes support cultural and economic activities, and ice roads across lakes and rivers provide lifelines for remote areas.

Representatives from the insurgent group and former Afghan officials kicked off two days of talks in Moscow aimed at ending the yearslong conflict.

Details: The talks offer a window into any future peace deal. The Taliban, who barred women from public life during their time in power, said they now respected women’s rights to education and work — a claim met with skepticism in Afghanistan. One former lawmaker urged a gradual withdrawal of foreign troops.

In Afghanistan: None of the talks have included representatives of the U.S.-backed government in Kabul. President Ashraf Ghani criticized the Moscow meeting as an attempt to undermine the authority of the Afghan state, though Afghanistan’s political elite is beginning to rally around the peace effort.

Venezuela: Opposition leaders said they planned to deliver food and medicine donations to ease the country’s shortages, a move likely to weaken the authority of President Nicolás Maduro. Some relief organizations fear that the plan could turn aid into a political weapon.

Paris: At least 10 people were killed and 37 injured when a fire tore through an eight-story building — the deadliest blaze in the French capital in over a decade. The fire appeared to be tied to a neighborhood dispute, and the authorities are treating it as possible arson.

#MeToo: An antinuclear activist has accused Oscar Arias Sánchez, the former president of Costa Rica and one of Latin America’s most revered statesmen, of sexually assaulting her four years ago. He denies the allegation.

Islamic State: A British journalist, John Cantlie, who was abducted by the militant group in Syria in 2012 is believed to still be alive, a British official said. Since his capture, Mr. Cantlie has appeared in several online videos, often delivering ISIS propaganda, possibly under coercion.

Hummingbirds: Don’t be fooled by their beautiful colors and teeny-tininess. Studies have found that the birds are ferocious fighters with beaks that have evolved into weapons for male-to-male conflicts.

In memoriam: Izzy Young, 90, whose Greenwich Village shop in New York was the beating heart of the midcentury folk music revival — and who in 1961 presented Bob Dylan’s first concert in the city — died in Stockholm.

Marie Kondo’s methods can help you tidy, but then you have to find a way to keep the junk from creeping back.

Transportation apps relieve the frenzy of navigating an unfamiliar city. Here are a few that go beyond Google Maps and Google Translate.

Anne is remembered today mostly for her bad health, her weight and her many miscarriages.

They are central to how Olivia Colman portrays the queen in “The Favourite,” one of the leading films in this year’s Oscars race. (Ms. Colman got a best actress nod.)

The movie focuses on Anne’s relationship with her favored confidantes — Sarah Churchill and the queen’s cousin Abigail Masham — and power struggles within the royal court.

She’s shown as a weak monarch, if a stubborn one — a view that caught on in her own time and mostly stuck.

But historians see another side to Anne’s reign. She ruled during a period of military and economic progress for Britain, and she oversaw the official unification of England and Scotland, creating the United Kingdom.

Claire Moses, a homescreen editor in our London office, wrote today’s Back Story.

Check out this page to find a Morning Briefing for your region. (In addition to our European edition, we have Australian, Asian and U.S. editions.)

Sign up here to receive an Evening Briefing on U.S. weeknights, and here’s our full range of free newsletters.