On ideological grounds, the Israeli coalition that’s on the verge of ending Benjamin Netanyahu’s long tenure as prime minister does not make a lot of sense.

It includes eight parties, drawn from the hard right, the left and the center — and one Arab party. A more intuitive governing coalition would have comprised only of parties on the right, which together hold a slim majority of Israel’s Parliament.

The largest of the conservative parties, by far, is Likud, which Netanyahu leads. As the prime minister for the past 12 years, he has accomplished much of what the Israeli right has long wanted. He has supported Jewish settlements in heavily Palestinian areas, stepped back from the peace process and reduced the chances of a two-state solution.

Yet many of his allies, led by Naftali Bennett, who once worked as Netanyahu’s chief of staff, are dumping him to work with a coalition that includes social democrats and greens (and an Islamic party). It would be akin to Mitch McConnell abandoning Donald Trump to work with Alexandria Ocasio-Cortez and Chuck Schumer — and Ocasio-Cortez and Schumer saying yes.

What is going on? Today’s newsletter sets out to answer that question, with help from our Times colleagues in Israel.

The McConnell-Trump analogy turns out to be quite useful for understanding Israeli politics.

Netanyahu — like Trump, his ally in global affairs — is the subject of serious allegations of abuse of government. Prosecutors indicted Netanyahu on corruption charges in 2019, and the trial has been delayed partly because of Covid-19 restrictions. The indictment accuses him of altering policies to benefit businessmen, in exchange for a combination of favorable media coverage and nearly $300,000 in gifts. He has denied the charges and called them an attempt by unelected bureaucrats to force him from office.

His attempts to fend off the charges and remain in power have left many Israelis worried about a collapse in judicial independence and the rule of law, much as Democrats were anxious about Trump’s norm-breaking, as David Makovsky of the Washington Institute for Near East Policy explained to me. But there is also a big difference: While Republicans have overwhelmingly stood by Trump, a meaningful number of Netanyahu’s ideological allies have chosen to break with him.

Yifat Shasha-Biton, whose conservative New Hope party is in the coalition that is set to take power, recently said that Netanyahu told “lies without blinking” and was “setting Israel on the path to one-man rule.” Isabel Kershner, a Times correspondent who has been covering Israel since 1990, said many right-wing politicians see Netanyahu “as no longer fit to rule.”

Another factor is that many on the political right feel more secure about Israel’s approach to Palestinian issues than in the past. They no longer fear that major compromises to achieve a two-state solution are imminent. “They can afford to step back,” Makovsky said.

In that way, Netanyahu has helped make his own demise possible. 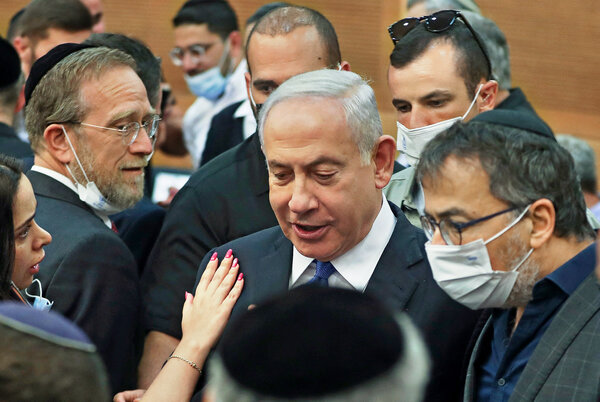 The parliamentary math means that the right-wing parties have to make the hard choice between sticking with Netanyahu and finding partners from the center and the left. There is no conservative majority without Netanyahu’s Likud party — and there are large ideological differences between the right and the center-left, especially on Palestinian issues.

Those differences help explain why it took so long to arrive at last night’s outcome. Israel has held four elections since 2019, with the first three ending in failed attempts to form a lasting government.

“The political crisis in Israel is unprecedented on a global level,” Bennett said in a speech on Sunday. “We could end up with fifth, sixth, even 10th elections, dismantling the walls of the country, brick by brick, until our house falls in on us. Or we can stop the madness and take responsibility.”

Over the last few days, factions from the right, center and left decided that they wanted to be done with Netanyahu. They agreed to a power-sharing agreement in which Bennett and his nationalist Yamina party would hold the prime minister’s position for the first half of the four-year term, to be followed by Yair Lapid, of the centrist Yesh Atid party, who would hold it for the second half.

To keep the coalition together, they have vowed to avoid new policies on Israeli-Palestinian issues at the beginning and to focus on areas where compromise seems more plausible, like education and infrastructure. “The roads are snarled in traffic, the intensive-care units were overwhelmed even before the pandemic, the schools are among the developed world’s worst,” David Halbfinger, a former Times Jerusalem bureau chief, says.

Personal ambition also plays a role. Bennett and Lapid each get the chance to become prime minister, even though their parties won only seven and 17 seats, respectively, in the 120-seat Parliament, known as the Knesset.

Still, it is unclear how long the power-sharing agreement will last. The Knesset must still approve it, and Netanyahu is hoping to derail it by persuading some legislators to defect. Even if he fails, he has signaled his intention to remain active in politics and potentially reclaim his job one day.

“A coalition so ideologically diverse, and united by little aside from a desire to send Netanyahu into retirement, would seem doomed to collapse once that mission had succeeded,” David Halbfinger added. For now, though, it is on the cusp of an unusual victory.

Right-wing lawmakers are facing pressure to reject the coalition, and Netanyahu has vowed to fight.

And how Bennett rose to the top.

Countries that are scrambling for shots are experiencing some of their worst outbreaks.

Donald Trump shut down his blog after less than a month, frustrated by its low readership.

The Trump Justice Department secretly seized phone records of four New York Times reporters in 2017. It did the same for journalists at The Washington Post and CNN.

To protect against hurricanes, Miami needs a 20-foot sea wall running through six miles of the city, the Army Corps of Engineers says.

Iran’s largest Navy ship caught fire and sank in the Gulf of Oman.

The list of the top 10 methane polluters in the U.S. includes some obscure names.

Mike Krzyzewski, the longtime Duke basketball coach, plans to retire after next season.

Lunch money: Your Hometown Deli sells $8 hoagies in rural New Jersey. How can it be worth $113 million?

Woebot: When your therapist is a bot, you can reach it at 2 a.m. Can it really understand you?

Scary luxury: Swimming in a see-through pool, 10 stories up. It’s possible (for some).

A Times classic: Do boys or girls test better in math where you live?

Lives Lived: The Hollywood producer Jerome Hellman made only seven films, but he had a golden touch: His movies, which include “Midnight Cowboy,” won six Academy Awards. He died at 92.

Was 1971 the year music peaked creatively? That’s the argument made by a new documentary on Apple TV+, appropriately titled “1971: The Year That Music Changed Everything.”

Debates about which time periods were the most influential for music are certainly subjective — people have made similar claims for the ’60s, ’80s and ’90s. But 1971 has a strong case. A sampling: Marvin Gaye’s “What’s Going On”; the Rolling Stones’s “Exile on Main St.”; Aretha Franklin’s “Aretha Live at Fillmore West”; John Lennon’s “Imagine”; Joni Mitchell’s “Blue”; and Sly and the Family Stone’s “There’s a Riot Going On.”

“There was something special going on in that moment with the end of the Beatles and the beginning of other artists, who then create what we can now see was the music of the future,” Asif Kapadia, the series’ director, said.

“These were times of social upheaval, not just great music. But they were emboldened by the music, by the empowerment of women and African Americans and gender-bending warriors,” Chris Vognar writes in a review of the show. “It was absolutely an exit point from the ’60s into a hectic new era, hard to define but rich in conflict and possibility.”

The Times Magazine profiled Kevin Durant and (possibly) the greatest basketball team of all time.

Get into rain gardens, which are beautiful and effective at managing storm water.

The pangrams from yesterday’s Spelling Bee were bogeying and obeying. Here is today’s puzzle — or you can play online.

P.S. We’re looking for a writer to join the team that produces this newsletter — somebody with excellent reporting and writing skills and a collaborative spirit.

“The Daily” is about Texas’ Legislature. On the Modern Love podcast, a global romance scam. “Sway” features the W.N.B.A.’s Cathy Engelbert.