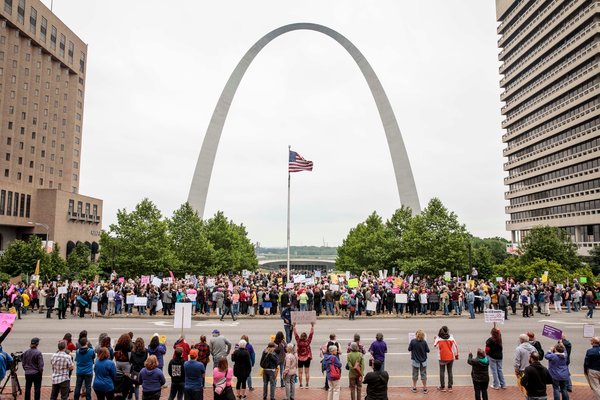 1. The Supreme Court sidestepped a question on state abortion limits, leaving for another day the court’s consideration of Roe v. Wade.

In an apparent compromise, the court upheld an Indiana state law that requires fetal remains to be buried or cremated, but turned down the state’s appeal to reinstate a law banning abortions if based solely on a characteristic like sex or disability.

Separately, Missouri’s last abortion clinic might have to stop providing the procedure by week’s end if the state does not renew the clinic’s license. Above, abortion rights advocates in St. Louis last week. The Times Editorial Board writes that the clinic’s closing would show America what abortion access will look like if Roe v. Wade is overturned.

2. President Trump returned from an official state visit to Japan that he marked by politics at home rather than diplomacy abroad.

The president’s main interest was not where his hosts had tried to direct it — to security and trade in Asia — but on fighting with his perceived political enemies in Washington, our reporter writes in an analysis.

One target of Mr. Trump’s ire: His national security adviser, John Bolton, whom Mr. Trump publicly undercut on Iran and North Korea. The rift raises questions about the administration’s policies on both long-term American adversaries.

That’s how many reports federal government forecasters have received amid a stretch of severe weather that has crippled communities from the Rocky Mountains to the Mid-Atlantic. In the last week alone, the authorities have linked tornadoes to at least seven deaths and scores of injuries.

“We are flirting in uncharted territory,” one meteorologist said. Above, wreckage after a tornado touched down yesterday in Dayton, Ohio.

Separately, for the second time in a week, a single House Republican blocked final passage of a long-delayed $19 billion aid package for communities and farmers still recovering from natural disasters. Passage is all but certain when the full chamber returns next week.

4. We’re still breaking down the results of the European Parliament elections.

More than 50 percent of eligible voters across the European Union cast a ballot, the highest turnout in the past 20 years.

In the end, the established center held, but it was weakened by the insurgence of smaller populist parties. These groups will have to work more closely with liberal members of Parliament to create a working majority.

Now, with the voting over, the haggling over top jobs begins. Here are five of the biggest takeaways.

5. Thirty years ago next week, soldiers shot indiscriminately into crowds of protesters in Tiananmen Square demanding a more open government. Now, a military insider spoke to us for the first time about the crackdown.

Jiang Lin — then a lieutenant in the People’s Liberation Army, a military journalist who had a firsthand view of the decision-making behind closed doors — broke her silence in an interview with The Times in Beijing.

“How could fate suddenly turn so that you could use tanks and machine guns against ordinary people?” Ms. Jiang said. “To me, it was madness.”

That decision was a startling comment on the mistrust that has permeated the Renault-Nissan partnership since the arrest in November of Carlos Ghosn on accusations of financial wrongdoing.

The Renault Nissan Alliance board was expected to meet Wednesday in Tokyo.

7. MacKenzie Bezos promised to give more than half of her fortune to charity after her divorce from the Amazon founder Jeff Bezos. Above, the couple in 2018.

“I have no doubt that tremendous value comes when people act quickly on the impulse to give,” Ms. Bezos wrote. “No drive has more positive ripple effects than the desire to be of service.”

Her stake in Amazon will be worth about $36 billion once the divorce is finalized in July.

Serena Williams wore those words, in French, emblazoned on her latest collaboration with Nike and Off-White. A year after the catsuit controversy, the tennis star is back at the French Open smashing old rules and stereotypes, our chief fashion critic writes.

Ms. Williams had a rocky start before winning her first match at the tournament. Here are today’s results.

Separately, we looked at how a fourth-string goalie for the St. Louis Blues became an improbable catalyst for the team to reach the Stanley Cup finals.

9. Aalborg, Denmark, used to be the country’s industrial center. It’s now on the upswing as a destination as a culture and educational hub.

Our 52 Places Traveler sought out its old-school spots and traditions.

There, as elsewhere on his travels so far, he just said yes, even when he didn’t know what he was saying yes to. “Over the last months I have learned that approach often leads to the most rewarding travel experiences,” he writes.

In other travel news, this man is the only chief meteorologist working in the cruise industry. Surprisingly, hurricanes are not his biggest concern.

10. And finally, the subway can be stranger than fiction.

Our New York City transit reporter took a break from chronicling tales of subway hell to appreciate one of the best parts about riding the subway: the weird and beautiful things riders regularly stumble upon.

Recent sightings include a construction beam the length of a subway car, a couch and a giant dog in a makeshift sack. We’ve rounded up some of our favorite oddities.

Have an easy commute home, and a pleasant evening.