An explosion at a chemical plant in southeastern Texas has injured at least three people and forced evacuations. 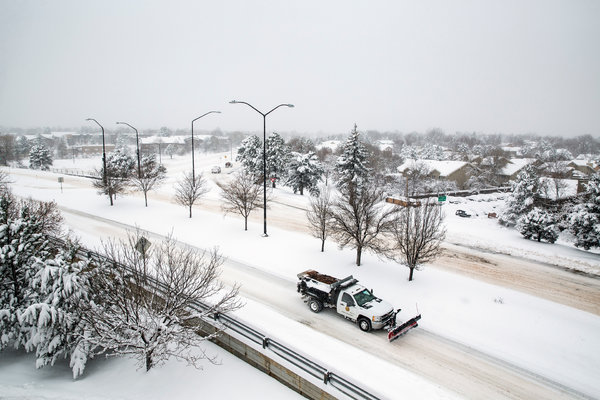 Powerful winds are expected today in the Northwest, along with blizzard conditions in the Midwest and rain in the Northeast, after foul weather disrupted plans during one of the busiest travel weeks of the year. Here are the latest updates.

Hundreds of flights were canceled and parts of interstate highways were closed on Tuesday because of unsafe conditions.

Expected high winds in New York on Thursday could ground some of the giant balloons for the Macy’s Thanksgiving Day Parade.

From The Times: Editors and writers from our Food section took sides in some of the holiday’s fiercest culinary debates. To brine or not to brine?

Quiz: How much do you know about turkey pardons, football and the dangers of deep-frying? Test yourself.

A White House budget official told impeachment investigators this month that two of his colleagues had resigned after President Trump’s decision to withhold military assistance to Ukraine.

A transcript of the testimony by the official, Mark Sandy, was released on Tuesday. He didn’t identify either colleague, and it was unclear how directly their resignations were tied to their concerns over the aid.

The issue is at the heart of the impeachment inquiry. The president has said he never pressured Ukraine for investigations of his political rivals or tied the aid to them.

Related: Mr. Trump knew that a whistle-blower had accused him of wrongdoing by the time he released the aid to Ukraine in September, two people familiar with the matter told The Times.

The Daily: Today’s episode is about how the Biden family was drawn into the Ukraine affair.

What’s next: The House Judiciary Committee will hold hearings as part of the inquiry next week.

Increased death rates among middle-aged people extend to all racial and ethnic groups, and geographic regions, despite a recent focus on white Americans in rural areas who die of drug overdoses, alcoholism and suicide.

According to a study published on Tuesday, death rates for people aged 25 to 64 increased in nearly every state from 2010 to 2017.

Quotable: “The whole country is at a health disadvantage compared to other wealthy nations,” the study’s lead author said. “We are losing people in the most productive period of their lives.”

Related: The country’s fertility rate fell in 2018 for the fourth straight year, the federal government said today. There were 59.1 births for every 1,000 women of childbearing age in the U.S. last year, a record low.

‘All we can do is sit and wait’

More than two years after back-to-back hurricanes hit the U.S. territories of Puerto Rico and the Virgin Islands, an examination of Federal Emergency Management Agency records indicates that recovery efforts there have stalled compared with those in states on the mainland.

FEMA officials say much of the problem lies with a system in which local governments or charities pay to begin recovery efforts and are later reimbursed by the federal government. But the islands have seen a sluggish economic recovery, complicated by corruption and, islanders say, questions of race.

Why it matters: The disparity in the response shows how Washington has treated citizens on the mainland, with voting representatives in Congress and a say in presidential elections, compared with citizens on the islands.

Response: “Comparing disasters misleads the American people,” Jeffrey Byard, an official with FEMA’s Office of Response and Recovery, said. “Each event has a unique set of circumstances, and numbers alone cannot and do not provide a complete picture of what is needed to help communities recover.”

If you have some time, this is worth it

A sequel that arrives every seven years

In 1964, a TV crew followed a group of 7-year-olds from various socioeconomic backgrounds in Britain to explore the subject of class.

The director Michael Apted returned to interview them every seven years, creating what has arguably become the most profound documentary series in the history of cinema. The Times Magazine explores the “Up” series as the project nears its conclusion.

Feral hog attack: A woman in Texas was killed in what was only the country’s fifth documented deadly hog attack in nearly 200 years.

Earthquake’s aftermath: The death toll in Albania rose to at least 24 today after one of the strongest tremors to hit the country in decades.

Measles: Reported cases of the largely preventable disease jumped 300 percent in the first three months of this year compared with the same period in 2018, according to the World Health Organization.

Snapshot: Above, the ruins of Hampi, a once-thriving civilization in southern India. It’s the latest stop for our 52 Places traveler.

Late-night comedy: President Trump pardoned two turkeys, named Bread and Butter, as part of the annual White House Thanksgiving tradition. Jimmy Fallon said, “I saw that you could actually go online and vote for which turkey got the official pardon, which is why Butter’s lawyer got caught in Ukraine trying to find dirt on Bread.”

What we’re reading: This piece from Politico, by Ryan Lizza. Bill Wasik, the deputy editor of The Times Magazine, calls it a “truly unmissable piece of reporting and synthesis about Barack Obama’s mind-set toward the 2020 primary.”

Watch: In “The Two Popes,” Jonathan Pryce (as the future Pope Francis) and Anthony Hopkins (as Pope Benedict XVI) star in a study of faith, friendship and power.

Read: Our Book Review has compiled a list of 100 notable titles from this year.

Smarter Living: Just in case, here’s how to defuse tension at your holiday table.

Celery — the subject of at least three food fads over the last 150 years — may finally be ready for a permanent starring role.

The vegetable, grown for centuries in the Mediterranean, became wildly popular in the late 19th century. Raw stalks were arranged in crystal vases on dinner tables created to show off the era’s “It” ingredient.

In the U.S., Dutch immigrants started growing the vegetable as early as 1874 near Kalamazoo, Mich., which was subsequently nicknamed Celery City. The seeds were disseminated across the country, and another celery craze ensued.

Fast-forward to 2018: “Last year, we had a huge spike in consumption because a Kardashian started juicing it and put it on her Instagram,” said Jake Willbrandt, a fifth-generation celery farmer in Decatur, Mich. (Dietitians say the juice is good for you, but is not a cure-all.)

That’s it for this briefing.

We’re off tomorrow for Thanksgiving, but we’ll return on Friday.

Thank you
Mark Josephson and Eleanor Stanford provided the break from the news. Today’s Back Story was based on reporting by Alexa Weibel. You can reach the team at [email protected]

P.S.
• We’re listening to “The Daily.” Today’s episode is about the Bidens’ work in Ukraine.
• Here’s today’s Mini Crossword, and a clue: Thanks given in German (five letters). You can find all our puzzles here.
• The A.V. Club named The Times’s audio series “1619” as one of the podcasts that defined the 2010s.