Good morning. Trump said he was ending talks over a new relief bill. Top U.S. military leaders are in quarantine. And the president’s numbers are slipping with older voters. 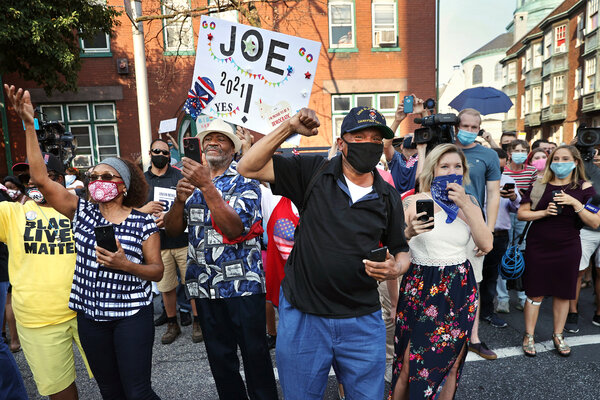 The gray revolt against Trump

President Trump is losing his fellow baby boomers. Their turnabout is the central reason he trails Joe Biden by a substantial — and apparently growing — margin.

Four years ago, Trump handily won his own generation, which is generally defined as being born between 1946 and 1964, while losing every younger generation. The Pew Research Center estimates that Trump beat Hillary Clinton by nine percentage points among voters 65 and older.

Why is it happening? Older Americans began to drift away from Trump even before the coronavirus. Some don’t like his “chaotic and unconventional presidency,” as Ella Nilsen of Vox points out. Others may be more open to supporting Biden than Clinton — given his gender and what polls show to be his lower negativity ratings and less liberal image. Baby boomers also have experience living in a less polarized country, when vote switching was more common.

But the virus seems to be a factor, too. Many older Americans understand that other countries have handled the virus better than the U.S. They are tired of the restrictions of pandemic life. And many boomers are afraid — for good reason, given that about 150,000 of the 210,000 confirmed U.S. virus deaths have occurred among people 65 or older.

There are only two age groups that continue to support Trump, according to Times polls conducted over the past month. The first is a narrow slice of people older than baby boomers, typically in their late 70s, who have long been conservative. The second is a group of middle-aged people who include the youngest boomers and the oldest members of Generation X:

The middle-aged group is less vulnerable to the disease than people over 65 (although they’re still vulnerable). The group is also more conservative than people under 40. Its members came of age during Jimmy Carter’s unsuccessful presidency, Ronald Reagan’s two terms in office and the U.S. triumph in the Cold War. My colleague (and fellow Generation Xer) Ross Douthat goes into more depth on conservative Xers here.

But winning only a couple of slices of the country’s age spectrum isn’t enough to win a presidential election. The CNN and NBC polls both showed Trump trailing by double digits nationwide. New polls yesterday showed him losing in Arizona, Florida, Michigan, North Carolina, Pennsylvania and Wisconsin.

Trump keeps telling people that the virus is not as bad as they’ve heard. Older Americans aren’t buying it.

Related: Wasserman, one of the best political analysts there is, has written a Times Op-ed on the 10 bellwether counties that highlight Trump’s political problems.

Top U.S. military leaders — including the chairman of the Joint Chiefs of Staff — went into quarantine after a senior Coast Guard official tested positive for the virus. The official, Adm. Charles Ray, had attended a White House reception with Trump 10 days ago, where people sat close together and without masks.

Four more Trump administration officials tested positive, including Stephen Miller, a top adviser. Inside the White House, the West Wing was mostly empty, with many staff members out sick or working from home.

The White House reversed course and allowed the release of new safety guidelines that make it unlikely a vaccine will be authorized by Election Day.

Trump abruptly ended talks with Democrats on an economic stimulus bill. If he sticks to that position, it would extinguish hope for another pandemic aid bill before the election.

Vice President Mike Pence and Senator Kamala Harris are set to debate tonight in Salt Lake City. You can watch on The Times’s website, with real-time analysis from our reporters, and sign up for live election updates including highlights from the debate.

Tonight’s debate will feature more virus protections than the last one: Harris and Pence will sit at tables spaced 12 feet apart, with each candidate behind a plexiglass barrier and all audience members required to wear masks.

Biden cast the nation as a “house divided” and urged unity during a speech in Gettysburg, Pa. “We are facing too many crises, we have too much work to do, we have too bright a future to have it shipwrecked on the shoals of anger and hate and division,” he said.

Daily polling diary: Until recently, Biden wasn’t polling as well in Pennsylvania as he was in Wisconsin and Michigan. But six recent, high-quality polls have shown Biden up by at least seven points in Pennsylvania.

Former Attorney General Jeff Sessions and his deputy, Rod Rosenstein, were “a driving force” behind Trump’s child separation policy, according to a draft report by the Justice Department’s inspector general. “We need to take away children,” Sessions told state officials.

Hurricane Delta is barreling toward Mexico and could produce a “life-threatening” storm surge along portions of the Yucatán Peninsula, the U.S. National Hurricane Center said. The storm could approach the northern Gulf Coast later this week.

Facing criticism that it hasn’t done enough to curb the far-right conspiracy theory QAnon, Facebook said it would remove any group, page or Instagram account openly identified with the group.

Two scientists, one from France and one from the U.S., were awarded the Nobel Prize in Chemistry. They discovered a tool that allows researchers to change the DNA of animals, plants and microorganisms with high precision.

A neo-fascist party in Greece, Golden Dawn, was found guilty of running a criminal organization. A criminal court tied the party to multiple attacks, including the fatal stabbing of a left-wing rapper in 2013.

Kyrgyzstan descended into political chaos after opposition groups seized physical control of Parliament in protest of elections they say were rigged.

The Seattle Storm won the W.N.B.A championship, the franchise’s fourth, tying it with Houston and Minnesota for the most.

A Morning read: The trees in Eastern U.S. forests are dying. Rising temperatures, changing season length, extreme weather — all various manifestations of climate change — are taking a toll on the woodlands. It’s driving a demand for arborists, otherwise known as tree doctors.

Lives Lived: Eddie Van Halen’s hyperactive riffs and solos made him one of rock’s most influential guitarists, and paired perfectly with the hedonistic persona of his band, Van Halen. “He also scared the hell out of a million guitarists because he was so damn good,” the guitar player Joe Satriani said. Van Halen died Tuesday at 65.

IDEA OF THE DAY: The green wave

Four more states — New Jersey, Arizona, Montana and South Dakota — may legalize marijuana this year through ballot initiatives. If they do, it would mean that one in three Americans lived in a state with where recreational marijuana is legal. It’s already legal in 11 states.

The change has been rapid. A decade ago, not a single state allowed recreational marijuana, and most Americans opposed it, polls showed. Today, 67 percent support legalization, according to a recent Pew poll.

What explains the shift? Some supporters of legalization point to changing opinions about criminal justice: Most Americans now oppose harsh sentences for drug offenses. Changing media coverage may also play a role: A recent study examined New York Times articles about marijuana from the 1980s through the 2010s and found that the focus had shifted from drug trafficking and abuse to medical use and politics.

“Gradually,” the study’s authors wrote, “the stereotypical persona of the marijuana user shifted from the stoned slacker wanting to get high to the aging boomer seeking pain relief.”

Spruce up roasted chicken thighs with the zesty flavors of lemon, ginger and jalapeño. For extra crispy chicken skin, place the meat under the broiler for a few minutes after roasting. This recipe works well with chicken breasts, too.

If you’ve heard any new songs from the past three decades, you have probably heard part of the James Brown track “Funky Drummer,” which includes one of the most sampled breakbeats. It’s also extremely difficult to play.

Dylan Wissing, a drummer with credits on songs by Kanye West and Drake, is renowned for re-enacting famous rhythms. But there is one he hasn’t been able to crack yet: “Funky Drummer.” “It’s my Moby-Dick, my Mona Lisa, my Mount Everest,” he said.

The author Tana French doesn’t write genre books or thrillers. Instead, she writes “full-bodied novels in which crimes happen to have been committed,” Janet Maslin writes in a review of French’s latest work, “The Searcher.” The book revolves around Cal Hooper, a retired policeman who moves to western Ireland. After a local boy goes missing, mystery ensures.

If you want to brush up before digging into her latest, here’s a guide to French’s best works.

Take a break and listen to five minutes that will make you love Baroque music.

The late-night hosts responded to Trump’s condition after he said that he might be immune to the virus.

P.S. The latest edition of “The Best American Sports Writing,” an annual book, will include articles by The Times’s Andrew Keh and Kurt Streeter. Andrew’s piece is about a Paralympic athlete who chose to die by euthanasia; Kurt’s is about the renaming of a Virginia thoroughfare after Arthur Ashe.

Today’s episode of “The Daily” is about the state of the coronavirus in the U.S. On the latest “Popcast,” a conversation about Luke Combs’s post-bro country music stardom.

Ian Prasad Philbrick, Sanam Yar and Claire Moses contributed to The Morning. You can reach the team at [email protected].