Good morning. Congressional Republicans say they will respect election results. The Pac-12 will play football. And you can expect a heated debate over “judicial supremacy.” 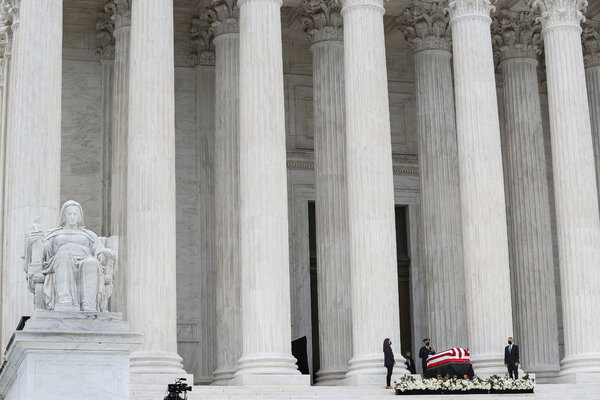 The idea of an all-powerful Supreme Court — a court where justices with lifetime tenure have ultimate authority to resolve society’s toughest questions — has come to seem normal in today’s United States.

It’s not normal anywhere else. In no other democracy do judges serve for as long as they like. In most other democracies, the highest courts are less aggressive about striking down entire laws, as Jamal Greene of Columbia Law School told me. The courts instead tend to direct legislators to fix specific parts of a law.

An all-powerful Supreme Court has also not been constant in American history, largely because the Constitution does not establish it. The balance of power between the judiciary and the other branches of government has oscillated. The past two decades, when the court has intervened to decide an election, legalize same-sex marriage and throw out multiple laws, represent a high point for what scholars call “judicial supremacy.”

All of which suggests that the future of the Supreme Court does not depend only on who the justices are. It also depends on whether future presidents and Congresses choose to accept judicial supremacy.

The death of Ruth Bader Ginsburg has moved that question to the center of American politics.

The Constitution certainly gives Congress and the president ways to reclaim authority. Jamelle Bouie, a Times Opinion columnist, has explained how Thomas Jefferson and Abraham Lincoln both fought their political opponents’ attempts to lock in power through the courts.

“If the policy of the Government upon the vital questions affecting the whole people is to be irrevocably fixed by the decisions of the Supreme Court,” Lincoln said in his first inaugural address, “the people will have ceased to be their own rulers.”

In recent years, conservatives were often the ones criticizing judicial supremacy, especially after Roe v. Wade restricted voters’ ability to decide abortion policy. Today, liberals are alarmed: The Republican Party, despite having lost the popular vote in six of the last seven presidential elections, may use the judiciary to dictate policy on climate change, voting rights, economic inequality and more, for decades to come.

The option for Democrats that has received the most attention is an expansion of the number of justices. But there are other options that seem less radical, Richard Pildes of New York University notes. Democrats could also pass a law restricting the court from reviewing some areas of the law — a power that the Constitution explicitly gives Congress. Or Congress could pass a law requiring six or seven justices’ votes for any decision striking down federal or state laws.

If Democrats choose any of these options, Republicans may retaliate in the future, setting off a destabilizing political arms race. On the other hand, the acceptance of judicial supremacy brings big downsides, as well. It may be tantamount to forfeiting political power for the majority of Americans.

“If protecting the right of the people to govern for themselves means curbing judicial power and the Supreme Court’s claim to judicial supremacy, then Democrats should act without hesitation,” Jamelle argues. “If anything, they’ll be in good historical company.” Of course, it’s all academic if Democrats don’t win the White House and both houses of Congress.

Other ideas: The historian Julian Zelizer has made the case against court expansion. The Economist magazine favors term limits for justices (which may require a constitutional amendment), and Maya Sen of Harvard has summarized the arguments for term limits.

Senate Republicans spent much of the day affirming that they would support a peaceful transition if Joe Biden wins the presidential election. The comments contradicted President Trump, who declined for a second straight day to commit to a peaceful transfer of power if he lost.

How to vote: The Times created an interactive guide to help you register and cast your ballot.

The latest polls: Most new polls yesterday showed a stable race, with Biden generally holding narrow leads in the crucial swing states. But one set of polls, from Fox News, was better for Biden, finding him ahead by seven percentage points in Pennsylvania — and even ahead by five points in Ohio. Every day, The Times’s Nate Cohn explains the latest polls here.

The situation was mostly calm last night in Louisville, Ky., although there was some window-breaking, the day after a grand jury declined to charge police officers with killing Breonna Taylor. Earlier yesterday, authorities charged Larynzo Johnson, 26, with shooting two police officers during protests on Wednesday night. The two officers survived.

Even as coronavirus cases spike across much of Europe, hospitalizations are not rising much in some countries. It’s possible that they may begin rising soon. But some experts argue that the virus has lost potency since it first arrived in Europe, or that it is now infecting mostly younger people, who are less likely to experience severe symptoms.

In other virus developments:

The Pac-12 Conference — home to Oregon, Stanford and U.C.L.A. — announced it would resume its college football season in November. All of the sport’s major conferences now plan to play this year.

Tens of thousands of demonstrators have gathered for a series of pro-democracy protests in Thailand in recent weeks, their ranks dominated by an emerging political force in the country: young women.

A federal judge barred the Trump administration from ending the 2020 census a month early, after evidence showed that top Census Bureau officials believed doing so would endanger its accuracy.

North Korea’s leader, Kim Jong-un, offered a rare apology today for the killing of a South Korean official by soldiers from the North. The victim was apparently trying to defect to the North.

Google users, especially in the Eastern U.S., experienced a service disruption for more than an hour last night, affecting email, YouTube and more.

France will double paid paternity leave to 28 days starting next summer and will require new fathers to take at least a week off work.

More Americans applied for state unemployment benefits last week than the week before, a sign of economic weakness.

Lives Lived: Henry van Ameringen, a philanthropist and heir to a family fortune in the fragrance industry, was among the first openly gay major donors to fund L.G.B.T.Q. and AIDS-related organizations, at a time before they enjoyed more mainstream support. He died at 89.

The apartments just beyond the bleachers at Wrigley Field. The hotel with windows that overlook the Toronto Blue Jays’ outfield. The fences around many Major League Baseball parks that allow a small view of the field.

Fans have long had options for stealing glimpses at ballgames without buying tickets. But in this pandemic season, those options have become virtually the only way a fan can watch a game in person. No team is selling tickets.

Tyler Kepner of The Times has written an introduction to a photo essay called “Pandemic-Obstructed Views,” which shows how fans are getting creative this season. It’s not just baseball, either. Golf and tennis fans have also stolen looks at their sport in recent weeks.

This baked risotto comes together quickly and is chock-full of leafy greens like kale and spinach. Try topping it with sautéed mushrooms, a fried egg or crisped tofu slices to turn it into a more filling meal.

The platform Cameo, which lets users buy personalized video messages from famous people, has become more popular during the pandemic. Now, more mainstream stars, like Snoop Dogg and Tiffany Haddish, are signing on to the space. “Once, it was thought unseemly for a celebrity to make herself available to her fans directly, and in her free time,” Naomi Fry writes in The New Yorker, in a fascinating essay examining Cameo’s rise. But today it’s become just another branding exercise.

“Performers can be straightforward about the fact that they are exchanging their attention for money,” Fry writes.

Our weekly suggestion from Gilbert Cruz, The Times’s Culture editor:

It’s been six years since the director David Fincher last released a movie. This fall will bring us “Mank,” his film about the screenwriter Herman J. Mankiewicz and the making of “Citizen Kane.”

Ten years ago, though, Fincher directed a movie about a different sort of genius — one whose creation is now seen by some as a sort of Frankenstein’s monster. “The Social Network” (which expires from Netflix in the U.S. at the end of the month) presents a not particularly factual but absolutely compelling account of the founding of Facebook.

With a script by Aaron Sorkin, Jesse Eisenberg’s perfectly unlikable performance as Mark Zuckerberg and a chilly style that matches the faux-humanity of modern tech-culture, it’s one of the decade’s best American films.

David Attenborough, who has worked on some of the greatest nature documentaries, joined Instagram yesterday with a warning: “The world is in trouble.” He also set a record, becoming the user who reached one million followers the fastest.

The late-night comedy hosts worried about Trump’s refusal to say he would step down if he lost the election.

Here’s today’s Mini Crossword, and a clue: What there’s no accounting for, they say (five letters).

Or try this week’s news quiz.

Thanks for spending part of your morning with The Times. See you on Monday. — David

P.S. Ephrat Livni — who has previously worked as an attorney, an English teacher, a street artist and a reporter covering the Supreme Court — has joined The Times to cover business, policy and the law from Washington.

Today’s episode of “The Daily” is about police reform in Minneapolis. On “The Argument,” Opinion writers debate the future of the Supreme Court.

Ian Prasad Philbrick and Sanam Yar contributed to The Morning. You can reach the team at [email protected].