Here’s a simple way to understand the recent rise in inflation: As the pandemic is receding in the U.S., demand for goods and services is rebounding more quickly than the supply of those same goods and services. And when demand outpaces supply, prices rise.

The demand part of the story is fairly obvious. More Americans are shopping in stores, eating in restaurants and planning vacations. They are spending some of the savings that they accumulated during the pandemic, including money from government stimulus checks. As my colleague Neil Irwin says, “Demand is not just back but more than back, given the fiscal surge and pent-up savings.”

Supply, however, is not back. The pandemic disrupted supply chains for many items, including computer chips, paint, lumber and sneakers. It also disrupted work habits, and not everybody can — or wants to — return immediately to their old jobs.

The taxi and ride-hailing industry is a good example of what happens when rising demand (more travelers) runs up against reduced supply (a shortage of drivers). One rider recently paid $248 for a trip from Midtown Manhattan to Kennedy International Airport, in Queens — almost as much as his plane ticket to California. 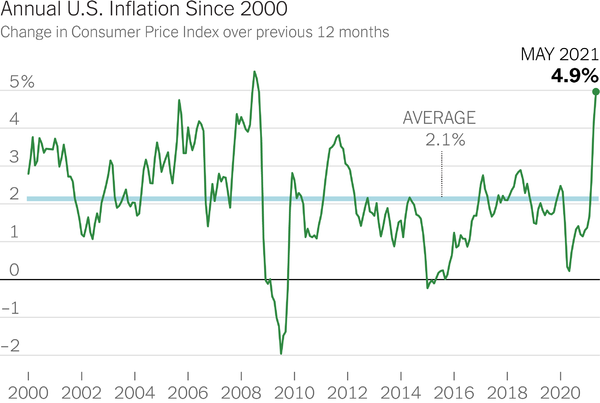 “Inflation has come in above expectations,” Jerome Powell, the chairman of the Federal Reserve, said after a meeting yesterday. During the meeting, Fed officials updated their inflation forecast, predicted that inflation would remain above 3 percent for much of this year, which is higher than their preferred level of 2 percent. Fed officials also announced that they expected to begin raising interest rates in 2023, sooner than previously planned, as The Times’s Jeanna Smialek explains.

The big question is whether the forces causing inflation to rise are fleeting, as Powell believes is quite likely — or whether they will continue for months and create significant problems for the U.S. economy. Today’s newsletter lays out those two different scenarios.

There are some reasons to believe that the mismatch between demand and supply could last for a while.

On the demand side, Americans have money to spend, thanks partly to all the stimulus that the government has pumped into the economy. Look at what’s happened over the past year to the savings rate, which measures the portion of income that households put aside each month:

“With excess saving they can afford more of everything,” Jason Furman, a Harvard economist and former Obama administration official, wrote this week.

Although companies are increasing the supply of many products to satisfy rising demand, they may not always be able to keep up. One unknown, as Neil points out, is how many people have decided that they prefer the slower pace of pandemic life and choose not to return to full-time work. A lower labor supply could lead to more competition for workers and to wage increases that would translate into price increases.

If inflation remains elevated for months, it could feed on itself. Companies would increase prices, to cover the higher cost of raw materials. Workers would ask for wage increases, to maintain their buying power. The Federal Reserve might then need to raise interest rates to prevent an inflationary spiral, and rapid rate increase has caused recessions in the past.

Furman has called the chances of persistent inflation “under appreciated.”

But you can also tell a plausible story about why inflation won’t last. This is the scenario that most officials at the Fed and in the Biden administration consider to be more likely.

One reason to be skeptical about dire inflation warnings is that economists have repeatedly overestimated the risks of inflation in the 21st century. And several features of the modern American economy seem to restrain inflation. Global competition is one, Powell has argued. Another is American workers’ relative lack of bargaining power, which means that companies can often wait out temporary price spikes without increasing wages.

Fed officials believe that these larger forces will prove more powerful than the short-term disruptions from the economy’s post-pandemic reopening. (Neil has written a helpful explainer on this subject.)

Already, there is some evidence to support the Fed’s sanguine view. Some companies have responded to higher prices, and to the opportunity to make higher profits, by increasing output. To take one example, lumber prices, after rising sharply, are now falling. “As the economy is opening back up again, prices are now moving back toward normal levels in leisure, hospitality, airfare and the like,” Janet Yellen, the Treasury secretary, said in a Senate hearing yesterday.

The coming end to federal stimulus will also serve to reduce demand. The spending from the $1.9 trillion bill that President Biden signed in March will mostly expire by early summer. Once that happens, the decline in government spending will act as a drag on economic growth and help hold down inflation.

It’s too soon to know which scenario will be closer to reality. Regardless, it’s worth remembering that inflation is not the only way to measure the U.S. economy.

The best outcome for most Americans is a growing economy in which incomes are increasing faster than prices, leading to broadly rising living standards. Stable inflation almost certainly needs to be a part of that happy outcome. But it is not enough. An economy with low inflation and weak income growth — which is to say, the U.S. economy for most of the past few decades — has its own problems.

Officials at the Fed and the Biden administration are trying to create a stronger economy without also causing a different set of problems. We don’t yet know whether they will succeed.

The conversation was cordial, and they agreed to return ambassadors to each other’s capitals, but they made little progress in disputes over cyberattacks and other issues.

Afterward, Putin described Biden as a “very balanced, professional man.” Biden said of Putin: “I think the last thing he wants now is a Cold War.”

Senator Joe Manchin said he supported several key pieces of a voting-rights bill, including a ban on partisan gerrymandering.

The Justice Department made it easier for migrants fleeing violence to seek asylum in the U.S., ending a Trump-era policy.

In another reversal, the Education Department said that Title IX anti-discrimination protection applies to transgender students.

A Covid vaccine developed by the German company CureVac performed poorly in a clinical trial.

With five weeks to go until the Olympics, Japan said it would ease its state of emergency.

A drought and a climate change-fueled heat wave are broiling the American West.

The police in Hong Kong arrested top editors at a pro-democracy newspaper and raided its newsroom.

Union employees at The New Yorker and two other publications reached a deal for better wages and health benefits.

The Democratic candidates for mayor of New York City held their final debate before next week’s primary. (Times Opinion ranked their performances.)

Three Chinese astronauts docked in space to help build a rival to the International Space Station.

“Ambivalence and ambiguity aren’t necessarily signs of weakness or sins of indecision. They can be apt responses to events that we don’t yet understand,” Frank Bruni writes in his last regular Times Opinion column. (His weekly newsletter will continue).

Making it: What happens after a band wins Eurovision?

Rebrand: Victoria’s Secret will swap Angels for “what women want.”

A Times classic: Can you spot the soccer ball in these photos?

Lives Lived: Brigitte Gerney became known as the “Crane Lady” after a collapsed crane in Manhattan trapped her for six hours in 1985, crushing her legs. She survived and, miraculously, walked again. Gerney died at 85.

It began with a simple question: “Y’all wanna hear a story about why me & this b-tch here fell out???????? It’s kind of long but full of suspense.”

What followed were 147 tweets recounting a Florida road trip that turned sinister. It was a tale that involved stripping, betrayal, shootouts and a pimp. A’Ziah-Monae King — who also goes by Zola — wrote the story based on her own experience, though she embellished some details. Celebrities like Missy Elliott and Ava DuVernay remarked on how captivating it was; Rolling Stone dubbed it “the greatest stripper saga ever tweeted.”

“On the surface, Zola’s story may have seemed like an outlandish caper, but the real narrative engine was a Black woman using her wiles to narrowly escape exploitation,” Jenna Wortham writes in The Times. “Zola carefully layered the violence and entertainment.”

Hollywood snapped up the story for a movie adaptation. It comes out at the end of this month.

Check out new and noteworthy titles, including a book on Edgar Allan Poe’s fascination with science.

The hosts talked about the Biden-Putin meeting.

The pangram from yesterday’s Spelling Bee was acridity. Here is today’s puzzle — or you can play online.

P.S. The Statue of Liberty arrived in New York Harbor 136 years ago today. Packed below decks in 212 boxes, “the eyes and nose filled one crate, the forehead another, an ear and part of the crown another,” The Times reported.

“The Daily” is about Gov. Ralph Northam of Virginia. On the Modern Love podcast, are our love lives predetermined?