We start today with deadly storms in the Southeast, a crucial vote to oppose President Trump’s national emergency declaration, and a potential deal in trade negotiations with China. 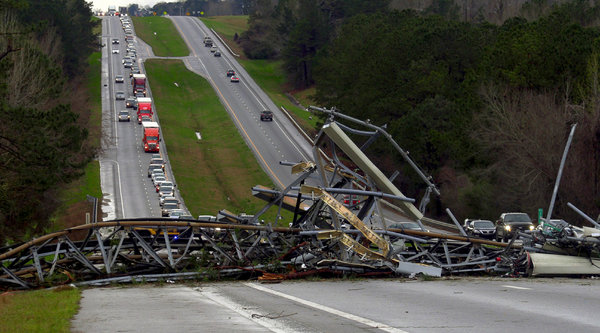 Tornadoes kill at least 23 in Alabama

A cluster of storms ripped through the Southeast on Sunday, leaving a trail of destruction that stretched into Florida and Georgia.

All of the reported deaths in Alabama were in Lee County, on the border with Georgia, where two tornadoes touched down.

Related: Intense cold weather in the Rockies and Midwest is expected to spread east today, and one meteorologist warned of an “all-week cold snap” for much of the country. Schools were closed in New York City, where a storm that had been expected to dump 10 inches of snow overnight had moved out by early this morning. Here’s the latest.

Sexual violence on the border

On the U.S. border with Mexico, migrant women and girls are often the victims of sexual assaults that go unreported, uninvestigated and unprosecuted. Their attackers often threaten to expose their immigration status — or worse — if they report an assault.

President Trump has used the violence to make his case for a border wall. The Times spoke with eight women from Central America who were sexually assaulted between 2013 and 2016 about their experiences.

Yesterday: Senator Rand Paul of Kentucky said he would support a resolution to block Mr. Trump’s attempt to use emergency powers to fund a border wall. Mr. Paul became the fourth Republican senator to back the measure, appearing to give it the necessary support to pass. Mr. Trump has said he would veto it.

From The Times: Our new email newsletter, Crossing the Border, brings you the stories of some of the millions who live along the border. Read the latest one and sign up.

More than 440 rural nursing homes have closed or merged in the past decade, according to a group that tracks long-term care. But instead of finding new care in their communities, many patients go to different homes far from their families.

Some facilities were forced to close after failing to meet health and safety standards, but far more have collapsed for financial reasons, including health care policies that encourage people to choose independent and assisted living or to stay in their own homes with help from caregivers.

Quotable: “How often have you heard somebody say, ‘If I go to a nursing home, just shoot me?’” said Stephen Monroe, a researcher who tracks aging in America. “In the rural areas, you don’t have options.”

A test for India’s military

The challenges faced by the country’s armed forces were evident after one of its aging aircraft was shot down by Pakistan last week. A majority of the Indian Army’s equipment is so old that it’s officially “vintage.”

The U.S. has been determined to strengthen its alliance with India to counter China’s regional ambitions. But officials in New Delhi say it’s difficult to funnel money toward the military when they are struggling to improve citizens’ lives in the most basic of ways.

Catch up: Several civilians were killed over the weekend during intense shelling along the disputed border between India and Pakistan. The violence came after Pakistan handed over a captured Indian pilot on Friday.

Perspective: The author of a memoir about the conflict in Kashmir argues in an Op-Ed that India and Pakistan share responsibility for reducing the region to a ruin.

If you have 11 minutes, this is worth it

In 2007, Amazon started spending to build a TV and film portfolio, and Mr. Bezos, its founder, became a powerful presence on the red carpet. Eventually, he and the Hollywood insider Lauren Sanchez, pictured with him above, began an affair that splashed over The National Enquirer.

Now, he has effectively ceded control of his narrative to two feuding figures who are prolonging the scandal’s news value: his A-list security consultant and Ms. Sanchez’s fame-hungry brother-manager.

U.S.-China trade talks: An agreement that would roll back tariffs on both sides may do little to achieve the substantive changes to China’s economy that the Trump administration initially sought, according to people with knowledge of the talks.

Awaiting a return to Caracas: Juan Guaidó plans to re-enter Venezuela today after leaving more than a week ago to rally support for his efforts to oust President Nicolás Maduro. Mr. Guaidó risks being arrested, but his absence has sapped the momentum of his opposition movement.

Trump at CPAC: President Trump said on Saturday that he planned to issue an executive order that would help guarantee free speech at colleges and universities. He made the remarks at the annual Conservative Political Action Conference, and we fact-checked his speech.

The 2020 election: John Hickenlooper, the former governor of Colorado known for being socially progressive and pro-business, today became the latest Democrat to launch a presidential campaign.

No charges in Sacramento shooting: Two police officers who shot and killed an unarmed black man in his grandmother’s backyard last year will not face criminal prosecution. The death of Stephon Clark touched off waves of protests.

Snapshot: Above, Carnival celebrations on Sunday at the Sambódromo, a purpose-built stadium in Rio de Janeiro where thousands of performers appear each year.

What we’re reading: This essay in the London Review of Books. Michael Roston, an editor on the Science desk, writes: “‘Finally reached the end of the internet,’ goes a joke once told about being online too much. This article by Patricia Lockwood, the poet, memoirist and all-around interesting thinker, is kind of about an end of the internet. I’ll only ruin it if I try to say more.”

Watch: “Barry” and “Russian Doll” are among the new TV shows that try to re-instill basic lessons in human decency.

See: Jasper Johns’s latest show, “Recent Paintings & Works on Paper,” at Matthew Marks Gallery in Manhattan, is optimistic, despite concluding with a room full of skeletons.

Listen: Adia Victoria, a 32-year-old songwriter who grew up in South Carolina, likes to call herself a “modern blues woman.”

Smarter Living: If you’re supporting a loved one who is a survivor of sexual abuse or assault, it’s best to simply listen, not to pressure them into telling their story. Let them know that you’re open to hearing whatever they want to share, and above all that you believe them.

We also have guidance on becoming a “digital nomad,” earning a living while seeing the world.

On Tuesday, the end of the women’s ready-to-wear season in Paris, the last of Karl Lagerfeld’s enormous sets for Chanel will be revealed — the final gesture of a man who shaped fashion as we know it. He died on Feb. 19.

Though many designers have created dramatic shows — most notably Alexander McQueen, John Galliano and Thom Browne — none reached the extremes of Mr. Lagerfeld. He once imported (and then returned) a Swedish iceberg, had a rocket launch and created a sandy beach with real surf — all within the glass-roofed confines of the Grand Palais in Paris.

Though I was never as big a fan of these fantasy moments as many of my peers (I believed the money could be better spent elsewhere, like on a charitable foundation), they were the markers of a time that is coming to a close, symbols of a vision that bridged the couture and Instagram eras.

Get ready for the farewell hurrah. Given that Mr. Lagerfeld never did anything by half measures, it is bound to be a doozy.

We end with the latest installment of the Times’s copy editing quiz. Because nothing says Monday morning like a grammar test.

See you next time.

Thank you
To Eleanor Stanford and James K. Williamson for the break from the news. Vanessa Friedman, the chief fashion critic at The Times, wrote today’s Back Story. Follow her on Twitter for live updates from this week’s show. You can reach the team at [email protected]

P.S.
• We’re listening to “The Daily.” Today’s episode is about what to expect as the special counsel, Robert Mueller, prepares to submit his report.
• Here’s today’s mini crossword puzzle, and a clue: Kind of bean mentioned by Hannibal Lecter (4 letters). You can find all our puzzles here.
• The New York Times has been publishing T, a fashion and design magazine, since 2004. @tmagazine has 796,000 followers on Instagram.

Chris Stanford is based in London and writes the U.S. version of the Morning Briefing. He also compiles a weekly news quiz. He was previously a producer for the desktop home page and mobile site, helping to present The New York Times’s news report to readers. Before joining The Times in 2013, he was an editor and designer at The Washington Post and other news organizations. @stanfordc