Good morning. Trump leaves the hospital, but only briefly. He is taking a medicine used in severe cases. And many Americans are wondering why pandemic rules don’t apply to everyone. 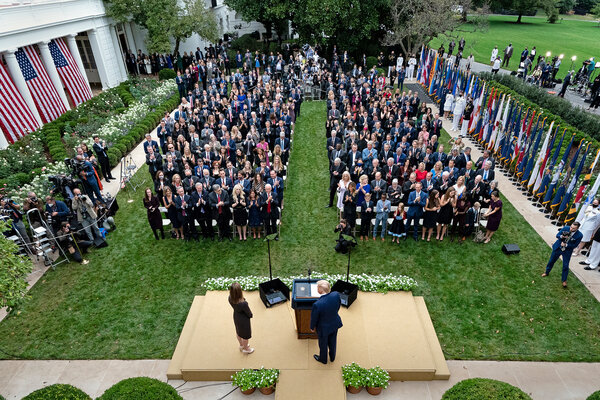 The sacrifices of many

Millions of Americans have gone months without seeing some of their closest relatives or their colleagues. They have canceled weddings and graduations. They have said goodbye to dying loved ones by phone.

But when many of the nation’s political leaders gathered at the White House nine days ago to celebrate the Supreme Court nomination of Amy Coney Barrett, they decided the pandemic rules that applied to everybody else didn’t apply to them.

Some of them assumed, wrongly, that because they had received a fast-response virus test when arriving at the White House, they could not be infectious. Others simply chose not to think about the virus, it seems. Instead, dozens of them sat, unmasked, within inches of one another. They shook hands, hugged and kissed. After starting outdoors, the event moved indoors, where the participants continued to celebrate like it was 2019.

There is now reason to believe that the gathering was a superspreader event for the coronavirus. The president and the first lady are sick, as are two senators who attended, a former governor, the president of the University of Notre Dame and multiple White House staff members, journalists and others.

And anyone infected at the White House that day may have later infected others.

Andrew Joseph of the health publication Stat wrote this weekend that the event at the White House “offers a case study in what experts say has been the administration’s recklessness.” The Times has compiled photos from the event, with labels identifying many of the attendees.

Rebecca Ruiz of Mashable tweeted, in response to a photo of the indoor reception for Barrett: “I haven’t hugged my parents since March 8 and they haven’t hugged their grandchildren since then either. 6yo desperately wanted to hold hands w/ her grandpa on her birthday and I said no, we can’t take that risk.”

David French of the conservative website The Dispatch, wrote, “What a breathtaking contrast to the way so many millions of Americans have lived their lives.”

Perhaps the most poignant response came from, the Notre Dame president, the Rev. John Jenkins. This spring, Jenkins had made the case that colleges had a moral obligation to reopen, for the sake of the “body, mind and spirit” of their students. But Notre Dame would do so carefully, he promised. When some students violated campus rules by holding parties — without masks or social distancing — and a virus outbreak followed, Jenkins canceled in-person classes for two weeks as a punishment and a precaution.

Early last week, even before it was clear that the White House helped spread the virus, Jenkins wrote a letter to the Notre Dame community expressing regret for his behavior there. “I failed to lead by example, at a time when I’ve asked everyone else in the Notre Dame community to do so,” he wrote. “I especially regret my mistake in light of the sacrifices made on a daily basis by many.”

President Trump’s doctors acknowledged Sunday that his condition was more serious than they had publicly described on Saturday. Dr. Sean Conley, the White House physician, suggested he had given the rosy assessment to avoid upsetting Trump.

Trump did not disclose to the country the first positive virus test result he received, The Wall Street Journal reported. That first positive test came Thursday during the day. He appeared on Fox News that night and said he was awaiting his test result, which was in fact a follow-up test.

Trump’s doctors are treating him with dexamethasone, a steroid that has helped severely ill patients, but not typically used in milder cases. Outside health experts said they could not tell if Trump was sicker than he appeared in photos — or if doctors were treating him with unusual aggressiveness.

Dexamethasone can cause side effects, including confusion, sleep loss and changes in mood and cognition, raising concerns about whether the president’s treatment may affect his ability to do his job.

Trump briefly left the hospital in an S.U.V. to wave at supporters, potentially putting at risk of infection the two Secret Service agents who were also in the car. “The irresponsibility is astounding,” Dr. James Philips, an attending physician at the hospital where Trump is being treated, tweeted.

Joe Biden’s campaign said he had tested negative for the virus again, five days after sharing a debate stage with the president. Biden will campaign today in Florida, despite public health guidelines calling for a 14-day quarantine after potential exposure. His campaign said he did not need to because he did not have “close contact” with Trump.

Activists and celebrities have poured millions of dollars into paying off former felons’ court fees in Florida so that they can register to vote in the key battleground state.

Nate Cohn’s polling diary: Trump seems unlikely to benefit politically from his diagnosis, polls suggest. In one, from Reuters/Ipsos, 65 percent of Americans said he probably would not have been infected had he taken the virus more seriously.

Gay men seized the hashtag #ProudBoys by posting uplifting photos of themselves. The Proud Boys are a far-right political group that is sympathetic to white supremacy and that Trump has been reluctant to condemn.

The three scientists — two from the U.S. and one from Britain — who discovered the hepatitis C virus won this year’s Nobel Prize in Medicine.

Thomas Jefferson Byrd, 70, a Tony-nominated actor known for roles in various Spike Lee films, was found shot to death in Atlanta on Saturday, the authorities said.

The media column: John Bresnahan of Politico “has become Capitol Hill’s grim reaper, a rare reporter with the stomach to print some obvious truths: that some top lawmakers aren’t all there,” writes Ben Smith, The Times’s media columnist, while asking how journalists should cover old or ill politicians.

A morning read: Tidjane Thiam did the job he was hired to do: He made Credit Suisse profitable again. But as the only Black chief executive in the industry, he never had to stop fighting for acceptance, both within the bank and in Switzerland generally. Then a scandal ended his tenure.

Lives Lived: He was so dominant in 1968 — posting an earned run average that remains the lowest of the past century — that Major League Baseball lowered the height of the pitcher’s mound the next season. And he was at his best in the World Series. “My thing was winning,” Pack Robert Gibson, who was known as Bob, said after his retirement. Gibson died Friday at age 84.

IDEA OF THE DAY: Closed borders

Many Americans recoil at the idea of shutting the nation’s borders. It goes against the image of the United States as a country of immigrants. It smacks of nativism and, sometimes, racism.

But the evidence of the last several months suggests there is at least one instance when shutting a country’s borders can doa lot of good: in the early stages of a deadly pandemic.

Australia, New Zealand, Vietnam, Rwanda, Ghana and multiple other countries in Asia and Africa held down their infection rates partly by shutting their borders. Many countries in Europe, North America and South America, however, following the advice of the World Health Organization, kept their borders open — and appear to have suffered for it. (In the U.S., Trump claims that he closed the borders to China and Europe, but he did not.)

“For decades, as trade and travel drew the world closer, public health policy, enshrined by treaty, encouraged global mass tourism by calling for open borders, even during outbreaks,” a team of Times reporters — Selam Gebrekidan, Katrin Bennhold, Matt Apuzzo and David Kirkpatrick — have written. “But what is now clear is that the policy was about politics and economics more than public health.”

Seared gnocchi (store bought) and sautéed brussels sprouts make for a delicious meal that comes together in under half an hour. Tossed with lemon zest, red-pepper flakes and brown butter, there’s no shortage of flavor.

In the Florida Everglades, Burmese pythons up to 20 feet long can swallow bobcats whole. Sea lampreys suck the blood out of fish in the Great Lakes. And wild boars stir trouble in city streets from Berlin to Hong Kong. All of these are examples of invasive species.

One way to control their numbers: Cook them for dinner. There are annual invasive-species-themed cook-offs, fund-raisers and feral-hog roasts, framing what might otherwise be seen as an offbeat food choice into “a civic duty, a heroic act, even a declaration of war,” writes Ligaya Mishan in T Magazine.

In HBO’s mini-series “The Undoing,” a psychological thriller that premieres this month, Nicole Kidman plays a Manhattan therapist whose impeccably ordered life is suddenly shattered by violence and lust. It’s a type she’s played time and time again. “I’ve fought that emotional intensity at times and tried to protect myself from it,” Kidman said in a new interview. “Now I’m at the point where I’m like, no. Digest it. Maybe don’t even understand it. But always have it flow.”

Here are nine new songs to kick off your week, including tracks by Maren Morris and Jorja Smith.

“Saturday Night Live” returned with its first live show in more than six months. Chris Rock hosted and Jim Carrey made his debut as Joe Biden.

P.S. A haiku from a recent Times article (courtesy of the Twitter bot @nythaikus): “So I will have a/chocolate and I will be/better tomorrow.”

Today’s episode of “The Daily” is about Trump’s health. On the latest “Sway,” Kara Swisher interviews Dr. Moncef Slaoui of the government’s coronavirus vaccine project.

Ian Prasad Philbrick and Sanam Yar contributed to The Morning. You can reach the team at [email protected].