Good morning. The vaccine news is good, but the short term will probably depend on state policies. 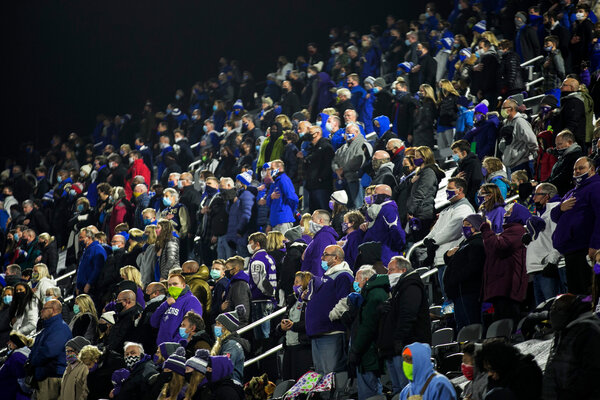 Whenever I visited my local coffee shop this summer, it did not allow any customers inside. I ordered a cup from a worker standing at a table blocking the front door and came back a few minutes later to pick it up.

In recent weeks, though, the shop’s setup has changed. I now walk inside and order. Often, there are a few other customers lingering nearby, waiting for their coffee.

Nationwide, there are many other versions of this story. Professional sports leagues, for example, weren’t allowing any fans in the stands for much of the summer. This weekend, thousands of people attended college and pro football games.

From a public-health perspective, these changes don’t make a whole lot of sense: Pandemic restrictions across the U.S. are now less stringent than they were in the summer even though the infection rate is much higher.

How did this happen? State and local governments loosened their policies as the virus receded in August and September — but then left those looser rules in place. (And the federal government has shown little leadership.)

Perhaps the No. 1 question about the pandemic in coming weeks is how aggressively state and local governments reinstate restrictions.

“With the level of community spread we have in Michigan and that many other states are now facing, the only way to bring Covid down is state action — or a terrible loss of life,” Robert Gordon, the director of the Michigan Department of Health and Human Services, told me yesterday.

Several states have announced new steps in the past few days. In Michigan, Gov. Gretchen Whitmer announced the temporary closing of indoor dining, casinos, movie theaters and in-person classes at high schools and colleges. Chicago, Philadelphia and most of California have also reimposed restrictions.

Most of the new restrictions have come from Democratic officials, like Whitmer, but this isn’t a simple partisan issue.

The Republican governors of Iowa and North Dakota have issued mask mandates over the past few days. And in The Wall Street Journal, the Republican health care experts Scott Gottlieb and Mark McClellan wrote an op-ed called “It’s Now Up to Governors to Slow the Spread.” Gottlieb and McClellan wrote: “At least while infections are widespread and surging, governors and local leaders should mandate the use of masks and impose clear and consistent plans to restrict gatherings.”

Still, most states, whether run by Democratic or Republican governors, have resisted taking strict steps, knowing that many Americans are tired of the pandemic. In the meantime, infections keep rising, and deaths have begun rising in recent days, too.

The medium-term future looks ever more optimistic, now that both Moderna and Pfizer have reported encouraging vaccine trials. But the short term will depend to a great degree on what happens in state capitals. For now, many states — like Ohio, New York and New Jersey — are announcing new restrictions that fall well short of what public-health experts say is necessary to crush the spread of the virus.

Moderna’s coronavirus vaccine is 94.5 percent effective, early data shows. It — as well as Pfizer’s vaccine — could receive initial government approval next month, but will probably not be widely available until the spring. Here’s where things stand.

The number of foreign tourists in New York will not likely return to its 2019 level before 2025, according to the city’s tourism promotion agency.

The N.C.A.A. will hold the men’s college basketball tournament next year in just one city, consolidating the normally sprawling event.

President-elect Joe Biden urged Congress to pass a large coronavirus relief package modeled on the $3 trillion Heroes Act that the House passed in May and that then stalled in the Senate.

Biden said that “more people may die” because of President Trump’s refusal to coordinate with Biden’s transition team about vaccine distribution plans. The distribution is likely to begin under Trump and continue under Biden.

People aligned with the Republican Party dropped lawsuits in four states that challenged the integrity of the presidential election. Lawsuits remain active in Michigan, Georgia and Pennsylvania.

Biden is planning to announce some key members of his staff today: Representative Cedric Richmond of Louisiana to oversee public outreach; Jen O’Malley Dillon, who managed Biden’s presidential campaign, as a deputy chief of staff; and Steve Ricchetti, a longtime confidant, as a counselor to the president.

Robert O’Brien, Trump’s national security adviser, acknowledged that Biden appeared to have won the election. “Look, if the Biden-Harris ticket is determined to be the winner — and obviously things look that way now — we’ll have a very professional transition,” O’Brien said last week. (His remarks became public yesterday.)

Brad Raffensperger, Georgia’s Republican secretary of state, told The Washington Post that other Republicans — including Senator Lindsey Graham of South Carolina — pressured him to throw out legally cast ballots to reverse Biden’s narrow win in the state. Graham denied the accusation.

With at least two thirds of a hand recount in Georgia done, local officials said there were no meaningful changes in results.

Hurricane Iota made landfall in Nicaragua battering a region still recovering from Hurricane Eta, which struck less than two weeks ago.

Administration officials expect Trump to order the U.S. military to withdraw thousands of troops from Afghanistan, Iraq and Somalia. Some of his advisers have argued that a rapid withdrawal may destabilize those countries.

The Trump administration said it would sell drilling leases to oil companies for Alaska’s Arctic refuge.

Prosecutors charged Harvard’s former fencing coach with bribery, accusing him of accepting $1.5 million to help a wealthy businessman’s sons get admitted to the university.

Jay Clayton, a former corporate lawyer who has led the Securities and Exchange Commission since 2017, is stepping down as chairman at the end of the year. Clayton tended to favor financial deregulation.

Three Republican senators have said they oppose Trump’s effort to name Judy Shelton, a former economic adviser to the Trump campaign, to the Federal Reserve, complicating the prospects of her confirmation. Lawmakers have been skeptical of Shelton’s unorthodox views on money, her flip-flops on policy positions and her loyalty to Trump.

Sports of the Times: Chris Nikic, 21, is the first person with Down syndrome to complete an Ironman triathlon, offering a lesson in perseverance and hope.

From Opinion: Schools should be the last thing we close amid rising cases, not the first, Dr. Aaron Carroll of Indiana University argues.

Lives Lived: Bruno Barbey believed that photography “is the only language that can be understood anywhere in the world.” In a decades-long career, he covered turmoil in Paris, the Middle East, Poland and Northern Ireland, and everyday life in Italy. Barbey died at 79.

Scarcity as the mother of invention

Jacques Pépin, the chef and cookbook author, grew up in France during World War II, shaped by the scarcity of those years. “I actually feel ill when I see food wasted,” Pépin has written. Much of his subsequent advice to home cooks has revolved around the artful use of available ingredients.

That skill has been especially useful during the pandemic, when many people have had to change their food shopping habits. Earlier this year, as the pandemic started spreading, Pépin began posting Facebook videos that “explained how to cook really well using the simplest and homeliest things you have in your house,” as my colleague Dwight Garner writes.

Dwight continues: “I’ve found many of his videos to be, on certain late insomniac nights, strangely and almost unbearably moving. His age, his battered good looks, his accent, the slight sibilance in his voice, his culinary erudition worn lightly, his finely honed knife skills and the ’70s-era funk of his wood-paneled kitchen: It is somehow a mesmerizing package.”

You can find the videos here. If you prefer your advice in written form, Pépin has released a new cookbook, updating one from 1990.

Take a virtual tour of the fabled Honey Forest in northeastern Turkey, which is home to the beekeeping traditions of the Hemshin people. The forest is full of the prized hornbeam trees that have been used for generations to keep bees.

With a little luck and some planning, you may catch a glimpse of the Leonids meteor shower. Every few decades, it produces a meteor storm where more than 1,000 meteors can be seen an hour. Here’s a guide to watching.

This GQ profile on the rise of the rap star Megan Thee Stallion.

The pangrams from yesterday’s Spelling Bee were eminently and imminently. Today’s puzzle is above — or you can play online if you have a Games subscription.

P.S. Our colleagues at DealBook are hosting an online summit today and tomorrow that features interviews with Anthony Fauci, Elizabeth Warren, Bill Gates and others. Register here to watch for free.

Today’s episode of “The Daily” is about Europe’s response to the latest wave of virus cases. On the latest “Sway,” Kara Swisher interviews Chamath Palihapitiya, one of Silicon Valley’s most successful investors.

Claire Moses, Ian Prasad Philbrick and Sanam Yar contributed to The Morning. You can reach the team at [email protected].