The crisis in Venezuela deepens, the U.S. shutdown continues and a hedge fund billionaire sets a real estate record. Here’s the latest: 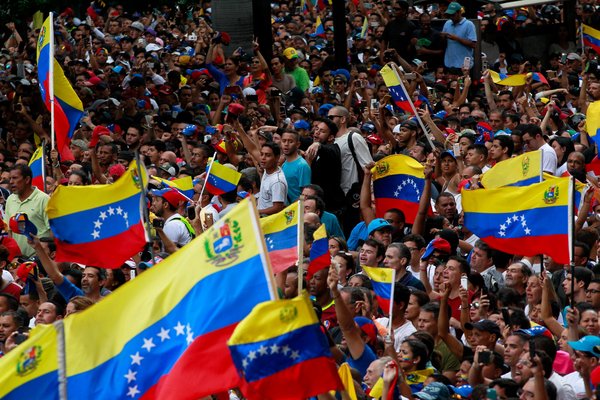 A day after an opposition leader proclaimed himself the country’s rightful president, the military declared its loyalty to President Nicolás Maduro, deepening the political crisis.

Details: The Trump administration recognized the opposition leader, Juan Guaidó, as the legitimate leader of Venezuela, and Secretary of State Mike Pompeo called on nations across the Americas to do the same. (Several, including Canada and Denmark, already have).

Mr. Maduro, in turn, cut ties with the U.S. and ordered American diplomats to leave Venezuela. But the U.S. said it would not heed the order because Mr. Guaidó had invited them to stay.

China, which has invested billions in Venezuela, urged all sides to “resolve their political differences.” Russia warned the U.S. not to intervene in Venezuela’s domestic affairs and Mexico has notably held back on recognizing Mr. Guaidó.

Background: Venezuela’s government has overseen the near-total collapse of its economy. Here’s a primer on how the country got to this dire situation.

What next? Still unclear. Mr. Guaidó said he intended to serve as interim president until the next election. And the Trump administration said it was ready to send the country $20 million in aid. But with the military standing by Mr. Maduro, an analyst told us, commanders appear to have concluded Mr. Maduro has the upper hand for now.

Measures to end the U.S. shutdown fail in the Senate

Lawmakers voted against two competing proposals to reopen the government, sending Congressional leaders back to the drawing board for a bipartisan solution to end the impasse.

Details: Each party presented its own measure. The Republican proposal included $5.7 billion in funding for President Trump’s border wall, paired with legal protections for some immigrants. The Democratic proposal would have temporarily reopened the government until Feb. 8, but omitted wall funding.

What’s next? Lawmakers and aides in both parties expressed hope that the double-barreled losses would break the logjam that has gripped Washington since the partial shutdown began. The urgency is mounting, with 800,000 federal workers set to miss their second paycheck on Friday.

House Democrats said they were considering giving Mr. Trump as much as $5.2 billion for border security — but not for a wall.

What about the State of the Union? Mr. Trump agreed to delay the landmark speech, originally scheduled for next Tuesday, until after the government reopens.

Go deeper: Aviation workers’ unions warned that the shutdown presented an “unconscionable” safety threat for air travel. And nearly six weeks in, the shutdown is eroding the good will of highly skilled federal workers who chose public service over higher-paying private employment.

A global push for safeguards in gene editing

Almost two months after a Chinese researcher, He Jiankui, announced that he had created the first genetically edited babies, scientists are trying to devise international standards that would prevent such experiments in the future.

While most researchers agree that major health and science institutions should act quickly, they differ on the best approach.

Background: Some U.S. researchers said Dr. He told them beforehand about his experiment — in which he disabled a gene in the embryos that allows a person to become infected by H.I.V. — but they were unable to stop him, in part because China’s system is so complex that the scientists didn’t know who to alert. A global system would ideally eliminate that problem.

Why it matters: Scientists fear that genetically edited babies could develop unknown health problems that could be inherited by subsequent generations. They also worry about attempts to alter genes for physical features, intelligence or athletic prowess.

What’s next? The World Health Organization is assembling a panel to create global standards and the World Economic Forum also had a discussion on the issue.

Spy satellites may give businesses an edge

Background: The Chinese province of Guangdong stopped publishing a monthly health report on its manufacturing sector in October, after five consecutive months of declining production amid the trade war with the U.S.

But a small company in San Francisco found a way to get that crucial data using photos and infrared images captured by satellites, and now it’s selling it to hedge funds, banks and other investors.

Why it matters: Satellites already monitor everything from how busy retailers’ parking lots are, to oil tank levels, to illegal mining activity — giving companies a new competitive advantage.

And the niche seems set for further growth: Nearly 730 satellites were launched in the last decade, and another 2,220 are expected to follow in the next ten years.

Afghanistan: U.S. and Taliban negotiators are close to striking a deal in which American troops would withdraw in exchange for a pledge from the insurgents that the country wouldn’t become a terrorist base again, officials said. Though many details remain unclear, Western diplomats said they expected an announcement imminently.

China: The Foreign Ministry said Yang Hengjun, the Australian writer detained this week, was suspected of “endangering national security” — making him the third foreigner held on that sweeping charge. Australian Embassy officials in Beijing have been pushing for access to him.

Censorship: China appears to have blocked Microsoft’s search engine, Bing, despite the company’s efforts to comply with the country’s restrictions — a potential sign that Western companies can do little to persuade Beijing to let them into the world’s largest internet market.

Renault: The French carmaker announced new leadership a day after Carlos Ghosn resigned as chairman and chief executive from his Tokyo jail cell. Jean-Dominique Senard, the new chairman, and Thierry Bolloré, the new C.E.O., are tasked with mending Renault’s alliance with Nissan. Here’s what’s at stake.

Indonesia: A Christian politician from the capital city of Jakarta was released from prison after serving two years for blasphemy against Islam, a case that led to vast protests against the former governor and highlighted the rise of political Islam in the country.

Malaysia: The ousted former Prime Minister Najib Razak, who now faces dozens of corruption-related charges, pleaded his case to the public in a music video. He posted his Malay-language rendition of the R&B hit “Kiss and Say Goodbye,” with new lyrics, on Facebook.

North Korea: Kim Jong-un praised President Trump for his “unusual determination” to settle the countries’ nuclear arms dispute through a second summit meeting, according to local news media, and said he would work “step by step” with the U.S.

Ukraine: Former president Viktor Yanukovych was found guilty of treason for inviting Russia to invade the country and reverse a pro-Western revolution five years ago, the first ruling to formally determine he served Russian interests. He was sentenced to 13 years in prison.

$238 million: That’s what a hedge fund billionaire paid for an apartment in New York City — the highest price ever paid for a home in the U.S.

Overlooked no more: Mabel Stark became the world’s most celebrated tiger trainer, spending most of her life among the big cats at circuses and theme parks. She died in 1968 and never received a Times obituary, until now.

Tidy up your digital life with these tips to organize your personal tech.

Become less angry by learning to slow down.

Robert Burns, the Scottish poet, was born on this day in 1759. He wrote hundreds of poems and songs before his life was cut short by illness, including the New Year’s Eve favorite “Auld Lang Syne.”

His use of vernacular is a barrier for English speakers, but it is difficult to overstate the esteem he commands in Scotland and in the hearts of expatriates like this writer, who grew up in Burns’s home of Ayrshire.

His verses gave dignity and voice to the disenfranchised, and he is beloved for his romanticism and sense of humor. Scots around the world celebrate his birth with “Burns suppers.”

The most elaborate celebrations feature pipers marching in with a haggis (a traditional concoction of minced offal, oatmeal and spices) to a standing ovation. The host recites Burns’s praise-filled “Address to a Haggis.” Eating and toasts from the “laddies” and “lassies” follow.

So tonight, whatever is on your plate, join me in a toast to Scotland’s best-loved son.

Jeanie Kay, a designer on the briefings team, wrote today’s Back Story.