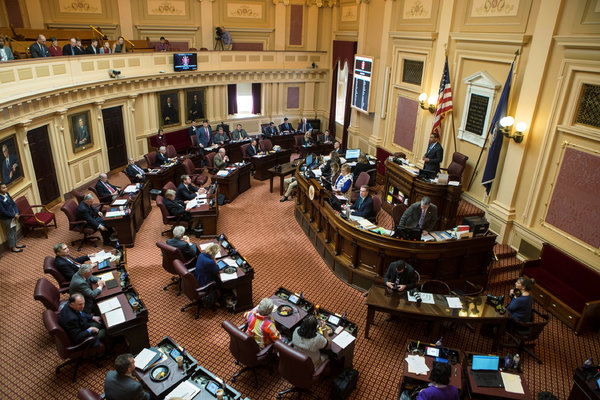 Meredith Watson accused Justin Fairfax of raping her while they were students at Duke University in 2000. In a statement, Ms. Watson said she was coming forward after learning about allegations disclosed this week by Vanessa Tyson, who said Mr. Fairfax assaulted her in 2004.

Mr. Fairfax’s ability to stay on as lieutenant governor now appears more precarious, with leading Democrats — including some Congressional Black Caucus members — calling for an investigation. Mr. Fairfax, above in the capital today, has denied both allegations.

It’s the latest in a week of turmoil in the commonwealth. Revelations about past racist behavior by the governor, attorney general and a top Republican state senator are testing the state’s reputation as a progressive-minded beacon. The week has also reinforced that blackface, with its roots in demeaning minstrel-show traditions that date to the 1830s, has never gone away.

2. The Supreme Court blocked a Louisiana law that would have limited access to abortion providers. But it may be only a temporary setback for the anti-abortion movement.

The ruling was a temporary stay of the law, which requires doctors performing abortions to have admitting privileges at nearby hospitals, and the court is likely to hear a challenge to the law on the merits in October.

The Louisiana law is just one case in a broader strategy to chip away at abortion rights, as abortion opponents advance a long-term and wide-ranging strategy to control state legislatures and governorships. Above, protesters outside the court in January.

In a surprise move, Chief Justice John Roberts Jr. joined the court’s liberal wing in the 5-to-4 decision. Our Supreme Court reporter takes a look at how the chief justice balances guarding his court’s legitimacy against his generally conservative impulses.

3. The acting attorney general told Congress that he had “not interfered in any way with the special counsel’s investigation” or provided information to the White House about it.

But Matthew Whitaker, appearing before the House Judiciary Committee, refused to discuss other things, like his conversations with President Trump, or why he recently said the special counsel’s inquiry would soon wrap up. He also declined to defend the investigation as his predecessor and likely successor at the Justice Department have done.

Separately, Mr. Trump is moving toward accepting a border-security deal that would fall well short of his once-firm demand for $5.7 billion for a wall at the southwestern frontier.

4. When the world’s richest man announced he was getting a divorce on Twitter, it was just the first surprise of many to swirl around Jeff Bezos, the Amazon founder.

Steamy texts, a private investigation, claims of blackmail — and a suspicion that politics are behind it all — followed Mr. Bezos. He raised the stakes Thursday when he accused the National Enquirer and its publisher, American Media Inc., of trying to extort him.

Mr. Bezos said the company had threatened to publish lewd photos of him if he did not say publicly that the tabloid’s earlier reporting on him was not motivated by politics. We broke down how a tabloid tale escalated, and exploded and

Gavin de Becker, Mr. Bezos’s security chief, was tasked with finding out how The National Enquirer obtained the photos. He’s counseled governments, celebrities and countless readers on how to ward off threats and stay safe in a scary world.

5. Oil sanctions imposed on Venezuela last week by the Trump administration were meant to punish President Nicolás Maduro and force him to cede power to the opposition leader. The effects have hit its citizens harder and faster than expected.

Customers suspended contracts, banks suspended Venezuelan accounts, and a dozen tankers filled with Venezuelan crude sat stranded across the Caribbean. But the Venezuelan state oil company, the main target of the sanctions and Mr. Maduro’s bankroller, has found a new way to survive with a boost from its biggest oil investor, Russia’s state-run Rosneft.

Now, many Venezuelans fear that if Mr. Maduro hangs on to power, the sanctions will push the country to the brink of humanitarian catastrophe. Above, people wait to purchase hard-to-find food items in January.

“I’m afraid that if these sanctions are implemented in their current form, we’re looking at starvation,” a Venezuelan economist said.

6. At least 10 people died in a fire at a Brazilian training center for young soccer players run by one of South America’s most prominent teams.

The fire struck a dormitory of the training center of the Flemengo club in Rio de Janeiro where many players between the ages of 14 and 17 were asleep. The fire reverberated through the soccer world and focused the attention on living conditions for young Brazilian players, many of whom live in similar dormitories across the country. Above, fans gather outside the training center to pray.

“Training at Flamengo is realizing your life’s goal,” a Brazilian sports columnist and author said. “But now it’s a dream turned into a nightmare.”

7. For years, competitive surfing has excluded women from some of the biggest competitions around the world. But that’s beginning to change.

The Times Magazine talks to a group of female surfers, including Paige Alms, above, who have insisted upon the same right to risk their lives in competition that men enjoy, and for equal pay — and they have been more successful than they ever imagined.

8. The Grammys made a series of changes in the past year to address its lack of diversity. But whether new nominees will win — or big names will show up at the awards show on Sunday night — isn’t guaranteed.

One clear change viewers will see is that eight, instead of five, acts will now compete in four major categories: album, record and song of the year, and best new artist. That change satisfied critics by adding more women to the mix, but in many ways the Grammys are still walking a tightrope of balancing diverse representation while staying culturally relevant, our music reporter writes.

In this week’s In Her Words, our gender newsletter, we take a look at how Ariana Grande and Cardi B, above, who are up for a collective seven Grammys, have taken music video tropes created by men — audacious displays of money and sex — and expertly extracted the testosterone.

9. Are you someone who wants to blame winter for everything?

Only about 6 percent of the population has seasonal affective disorder, a form of depression that is commonly understood as a winter affliction. The rest of us are just battling winter blues. Blame it on your circadian rhythm, which gets disrupted when the days get shorter and nights longer.

We have a slew of ways to beat back the winter doldrums, including light therapy, herbalism and forcing yourself, and others, to be social.

Perhaps you’re looking for a wintertime sport instead. An increasing number of people are taking up snow hiking: wintertime trekking using snowshoes or special boots. Here’s what you need to know.

10. Finally, we end with a woman known as “the Black Fairy.”

During the occupation years in Germany after World War II, the offspring of German women and African-American soldiers were called “brown babies” or “mischlingskinder,” a derogatory term for mixed-race children.

Mabel Grammer, an African-American journalist, and her husband, an Army chief warrant officer stationed in Germany, adopted 12 of them and she found homes in the U.S. for 500 others. She never received a Times obituary, until now. Hers is the latest in our Overlooked series.

“I just think of my own life,” one of her children said. “The opportunities to be where I am today would not have been there. I know that for a fact.”

Have a wonderful weekend.

What did you like? What do you want to see here? Let us know at briefing[email protected].