Good morning. We know how to reduce the virus’s spread — even though we’re not doing it. 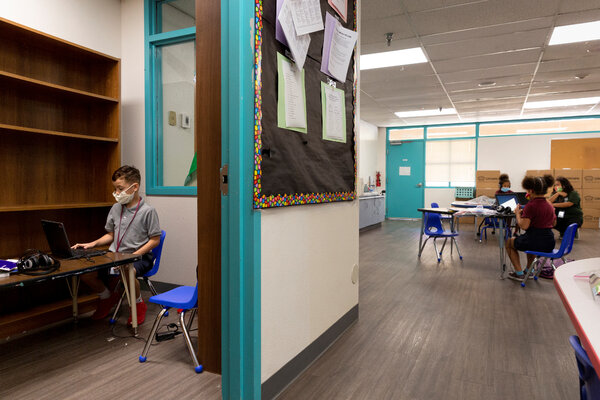 The ebb and flow of coronavirus cases over the last year has obscured a basic truth: We know a lot about how to control the virus’s spread.

Mask-wearing makes a big difference. So does limiting indoor gatherings. In particular, closing indoor restaurants, bars and gyms has reduced the virus’s spread in many places.

Arizona is an excellent example. Its governor, Doug Ducey, a Republican, resisted taking aggressive action for weeks. But in late June, he closed bars, movie theaters and gyms and banned gatherings of 50 people or more. The rules began to lift in August.

Other states had similar success over the summer, and it’s worth emphasizing that their actions often fell well short of a full lockdown. “Unfortunately, the debate has sometimes devolved into these two camps — you’re either pro-lockdown or ‘let ’er rip,’” Jennifer Nuzzo, a Johns Hopkins University epidemiologist, told me. “There is a lot of real estate between those two positions.”

Over the past week, with the number of U.S. infections setting records every day, many states have begun announcing new restrictions. But they often fall short of what experts say is needed. Two examples are Ohio and New Jersey, which are allowing bars to serve indoors until 10 p.m. Another example is Arizona, where restaurants and many bars remain open even as cases have surged again.

(A new Times analysis finds that the surge is worst in states where leaders failed to maintain strong containment efforts.)

The most common recommendations I’ve heard from epidemiologists are: Political leaders should deliver clear, repeated messages about the effectiveness of masks. Some indoor activities can continue so long as people are masked. But the spread is now rapid enough in many states that bars, restaurants and other cramped indoor spaces should close temporarily.

Experts also say that political leaders should discourage people from participating in big Thanksgiving gatherings. Otherwise, says Donald G. McNeil Jr., a Times science reporter, “we will be doing as a nation what the South did on Memorial Day weekend: opening ourselves up to holiday travel at a time when cases are rising.”

My colleague Jonathan Wolfe interviewed Dr. Anthony Fauci, the country’s top infectious disease specialist, yesterday, and he predicted that the coming months would be brutal. “December, January and early February are going to be terribly painful months,” Fauci said.

For more from their conversation, look for the next edition of the Coronavirus Briefing. You can subscribe here.

Pfizer released new data on its vaccine trial that was even more encouraging than the initial data: The shots were 95 percent effective and had no serious side effects.

Pfizer and Moderna, which has also reported promising results for its vaccine, have estimated they will have enough doses to vaccinate 22.5 million Americans by January.

A quarter of a million people have now died in the U.S. from Covid-19, with no end in sight.

New York City will close public schools again. About one-third of the city’s 1.1 million students had been attending some in-person classes for the last eight weeks.

Scientists say there’s little to no evidence that deep cleaning mitigates the threat of the virus indoors, because it primarily spreads through inhaled droplets.

Photos of Gov. Gavin Newsom of California attending an indoor dinner have sparked outrage. Other leaders in the state have also flouted orders and guidelines, even as they have repeatedly admonished residents to be extra vigilant.

Workers for Amazon, Walmart and other retail companies are not receiving the same bonuses and raises as they did during the first wave, even though their health risks have increased.

President-elect Joe Biden urged the Trump administration to begin the transition process. He said that the Trump appointee who runs the General Services Administration has the authority to give federal resources to Biden’s team.

Biden acknowledged the potential for Republicans to obstruct his agenda if they keep control of the Senate after two Georgia runoff elections in January, mentioning “some real brick walls.”

Democratic and Republican donors have already poured more than $125 million into Georgia’s runoff races. “It’s the Super Bowl of American politics,” one Republican told The Times.

Election officials in Arizona, Georgia and other states have received threats fueled by President Trump’s false claims that voter fraud cost him the election.

The Federal Aviation Administration cleared Boeing’s 737 Max to fly again. The plane had been grounded for 20 months after two fatal crashes.

A federal judge blocked Trump’s policy of turning away migrant children at the border as public health risks, ruling that it deprived them of due process.

The White House asked the Justice Department to investigate Omarosa Manigault Newman, a former Trump aide, one day after her publisher said in 2018 that she had written a negative tell-all memoir.

Australian troops unlawfully killed 39 civilians and prisoners in Afghanistan over an 11-year period, Australia’s military said. It is a rare public accounting of abuses in distant war zones.

Robinson Cano of the Mets will miss the 2021 baseball season after testing positive for a synthetic steroid — his second doping violation.

Charles Yu won the National Book Award for fiction for his novel “Interior Chinatown.” Les Payne and Tamara Payne won the nonfiction prize for their Malcolm X biography, “The Dead Are Arising.”

A Morning Read: A long-awaited dredging of Brooklyn’s Gowanus Canal, one of America’s dirtiest waterways, has begun. Since the mid-1800s, industrial pollutants, raw sewage and storm runoff have accumulated, causing a noxious sediment known as “black mayonnaise.”

From Opinion: Kara Swisher interviews the Harvard economist Raj Chetty on the latest episode of “Sway.” And Jamelle Bouie, Gail Collins and Nicholas Kristof have columns.

Lives Lived: For decades Frederick Weston made art in dingy Manhattan hotel rooms, creating collages that explored the male body and Black queerness and hoping for a break. It arrived belatedly, a few years before his death last month. He was 73.

Hollywood has a long history of using disability or disfigurement as a shortcut to portray evil. Think of Darth Vader, Freddy Krueger, Lord Voldemort or Bond villains. The latest example — and one causing criticism — is the Grand High Witch character, played by Anne Hathaway, in the movie “The Witches,” an adaptation of a 1983 children’s book by Roald Dahl.

In the book, Dahl describes the witches’ hands as having animal characteristics, with “thin curvy claws, like a cat.” Cover illustrations over the years have shown the claws with five fingers. In the movie, Hathaway’s character has three-fingered hands that resemble the hands of people with the congenital disorder ectrodactyly, also known as split hands.

In response to the film, people with ectrodactyly and other conditions have posted photos of their hands and arms on social media with the hashtag #NotAWitch. “This isn’t about being overly sensitive, a ‘snowflake’ or being too politically correct,” Briony May Williams, a “Great British Baking Show” semifinalist, wrote on Instagram. “This is about showcasing limb difference as ugly, scary, gross and evil.”

“Disabled people either play villains or happy snowflake angel babies,” Maysoon Zayid, a comedian and writer who has cerebral palsy, told Cara Buckley of The Times.

Both Warner Bros., the movie’s studio, and Hathaway apologized for the portrayal, saying they had not made the connection between the character’s hands and limb differences. That explanation highlights another issue: the dearth of disabled people who work in Hollywood, both on screen and off.

Try growing microgreens on your kitchen counter for some highly nutritious and superfast salad fixings.

Scents and memory are inextricably tied together — the smell of a grandmother’s house, a childhood pet, or a particular brew of morning tea. The Times asked readers to send us their scent memories. Read through them in a “museum of smells.”

Here are some soothing recommendations of under-a-minute TikToks.

The pangram from yesterday’s Spelling Bee was noblewomen. Today’s puzzle is above — or you can play online if you have a Games subscription.

P.S. Watch a trailer for “Some Kind of Heaven,” a new documentary from The Times and Magnolia Pictures that examines the meticulously crafted suburban bliss of The Villages, America’s largest retirement community, in Florida.

Today’s episode of “The Daily” is about the pandemic economy. On the latest Modern Love podcast, a couple confronts issues of race in their relationship.