China and U.S. agree: Trade deal should roll back tariffs

The two countries said Thursday that any initial trade deal would include rolling back a portion of tariffs placed on each other’s products.

The move suggested the two sides were getting closer to a “phase one” trade agreement that would ease tensions. It hasn’t been announced exactly what tariffs might be dropped, or when.

Related: After years of cheap lending, China’s financial sector is riddled with debt. Officials are now trying to clean up the messy, barely regulated banking system, while also suppressing any potential panic.

Separately: A court in China convicted and sentenced to death a man accused of trafficking fentanyl to the U.S. — an issue that President Trump has urged President Xi Jinping to crack down on. 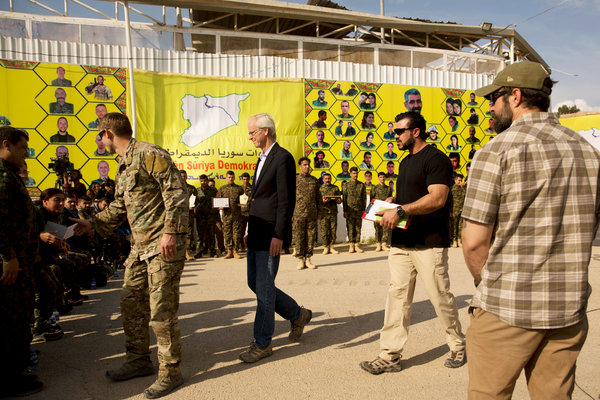 The top U.S. diplomat in northern Syria criticized the Trump administration for not trying harder to avert Turkey’s military offensive there last month.

In an internal memo, the diplomat, William Roebuck, questioned whether diplomacy, economic sanctions or increased military patrols might have deterred Turkey from taking over a region that was once controlled by America’s Syrian Kurdish allies. “We won’t know,” he wrote, “because we didn’t try.”

His memo appears to be the first formal dissent on Syria from a Trump administration official to be made public. (Pentagon officials were alarmed by the sudden shift in Syria policy, but top officials kept their views private.)

How we know: The Times obtained a copy of the unclassified memo from someone who said it was important to make Mr. Roebuck’s assessment public.

Quotable: “One day when the diplomatic history is written,” Mr. Roebuck wrote, “people will wonder what happened here and why officials didn’t do more to stop it.”

On the ground: Our reporters traveled along the only major road that runs the length of northeast Syria to make sense of the new power dynamic taking shape there. It wasn’t easy.

Ukraine planned to bow to Trump

In early September, the country’s new president, Volodymyr Zelensky, was faced with a dilemma: capitulate to President Trump’s demands to publicly announce investigations of his political enemies, or refuse — and lose desperately needed military aid.

The episode goes to the heart of the impeachment inquiry into Mr. Trump.

After much discussion, Mr. Zelensky’s staff members made the decision to concede, and made plans for him to announce investigations on CNN. They reasoned that it would be worth the aid and support in peace talks to appear as though they were taking sides, something they would have preferred to avoid.

How we know: We went to Kiev and spoke to government officials, lawmakers and others close to the Zelensky government. We also relied on testimony from the Trump impeachment inquiry.

If you have 14 minutes, this is worth it

A game for life

For Indigenous Australians in isolated towns, the brutal sport of “bush footy” is almost a religion. “All them young fellas getting stuck in town and getting into trouble,” said one coach. “That’s why we take them out to other communities competing in football.” And women play too.

Come along as virtually an entire town drives hundreds of desert miles to a carnival, a celebration centered on the game that brings together far-flung Indigenous communities from across Australia’s Central Desert.

Britain: The police identified the 39 people who were discovered in a refrigerated trailer near London last month, confirming that all the victims — eight women and 31 men — were from Vietnam.

Twitter: Two former employees of the social media company, an American and a Saudi, were charged with using their access to the site’s internal systems to spy for Saudi Arabia, and a second Saudi was also charged. The case, a first in the U.S., underscores Saudi efforts to silence critics both inside the kingdom and abroad, and raises concerns about Big Tech’s security.

Russia: A recent raid on an illustrious physics institute in Moscow stirred questions about the country’s increasingly aggressive and erratic security apparatus — and why it is operating at odds with President Vladimir Putin’s stated policy goals.

Snapshot: Above, a student picking up her lunch on the U.C. Berkeley campus. “There’s nowhere in the world that robots are a more integral part of its sidewalks,” said an executive at Kiwi Campus, a start-up experimenting with food delivery robots.

Mona Lisa: Should the iconic Leonardo da Vinci portrait be taken down? Our art critic argues that the painting creates a security hazard at the Louvre, and is an educational obstacle and not even a satisfying bucket-list item.

Queen Elizabeth II: The 93-year-old monarch will stop buying clothes made with real fur, Buckingham Palace confirmed. But she will keep official garments lined with fur for ceremonial occasions.

Overlooked no more: Annie Londonderry, who in June 1984, at about age 23, cycled away from her home in Boston, leaving behind her husband and three children, to travel around the world in a journey that came to symbolize women’s independence. She never received an obituary in The Times until now.

What we’re reading: This article on Phoebe Waller-Bridge in Vogue. Our Magazine writer Taffy Brodesser-Akner writes, “I loved Lauren Collins’s sharp, large-hearted profile of the creator of ‘Fleabag’ — even though it is hard for me to understand why two such glamorous women agreed to meet for any part of it at my least favorite sports bar in Midtown Manhattan (and that is saying something).”

Watch: The HBO show “His Dark Materials” has a more rebellious, questioning outlook — adolescent, in a good way — than other fantasy sagas.

Read: “The Beautiful Ones,” Prince’s unfinished memoir, is a No. 1 debut on our hardcover nonfiction and combined print and e-book nonfiction best-seller lists.

You may have already noticed signs of holiday spirit. Or at least merchandising.

Here in New York this week, your Back Story writer walks past (rather, goes out of her way to walk past) the Bryant Park Christmas market on her way to work. Vendors sell ornaments, dog-themed socks and calendars, and thick, soothing hot chocolate — even if the temperature hasn’t dropped all that far.

It’s not just New York. Christmas markets, an Austrian and German tradition dating to the 1200s, have expanded. They take in billions of dollars yearly in Germany. In Britain, the number tripled from 2007 to 2017. They’ve also popped up in Japan, Singapore and China, where Christmas is not a public holiday; and in the Middle East, like Dubai.

They fit seamlessly into the era of experiential retail, where temporary experiences can be more profitable than brick-and-mortar stores.

And lest you dismiss the markets as mere holiday profiteering, keep this in mind: At a time of chains and mass production, the markets make room for small production and artisanal craft.

This is the last time I will be putting together your Morning Briefing, because I’m moving over to our gender newsletter, In Her Words. But I leave you in the very capable hands of Melina Delkic.

Thank you
To Mark Josephson and Eleanor Stanford for the break from the news. Melina, who will be writing this newsletter starting next week, wrote today’s Back Story. You can reach the team at [email protected]

P.S.
• We’re listening to “The Daily.” Our latest episode is about a Supreme Court case on job discrimination against gay and transgender workers.
• Here’s our Mini Crossword, and a clue: The “rock” in rock-paper-scissors (four letters). You can find all our puzzles here.
• Maggie Haberman and Michael Schmidt, two of our Washington reporters, recently answered reader questions on Reddit. Here are a few highlights.