We’re covering Europe’s successful virus restrictions, the political relationship between Britain and the U.S. and some very hungry caterpillars. 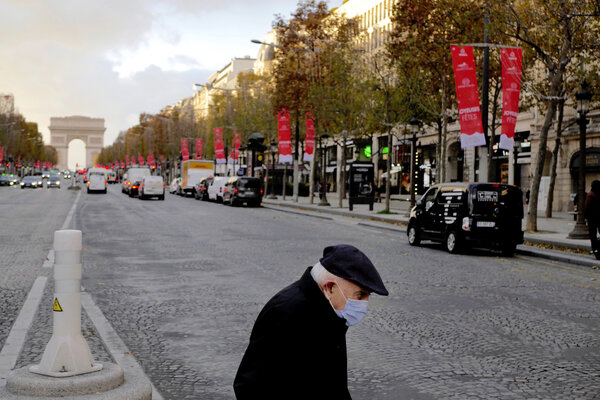 New coronavirus case rates are falling for the first time in months across Europe after new restrictions were put it place, according to the World Health Organization. That is a significant change from two weeks ago, when the agency reported about two million new infections per week across the continent. Last week, that number fell by 10 percent, to 1.8 million.

The restrictions, many of which were announced at the end of October, are less severe than those in the spring — many businesses are closed, and gatherings are limited in size. Limits on movement are far less strict than they were. Schools generally remain open, unlike in much of the United States.

Less than a month into its second lockdown, France has seen its seven-day average for new daily cases cut almost in half, to 28,500. Spain, Belgium, Switzerland and the Czech Republic have also seen decreases. But the number of deaths is still rising, with 4,500 lives lost to the virus every day in Europe.

Africa has surpassed two million confirmed cases, though low testing means the numbers could be higher.

All over the world, workers are soaping, wiping and fumigating surfaces to fight the coronavirus. But scientists increasingly say that there is little to no evidence that contaminated surfaces can spread the virus, and these efforts may be wasted.

Researchers reported that the vaccine being developed by AstraZeneca and the University of Oxford produced a similar immune response when tested in older and younger adults.

The slaughter of minks in Denmark to prevent the spread of a potentially dangerous new strain of the coronavirus has prompted a political crisis in the country, with the minister of agriculture forced to step down and the government in danger of collapse.

Prime Minister Boris Johnson of Britain this week rolled out ambitious, back-to-back initiatives on military spending and climate change. Both are likely to please President-elect Joe Biden and may serve as a signal that Mr. Johnson believes he can work with the incoming president as well as he did with his predecessor.

Britain’s departure from the European Union makes it no longer useful to the U.S. as an Anglophone bridge to the leaders of continental Europe. But these initiatives, which include building more warships and phasing out new gas- and diesel-powered cars within a decade, may demonstrate to Mr. Biden that Britain can be a relevant partner nonetheless.

Quote: “Britain won’t be playing this role of connecting the U.S. with Europe,” said one London-based analyst. “But the good news is they do want to play a role on the global stage. This says to the Biden people, ‘We’re all in; we want to work with you.’”

U.S. election: President Trump summoned Republican members of the Michigan Legislature to the White House as part of his effort to subvert the Electoral College process. Mr. Biden, who leads in Michigan by about 158,000 votes, said his attempts sent “incredibly damaging messages” about how democracy functions.

Secretary of State Mike Pompeo on Thursday became the most senior U.S. official to visit an Israeli settlement in the occupied West Bank and the disputed Golan Heights, a territory that Israel captured from Syria and later annexed illegally.

Mr. Pompeo declared that the Trump administration now viewed an international campaign to boycott Israel as anti-Semitic and that the U.S. would deny government support to groups that embrace the Boycott, Divestment and Sanctions (B.D.S.) movement. His visit was cheered by Israel’s right wing but denounced by the Palestinians.

Context: Mr. Pompeo’s string of photo opportunities could be highly useful if he were to seek the Republican nomination for president in 2024. Mr. Pompeo has courted white evangelical Christians, who are much more likely than other Americans to believe that Israel fulfills a biblical prophecy and that the gathering of Jews in Israel is foretold in the prophecy of the Rapture — the ascent of Christians into the kingdom of God.

B.D.S.: Is the movement anti-Semitic? It depends whom you ask — but it is loudly and proudly anti-Zionist.

Related: Palestinian officials are eager to make a new start with President-elect Joe Biden’s incoming administration. Ending the “pay to slay” compensation that the Palestinian Authority gives to those serving time in Israeli jails could be a first step.

If you have 7 minutes, this is worth it

Over the past two decades, leftist parties helped Hugo Chávez and then President Nicolás Maduro stay in power. But these allies have grown disillusioned with Mr. Maduro’s authoritarianism and corruption. The widespread discontent erupted in more than 1,000 flash protests in September.

Now, critics of Mr. Maduro say he’s turned the state’s security forces against the leftists who criticize him.

‘Pedo-hunting’: Police officers in the Netherlands are urging the public against acts of vigilantism after the death of a 73-year-old former teacher who was lured and attacked by a group of teenagers.

BuzzFeed to acquire HuffPost: In a deal led by the BuzzFeed founder Jonah Peretti, two giants of the web plan to join forces to better compete in an increasingly crowded field. The two websites will remain distinct, each with its own editorial staff.

Dublin zoo: After the popular tourist spot in the Irish capital warned that it might have to close permanently, it received more than a million euros (about $1.2 million) in donations in a matter of hours, in addition to pledges from the government.

‘Hangry’ caterpillars: The plot of “The Very Hungry Caterpillar” missed a crucial element: the pure, unadulterated rage of an insect unfed. Monarch butterfly caterpillars get violent when food gets scarce, a lab study found, head-butting one another for prime milkweed access.

A time for laughter: First in theaters before the second shutdown, and now online, actors and comedians have tried to cheer up France with experimental comedy, a little clowning and the escapism of a really good joke.

What we’re reading: This profile of Trevor Noah in GQ. “It’s a compelling piece on how growing up in apartheid-era South Africa shaped the comedian’s approach to America’s tumultuous 2020,” writes Dani Blum, of the Briefings team.

Cook: This lemon-garlic kale salad is rich with tang and crunch. Serve it as a snappy, fresh side dish or as a light supper.

Read: “Shuggie Bain,” Douglas Stuart’s autobiographical novel about the lonely gay son of an alcoholic mother in 1980s Glasgow, was named the winner of the prestigious Booker Prize on Thursday.

Do: Consider the proposal-less marriage. Some couples who already live together and share bank accounts are skipping the traditional celebrations.

The weekend is just around the corner. Our At Home collection has oodles of ideas on what to read, cook, watch and do while staying safe at home.

Lisa Selin Davis is the author of “Tomboy,” a book about how children’s exploration is stymied by gender norms. She spoke to our In Her Words newsletter about the sexism in kids’ lives. Here’s an excerpt.

What’s the long-term impact of having different stuff for boys and girls?

The more you segregate toys, the more you develop different skill sets and funnel them into different ways of being in the world. Girls’ clothes, for example, aren’t made for climbing and sports.

How does the ‘pink/blue divide’ play out?

By age 3, kids are trying to perfect the stereotypes they’ve learned. When you show kids counter-stereotypes, when you tell them that cars are for girls, girls like cars. Most kids like what they think they’re supposed to like.

How is the embrace of tomboys linked to misogyny?

The message that girls should have access to boyhood came with a disdain for whatever’s marked as feminine. When kids say, “I hate pink,” what they’re saying is “I hate what’s associated with girls.” Girls learn the gender hierarchy and start pushing this stuff away to make them seem cooler. By 6, they’re internalizing sexism.

Does ‘tomboy' exist in other languages?

Yes, more than 40 non-English languages have their own version. “Wildfang” in German, “garçon manqué” in French, “erkek fatma” in Turkish.

That’s it for this briefing. Have a peaceful weekend.

Thank you
To Theodore Kim and Jahaan Singh for the break from the news. You can reach Natasha and the team at [email protected]

P.S.
• We’re listening to “The Daily.” Our latest episode is about the pandemic economy.
• Here’s our Mini Crossword, and a clue: Liquidy gunk (three letters). You can find all of our puzzles here.
• Need an escape? Scrolling through real estate listings in far-flung destinations is a way to visualize an alternate life.
• The trailer is out for “Some Kind of Heaven,” a new documentary on The Villages, a retirement community in Florida, produced by The Times with Magnolia Pictures.