Today we’re bringing you a special edition of the Briefing, to look back on an extraordinary year.

As Dean Baquet, the executive editor of The Times, wrote in his introduction to our year-end photo roundup: “Certain years are so eventful they are regarded as pivotal in history, years when wars and slavery ended and deep generational fissures burst into the open — 1865, 1945 and 1968 among them. The year 2020 will certainly join this list.” 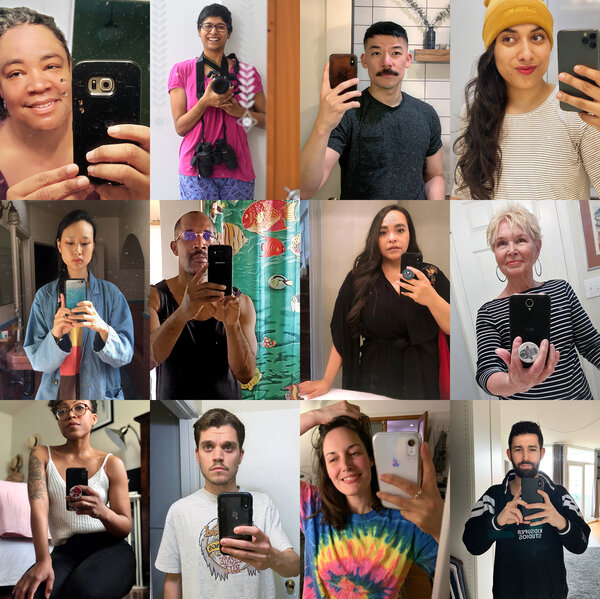 How we coped in a dark year

Seeking moments of light, we found solace in rescue animals, banana bread and — for the messy among us — the joy of not tidying up. We watched an awful lot of television, some of it excellent. We cooked, and cooked, and cooked (see below) — and then ordered takeout. Sometimes, we just played The Sims 4.

Readers told us about their silver linings, too. “I am thankful to be thankful,” one wrote.

Love in the time of Covid: The essays that appear in Modern Love don’t typically reflect the current news cycle. But during months of lockdown, people found love, resilience and sometimes just clarity in hard and hopeless places.

The pandemic pulled people together, even as it pushed them apart. (Our colleagues at The Morning even helped broker an engagement.)

One standout: At the border between Germany and Denmark, two lovers in their 80s found a romantic way to keep (almost) in touch. She brings the coffee, he the schnapps.

Resilience: “Winter is a primal time of death and loss, and a time for grief,” wrote Elizabeth Dias, a national reporter. “It reminds us that darkness, not only light, is part of the recurring rhythm of what it means to be human.”

And while Oxford couldn’t quite come through with a word of the year, Joe Biden may have found the perfect term: inshallah.

The stories you loved …

Your morning briefing aims to get you up to speed quickly, recapping the biggest headlines and offering a look ahead to the major stories The Times is covering that day.

But many of the most popular pieces this year weren’t part of the often exhausting news cycle. They were human-interest articles, sometimes with a hint of enigma. For instance:

In the Utah desert, a mysterious monolith appeared as if from nowhere — then vanished, in an undercover nighttime removal operation, before reappearing all over the world. (They’re surprisingly easy to build yourself, it turns out.) Four California men have taken responsibility for the initial structure, but a few questions remain.

Strange couplings: When your ex-boyfriend’s new girlfriend is Lady Gaga. Or when you’re the sociopath your husband married.

20 writers reflected on quitting — walking away from jobs, relationships, religion and even the assignment itself.

In 2020, three enormous stories — a pandemic, an election and a reckoning on racial justice — dominated the headlines. (Take a look at The Year in Pictures for a recap of all three.) But other subjects, significant or otherwise, were sometimes swept away by the torrent of news.

Here are seven stories that might have passed you by:

A self-published cookbook about pickles has become a cult classic in India.

Japan’s skateboarders, frequently shunned, hope that Olympic success (now pushed back to 2021) may lead to acceptance.

In the past three years, female runners have gotten a lot faster.

Actors, authors and other creators who are part of a new African-American vanguard defining the century talked about the art that inspired them.

Here lies the skull of Pliny the Elder, maybe.

What happened when a 16-year-old bridge player asked an 82-year-old — one of the greatest players ever — to team up with him for a tournament.

Faces that can’t be forgotten

This year, the world lost more than 1.7 million people to the coronavirus, with more than 300,000 deaths in the U.S. alone.

The Times tried to tell the stories behind the numbers with our Those We’ve Lost series, memorializing parents, children, committed frontline workers and people who had previously survived the Holocaust, the Spanish flu and other tragedies.

The killings of George Floyd, Breonna Taylor, Ahmaud Arbery and so many others in the U.S. broke hearts and prompted protests for racial justice across the world.

We also remembered and celebrated people whose lives helped shape history. Here are some for the ages:

As the second woman appointed to the Supreme Court, Ruth Bader Ginsburg offered pointed and powerful dissenting opinions that earned her late-life rock stardom. Here’s her obituary, and her life in pictures.

Kobe Bryant, the retired Los Angeles Lakers basketball star who was one of the greatest to play the game.

Chadwick Boseman, the regal actor who embodied a long-held dream of African-American moviegoers as the star of the groundbreaking superhero film “Black Panther.”

Bill Withers, the three-time Grammy Award winner whose songs turned the loves, struggles, regrets and joys of working people into art. Here’s our critic’s appraisal of the artist, and a video of him performing “Grandma’s Hands.”

Tony Hsieh, the technology entrepreneur and venture capitalist who built the shoe and clothing retailer Zappos into a $1 billion internet powerhouse.

Those left behind: Five Americans told the stories of people they lost to the pandemic — not to dwell on their deaths, but to celebrate how they lived. And one writer, mourning the loss of his 29-year-old best friend to the coronavirus, described the sensation of being ruined by a perfect love. “I am better because of it,” he writes.

The year in recipes

“The pandemic’s been a nightmare, of course,” our Food editor, Sam Sifton, wrote this month. “But if you’re looking for glimmers of grace and goodness amid it, start in the kitchen.”

Many of you cooked wonderful meals for yourselves and your loved ones this year, mastering tricky recipes or perfecting old favorites, even under colossal stresses.

For some, 2020 was the year you fell for the slow rhythms of sourdough. Others of you learned, definitively, that you do not like to cook, and consequently sought recipes that involved as little time in the kitchen as possible.

And you voted with your skillets and ovens. Among the recipes you made most popular this year:

Staving off trips to the grocery, you found endless uses for canned beans — simmered in red wine, or fashioned into cakes, or whizzed up into a soup as beautiful as any painting.

This classic, for when only a Bloody Mary (or a Virgin Mary) will do.

Samin Nosrat wanted to make lasagna with readers, and you gamely rose to the challenge. One participant’s verdict: “We will be eating like kings for a couple of days. Probably should break out the treadmill.”

Thank you for sharing your time with us this year. And that’s it for our special edition. See you on Monday with the latest news. — Natasha, on behalf of the whole Briefings team

You can reach the team at [email protected]