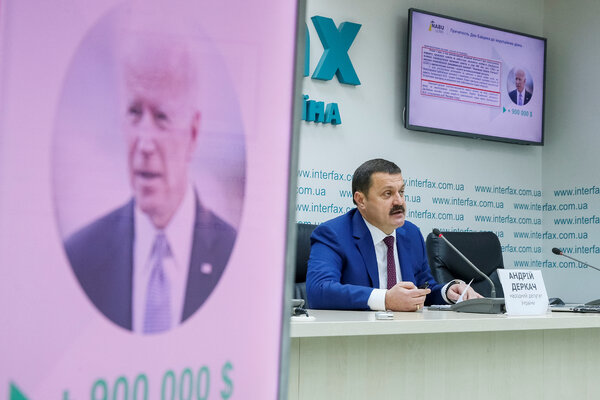 Federal prosecutors in Brooklyn are investigating whether several Ukrainian officials helped orchestrate a wide-ranging plan to meddle in the 2020 presidential campaign, including the possible use of Rudolph Giuliani to spread disinformation about Joe Biden and tilt the election in Donald Trump’s favor, according to people with knowledge of the matter.

In December 2019, Giuliani, then Trump’s personal lawyer, met with several Ukrainians, including Andriy Derkach, a member of Parliament who was later accused by Trump’s Treasury Department of being “an active Russian agent.”

Yesterday, Giuliani’s lawyer defended the search for information about Biden, disputing the assertion that Giuliani had relied on misleading information. “When you investigate allegations of corruption, you talk to all sorts of people; some are credible, and some are not,” he said, adding that “some day the truth will come out” about Biden’s dealings in Ukraine.

Denials: In an interview last year, Giuliani said there was nothing to dissuade him from meeting with Derkach, who was not under sanctions at the time. “I have no reason to believe he is a Russian agent,” Giuliani said.

Surrendering to the Taliban

As the U.S. completes its withdrawal from Afghanistan, more than 25 rural Afghan government outposts and bases in four provinces have surrendered to the Taliban, with each facility’s or town’s surrender feeding the next.

Among the negotiated surrenders were those of four district centers, which house local governors, police personnel and intelligence chiefs. People have been influenced by threats — with insurgents essentially sending the message to give up or die — as well as by bribes.

The Taliban have negotiated Afghan troop surrenders in the past, but never at the scale and pace of the base collapses this month, in the four provinces extending east, north and west of Kabul. The militants have secured key territory, weapons, ammunition and vehicles, often without firing a shot.

Quote: “The government is not able to save the security forces,” said Mohammed Jalal, a village elder in Baghlan Province. “If they fight, they will be killed, so they have to surrender.”

President Biden’s call for a 90-day investigation into the origins of the coronavirus came after intelligence officials said they had a raft of still-unexamined evidence that required additional computer analysis.

Though officials declined to describe that evidence, the revelations suggest that the government may not have exhausted its databases of Chinese communications, the movements of lab workers and the pattern of the initial outbreak of the disease around the city of Wuhan.

Biden has committed to making the results of the review public, but he added a caveat: “unless there’s something I’m unaware of.”

Details: In addition to marshaling scientific resources, the push is intended to prod American allies and intelligence agencies to mine existing information and to hunt for new intelligence to determine whether the Chinese government covered up an accidental lab leak.

Vaccine sweetener: Following a slump in U.S. vaccinations, states and businesses are offering more incentives for the unvaccinated, including chances to win money, vacations or a Super Bowl trip. In Ohio, a 22-year-old woman thought it was a prank when she received a call telling her she had won $1 million in a vaccine lottery.

Here are the latest updates on the virus and maps of the pandemic.

The mayor of a former mining community in Poland received death threats and was compared to a Nazi after trying to make vaccines obligatory for adults.

Twitter said yesterday that it had received a notice of noncompliance with India’s restrictive tech laws after officials asked the site to remove content critical of the government’s handling of the pandemic.

Visiting Rwanda, President Emmanuel Macron of France, above, said yesterday that his country had “a duty to confront history” and acknowledge that it had enabled the 1994 genocide.

New findings undermine Belarus’s claim that it diverted a dissident’s flight because of a bomb threat: The email said to have contained the threat was sent after the plane had already been diverted. Russia, responding to international moves to cut off air access to Belarus, blocked some European flights into and out of Moscow.

The U.N.’s top human rights body in Geneva voted yesterday to appoint a commission of inquiry to investigate possible war crimes committed in Israel and the occupied Palestinian territories. Israel denounced the decision as a one-sided sham.

Days after a deadly eruption of Mount Nyiragongo in the Democratic Republic of Congo, the threat of another eruption forced the evacuation of much of the city of Goma.

Hong Kong has a new type of prisoner: pro-democracy activists.

A prepandemic trade truce between China and the U.S., originally meant to be temporary, endures — and now appears to be setting new, lasting ground rules for global commerce.

A new poll finds that 15 percent of Americans say they think the levers of power are controlled by a cabal of Satan-worshiping pedophiles, a core belief of QAnon supporters.

Seven Tasmanian devils were born in a nature preserve on the Australian mainland, 3,000 years after the species was wiped out there. Now the question is whether they can survive away from their island home.

“Bunny dog why?” Bunny, an internet-famous sheepadoodle who presses buttons to communicate with her owner, has brought attention to a new area of study within animal cognition: the use of assistive technology for language acquisition.

The curators of a new exhibition at the British Museum about the first-century Roman emperor Nero are seeking to rehabilitate his tarnished image.

In 1964, rather than surrender his land to allow the building of an interstate highway, a Vermont farmer burned himself and his farm. His legend lives on.

“Day X,” a new five-part audio documentary from The Times, examines the rise of a new brand of extremism in Germany, and one shadowy figure in the middle of it. Katrin Bennhold, our Berlin bureau chief, discusses the project in this interview, which has been lightly edited and condensed.

How did you arrive at this series?

The rise of a far-right party, the Alternative for Germany, which was able to make it into the German Parliament and is the biggest opposition party there, is a big deal. Toward the end of 2018, German news media reported that there was this whole network of soldiers and police officers and like-minded civilians who were planning for the day democracy dies: Day X.

Franco A. is the special focus of one episode. He is somebody with racist, absolutist ideas. Why was it important to tell his story?

To me, one of the most frightening and most important features of the new right, as they call themselves — the old right being neo-Nazis and even Nazis — is that the new right believes in the same ideology, but they look different and they talk differently. We have this image of neo-Nazi skinheads in bomber jackets and tattoos. But a lot of these guys blend in much more. I feel we do need to show them out for what they are.

Jackfruit is perfect for a meatless meal, like this tangy sabzi from West Bengal.

Whether you’re hoping to catch up on reading on a beach, at a park or in the tub, our editors and reviewers’ picks of 73 books have you covered this summer.

“A Quiet Place Part II” — John Krasinski’s alien-invasion blockbuster sequel — is brasher than its predecessor, but just as wonderfully acted, our reviewer writes.

That’s it for today’s briefing. Thanks for joining me, and have a great weekend. — Natasha

P.S.: Season 2 of “Modern Love,” the Amazon Prime series based on the Times column, will premiere on Aug. 13.

The latest episode of “The Daily” is about the saga of Ryanair Flight 4978, which the government of Belarus forced to land in Minsk.