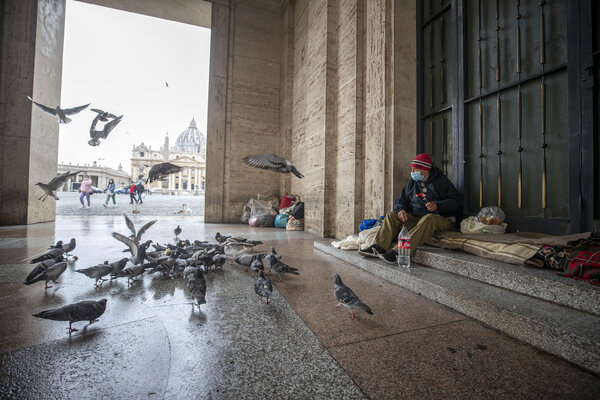 Those forgotten in Italy’s vaccine drive

While the Italian government has said that people have a right to get vaccinated no matter their legal status, many undocumented migrants and homeless people have been unable to secure shots, putting both them and others at risk.

To book vaccination appointments, people must enter their social security numbers. But only three of Italy’s 20 regions accept the temporary numbers given to hundreds of thousands of migrants.

More than 125,000 people have died in Italy from the virus. The country’s vaccine rollout started at a sluggish pace, with strategic hiccups and a shortage of doses.

Quotable: “My heart is so weak that if I get Covid it will take me away for sure,” said one homeless immigrant, 63. “I am scared.”

New cases of the coronavirus are rising in 14 African countries, with eight nations reporting surges of over 30 percent in the past week.

Travelers returning to Britain from Portugal or its island territories will no longer be able to avoid going into quarantine as of next Tuesday.

About 10,000 of the 80,000 volunteers for the Tokyo Olympics have quit amid rising coronavirus worries.

The White House announced that it would distribute 25 million vaccine doses this month to countries across Asia, Latin America, Africa and the Middle East.

The International Maritime Organization, a little-known U.N. agency that is responsible for reducing carbon emissions in the shipping industry, is doing the opposite. The organization has repeatedly delayed and watered down climate regulations.

Just last week, delegates met in secret to debate what should constitute a passing grade under a new rating system. Under pressure from China, Brazil and others, they set the bar so low that emissions can continue to rise at roughly the same pace as if there had been no regulations at all.

Close ties: Representatives of shipbuilders, oil companies, mining companies, chemical manufacturers and others with huge financial stakes in commercial shipping are among the I.M.O.’s delegates.

Discontent within Facebook has surged in recent weeks over the company’s handling of international affairs, culminating in tense meetings and an open letter, signed by more than 200 employees, calling for an audit of the company’s treatment of Arab and Muslim posts.

Employees have complained about the company’s decisions to take down posts from prominent Palestinian activists when clashes broke out in Israel, as well as messages critical of the Indian government’s handling of the coronavirus pandemic.

Facebook is in a tight spot. Governments across the world are pressuring it to remove content as they try to corral the platform’s power over online speech. But when Facebook complies, it upsets its employees, who say the social network has helped authoritarian leaders and repressive regimes quash activists and silence marginalized communities.

Analysis: “There’s a feeling among people at Facebook that this is a systematic approach, one which favors strong government leaders over the principles of doing what is right and correct,” said Facebook’s former head of policy for the Middle East and North Africa region, who left in 2017.

Denmark’s Parliament passed a law allowing the country to relocate asylum seekers to countries outside Europe, the latest in a series of hard-line measures there to discourage immigration. Above, a departure center for rejected asylum seekers in Denmark’s Jutland region.

Ashleigh Barty, the No. 1-ranked player in women’s tennis, is out of the French Open after aggravating an injury to her left hip during her second-round match with Magda Linette on Thursday.

Queen Elizabeth II said she planned to meet with President Biden during his visit to Europe this month.

United Airlines plans to order 15 supersonic jets, which could be the first to carry commercial passengers since the Concorde was retired in 2003.

China suspended all ultramarathons and long-distance races after 21 runners perished during a mountain race. Some of the runners’ relatives are quietly asking whether their loved ones could have been saved.

A herd of 15 elephants has been lumbering its way across China for more than a year, traveling more than 300 miles. Researchers are mystified.

The 360 or so remaining North Atlantic right whales are shrinking in comparison with earlier generations, declining in length by roughly 7 percent since 1981, which translates to a reduction of about three feet. The culprit is most likely fishing gear.

For years, Benjamin Netanyahu outfoxed his rivals. Here’s what changed this week.

A chef on the cookbook that changed her life

The chef and restaurateur Alice Waters, whose new book is “We Are What We Eat,” spoke to our Book Review.

What book, if any, most influenced your approach to food?

I got Elizabeth David’s “French Country Cooking” in my early 20s, shortly after I came back from studying in France in 1965. When I returned home to Berkeley, all I wanted to do was live like the French. Food is culture, and she revealed that. She also influenced me aesthetically — I loved the gracefulness and simplicity of her recipes and her cooking.

The last book you read that made you cry?

The last book you read that made you furious?

Marion Nestle’s “Unsavory Truth: How Food Companies Skew the Science of What We Eat.” That made me absolutely furious. The title of the book says it all. And I’m so grateful to Marion for telling the truth. We need her book more than ever right now.

And the last book you read that made you laugh?

Maira Kalman always makes me laugh. Her children’s books are incredible, like “Ooh-La-La (Max in Love).” The illustrations are unlike any others, and her own incredible imagination just comes out in them.

Tofu makhani is a tasty vegetarian alternative to butter chicken.

Famous on the Internet

Khaby Lame, a former factory worker in Italy, has become the fastest-growing content creator on TikTok.

P.S. A hidden haiku from a Times interview with Stephen King: “They say the minute / you show the monster, you take / away its power.”

The latest episode of “The Daily” is about the ultraconservative Texas Legislature. The show has been nominated for best international podcast at the British Podcast Awards.