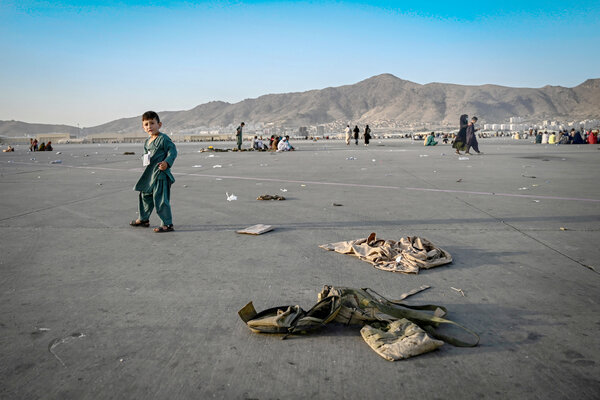 ‘There’s no way out’

Thousands of Afghan soldiers have fled to countries like Iran and Uzbekistan over the past few weeks as the Taliban rapidly took over. Tens of thousands more are now on the run, hiding and hunted by the Taliban. “There’s no way out,” said one commando, who was hiding in the mountains of eastern Afghanistan. “I am praying to be saved.”

The soldiers were all part of the sudden atomization of the national security forces that the U.S. and its allies had spent tens of billions of dollars to arm and train to stand against the Taliban, a two-decade effort at institution-building that vanished in just a few days.

Militants are intensifying a search for people they believe worked with U.S. and NATO forces, including among the crowds of Afghans at Kabul’s airport, and have threatened to kill or arrest their family members if they cannot find those they are looking for, according to a confidential document prepared for the U.N.

In Kabul, hundreds of protesters opposed to the Taliban’s takeover took to the streets for a second day. At one demonstration in the city, about 200 people had gathered before the Taliban broke it up violently. A curfew was announced in the southeastern city of Khost after protests. Here are the latest updates.

Evacuations: How news organizations like The Times got their Afghan colleagues out of Kabul, in a global rescue effort that included the Pentagon and Qatar.

‘A mockery of vaccine equality’

Plans in some wealthy nations to allow Covid booster shots even as much of the world is yet to receive a first shot have been met with criticism by some at the W.H.O. “As some richer countries hoard vaccines, they make a mockery of vaccine equity,” said Dr. Matshidiso Moeti, the W.H.O.’s Africa director.

The organization had called for a moratorium on booster shots until the end of September to free up supplies for low-income nations. But many countries are ignoring that appeal: The U.S. aims to start booster shots on Sept. 20; France and Germany have similar plans; and over a million people in Israel have already had them.

African countries continue to lag far behind those on other continents in inoculations, with only 2 percent of Africa’s 1.3 billion people fully vaccinated against the virus. Though vaccine shipments have accelerated in recent weeks, African nations are still not getting nearly enough to meet their needs.

The clear plastic barriers that have become commonplace in indoor settings during the pandemic do little to stop the spread of the coronavirus — and may make things worse.

Three vaccinated U.S. senators have tested positive for the coronavirus, adding to the number of breakthrough cases among lawmakers.

Droughts and wildfires in the U.S.

The severe drought that has gripped much of the Western U.S. is likely to continue into late fall. Follow live extreme weather updates here.

Above-average temperatures are likely across almost all of the West, while precipitation is expected to be below normal. Taken together, that all spells bad news for a region that is already experiencing major effects of drought, including dwindling water supplies, stunted crops, barren grazing lands and exploding wildfires.

Blazes continue to burn in Northern California. About 23,000 residents of El Dorado County have fled or prepared to evacuated. Air pollution was projected to remain at unhealthy levels — above 150 on the air quality index — in Sacramento and other cities near the Caldor wildfire.

A man who claimed to have a bomb in a pickup truck outside the Library of Congress in Washington surrendered to the police yesterday after hours of negotiations and the evacuations of several government buildings in the area.

U.S. regulators are once again taking aim at Facebook by beefing up claims in an antitrust suit.

The first accuser to testify at the trial of R. Kelly told jurors that she was only 16 when the singer had sex with her and that he had wanted her to dress even younger. Lawyers for the singer cast her as a disgruntled and jealous fan.

The Uffizi gallery in Florence is lending artworks to smaller Tuscan towns, increasing their appeal and strengthening its ties to the region.

A British High Court rejected an attempt to halt a warrant to kill Geronimo, an 8-year-old alpaca believed to have bovine tuberculosis — a diagnosis his owner denies.

Boxed in by stricter, Brexit-related rules for imported players and rising prices for British ones, Scotland’s soccer clubs may struggle to stay competitive.

Herbicides are losing the war against superweeds, with potentially drastic consequences for agriculture.

Chuck Close, who found success with his large-scale Photorealist portraits and became one of the leading artists of his generation, has died at 81.

An Afghan author reflects on his birthplace

Khaled Hosseini’s novels have offered a view of Afghan life that wasn’t limited to war and destruction. He talked to The Times about the pain and frustration of watching events unfold in his country from afar.

How has your sense of Afghanistan’s future changed over the year?

I was in Afghanistan early in 2003, and in those days, there was virtually no insurgency. There was this very heady optimism about where the country was headed — gender equality, rights for girls and women, people being able to participate in an open and representative political process.

Over the years we adjusted our expectations, and over time we came to expect that, well, that was all a pipe dream, but at least what we can hope for is a compromised sort of democracy, with corruption and all sorts of issues. Over the last couple of years, those hopes have declined. And in the last few days, they have been utterly crushed.

What should people be reading to better understand Afghanistan and Afghan people right now?

But there has been an uptick in demand for your books. Is there anything you want people to know who are picking up one of them for the first time?

These are stories. This is the perspective of someone who has lived in exile, essentially since 1980. But I do have a perspective, and I have a deep affection and a deep emotional connection with the people there, with the land, with the culture, with the history and the heritage.

This one-pot meal, topped with walnuts and fresh mint and pomegranate seeds, is inspired by pilaf-style rice dishes made across the world.

The New Zealand singer Lorde releases her third album today. It’s what happens when a pop star stops trying to make hits, our culture reporter writes in this profile.

That’s it for today’s briefing. Have a restful weekend. — Natasha

P.S. The Times’s Afghan journalists and their families have made it to safety and will now begin their transition to new lives abroad.

The latest episode of “The Daily” is about the Afghan interpreters whom the U.S. left behind.