We’re covering the rising death toll from storm floods in the New York area and women protesting in Afghanistan. 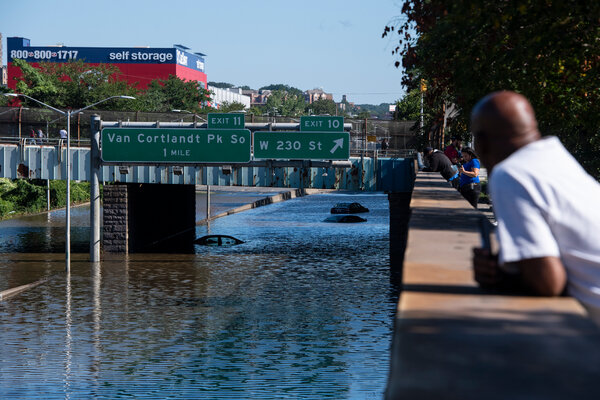 States of emergency remained in effect across New York, New Jersey and Pennsylvania on Thursday, as officials sought to get a handle on the damage from a devastating rainstorm that turned streets and subway platforms into rivers. Here are the latest updates.

At least 28 people died, including a 2-year-old boy. Eleven of the dead drowned in basement apartments. One man was found dead after being trapped in a car in rapidly rising floodwaters.

The torrential rain brought by the remnants of Hurricane Ida broke records set just days earlier, underscoring the dangers of global warming. President Biden said that the flash floods were a sign that “extreme storms and the climate crisis are here.” Here’s a collection of photos of the storm.

Details: Central Park recorded over 7 inches of rain, or around 18 centimeters, in 24 hours. To put that into context, the month is already one of the wettest Septembers in New York history.

Quotable: “We did not know that between 8:50 p.m. and 9:50 p.m. last night, that the heavens would literally open up and bring Niagara Falls-level water to the streets of New York,” Gov. Kathy Hochul of New York said.

As the highly contagious Delta variant continues to spread, several countries have begun or will start giving booster shots this month to people who have already been fully vaccinated against the coronavirus.

The Czech Republic announced that its booster campaign would begin on Sept. 20, and the country strongly recommended the additional shot for people over 60. France and Germany have similar programs.

The U.S. is planning to begin administering the third shots once federal regulators have approved them, which could happen in the coming weeks. Britain’s health secretary said on Wednesday that a third dose would be offered to people with severely compromised immune systems “as soon as possible.” Israel is now offering boosters to vaccinated people as young as 12.

Despite the flurry of booster programs in wealthier nations, the science of whether they are needed is not yet clear. Experts generally agree that a third shot is warranted for those with compromised immune systems.

On Thursday, the E.U. drug regulator said there was no urgent need to give booster shots to fully vaccinated people without underlying health issues.

A first batch of 930,000 doses of the Pfizer-BioNTech vaccine has arrived in Taiwan after months of delay in securing the distribution from a Chinese company.

North Korea has declined an offer of 2.97 million Covid vaccine doses, saying they should be sent to countries with worse outbreaks instead.

Dozens of women marched in the streets of Herat on Thursday to press demands for more rights and inclusion in the Taliban’s future government.

Herat, in western Afghanistan, is one of the most liberal cities, and thousands of young women there attended universities and worked outside their homes before the Taliban takeover. Organizers said they wanted to expand the protests across the country.

“If we stay in our houses, we can’t show our power,” said Maryam, a protest organizer. “But the Taliban can impose more restrictions on us to remove us from society and politics slowly.”

Context: Though the Taliban have promised to allow women to work and study, many are skeptical because the last time they ran Afghanistan, women were banned from education, most work and nearly all aspects of public life.

The latest: The Kabul airport was expected to reopen soon, possibly with help from Qatar and Turkey.

Some good news: A group of Afghans who worked for The New York Times, along with their families, have reached the U.S.

Kolkata’s 140-year-old tram system — the first in Asia and the last still operating in India — is neither fast nor punctual, but it does have the benefit of being emission-free in a city struggling with overcrowding.

China’s foreign minister, Wang Yi, has warned John Kerry, the U.S. envoy for climate, that antagonism from the U.S. on other fronts could hobble climate cooperation.

Sara Duterte-Carpio, mayor of Davao City and daughter of President Rodrigo Duterte of the Philippines, said she had received offers for running mates if she chooses to run for president next year.

Irish regulators fined Facebook’s WhatsApp nearly $270 million for not being transparent about how it used people’s data. Regulators in Ireland have been criticized for not enforcing Europe’s data-protection law.

President Biden criticized the Supreme Court’s refusal to block a Texas law that prohibits abortion after six weeks and said his administration would investigate how the federal government could protect abortion rights.

Ashleigh Barty won her match at the U.S. Open and advanced to the third round, and Novak Djokovic plays in a few hours.

Monica Lewinsky hopes to reframe her story as a producer on “Impeachment,” the latest installment of the “American Crime Story” television series, which revisits the events leading up to the impeachment of President Bill Clinton through the perspectives of the women involved.

Lives lived: Syed Ali Geelani, an influential leader of the separatist movement of Kashmir, died while under house arrest in Srinagar, Kashmir’s biggest city. He was 91.

Fridges of the rich and famous

In the kitchens of the ultrawealthy in the United States, fridges are not meant to be seen. “I don’t think I’ve had a client that’s wanted to reveal their fridge for a very long time,” said an interior designer whose firm has worked with Cher, Tommy Hilfiger and Kylie Jenner.

Designers cover the fridges with custom wood that blends in with a kitchen’s cabinetry. They resemble “the imaginary dragons of childhood fantasy in that they are both invisible and enormous,” Caity Weaver writes in The Times.

Cabinets, too, are becoming refrigerators. Often located in kitchen islands, small built-in drawers store wine, drinks and fresh produce. “They like to have lots of beverages,” said Shannon Wollack, the founder of an interior design firm whose clients include many people in the entertainment industry.

Wealthy people want to hide their appliances, designers said, because kitchens are rooms for casual congregation. As a result, they furnish them like living rooms, with art and expensive lighting.

This is a simple recipe: A holy-grail, one-pot roast chicken.

The superhero movie “Shang-Chi and the Legend of the Ten Rings” follows a millennial slacker as he reckons with his past — and his family of warriors.

“Intellectual 20-somethings discussing their vexed feelings for one another is a road made mostly of potholes,” our reviewer writes about Sally Rooney’s new novel. “Rooney avoids almost all of them.”

Here’s today’s Mini Crossword, and a clue: Bone in the leg (five letters).

The latest episode of “The Daily” is about the aftermath of Hurricane Ida in New Orleans.