We’re covering the latest escalation in the Strait of Hormuz, the prosecution of gay soldiers in South Korea and a deceivingly picturesque lake in Siberia. 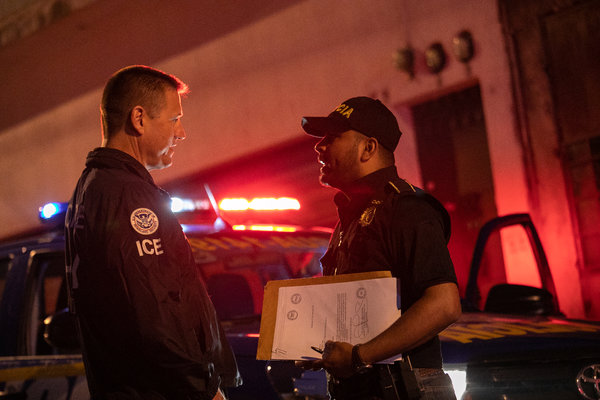 Details remain in flux, but the raids are expected to unfold over days in at least 10 major cities, targeting at least 2,000 immigrants who have been ordered deported but remain in the country. “Collateral” deportations of other migrants who happen to be on the scene may also occur.

Officials have said that agents are apprehensive about the possibility of arresting babies and young children. They also acknowledge that migrants may have moved or would be able to avoid arrest by simply not opening the door to ICE agents, who are not allowed to enter by force.

Background: The operation, backed by President Trump, was initially planned for last month but was postponed in part because of resistance among Homeland Security officials.

Tensions escalate between Iran and the West

A British warship forced back three Iranian boats on Thursday that had sought to block a British tanker from passing through the Strait of Hormuz, Britain’s Defense Ministry said.

Iran has denied any attempts to stop the tanker, according to Iranian news media.

Background: Iran, the U.S. and the E.U. are in a standoff that has been playing out since last year when President Trump abandoned the 2015 nuclear treaty with Iran and reimposed sanctions.

The E.U. has tried to salvage the nuclear pact, but Iran is seeking leverage against U.S. sanctions. The friction with Britain might push it to join the Trump administration in confronting Tehran.

Global impact: The Strait of Hormuz is a vital channel for 20 percent of the world’s supply of oil — and instability in the region could disrupt the flow to countries around the world.

Automation plays a large role at Amazon’s warehouses and the company has more than 200,000 robots worldwide.

But there are signs that robotics are already creating large-scale employment shifts: Amazon said it would spend $700 million to retrain a third of its workers in the U.S. — about 100,000 employees — by 2025.

Related: Pluribus, a poker-playing algorithm, can beat the world’s top human poker players, proving that machines, too, can master our mind games. Experts believe the techniques that drive Pluribus could be used in activities like Wall Street trading and even cybersecurity.

While the army says it does not discriminate against sexual minorities, an increasing number of gay or transgender soldiers have been outed and punished, according to a new Amnesty International report.

Details: South Korea is technically in a state of war with North Korea and all able-bodied men are required to serve in the army for about two years. Prosecutions under the law jumped to 28 in 2017 from two in 2009. In 2017, the army began an aggressive crackdown, confiscating soldiers’ phones without warrants and forcing members to out others.

Response: The military says it doesn’t bar gay and transgender people from serving and the government maintains that the law is needed to deter abuse in the army, which is almost entirely male.

Life in a city without water

Bathe with the water that drips out of the air-conditioner or skip showers all together. Line up every day to fill neon plastic pots from a public tap. Rinse the rice, then use the water to wash the fish. Hand wash everything.

These are some of the water-saving hacks that the nearly five million residents of Chennai have adopted as their water sources — groundwater, reservoirs and lakes — have virtually dried up.

The Philippines: The U.N.’s top human rights body voted to investigate thousands of alleged extrajudicial killings linked to President Duterte’s war on drugs, as well as arbitrary arrests and the persecution of journalists and political opponents in the country.

Taiwan: President Tsai Ing-wen kicked off her trip to the U.S. with a stopover in New York, her first as the leader of the self-governing island. The trip risks infuriating China, which claims Taiwan as its territory.

President Trump: The president welcomed to the White House conservative social media figures to discuss what they believe is a concerted effort on major platforms to muffle their voices.

France: Lawmakers voted to impose a 3 percent tax on revenues for technology companies, targeting Facebook, Google, Amazon and others that focus on advertising and e-commerce. The Trump administration is investigating the move as a possible unfair trade practice, raising the possibility of a trade war if President Emmanuel Macron signs the tax into law, as expected.

Britain: People working for members of Parliament faced an “unacceptable risk of bullying and harassment,” including sexual harassment, but often remained silent because complaining amounted to “career suicide,” according to a blistering new report that lifts the lid on the punishing hallways of the House of Commons.

The Vatican: The search for a teenage girl who disappeared from the streets of Rome 36 years ago recently led to two tombs in a cemetery inside the Vatican. But they were empty, missing even the bodies of the two princesses they were supposed to hold.

Snapshot: Above, Instagram posts that feature a lake outside Novosibirsk, Siberia. The lake might look like a slice of paradise, but it’s artificial — a waste site for a power plant — and gets its irresistible blue color from calcium salts and metal oxides.

Uluru: Climbers have been flocking to the rock, which is sacred to Australia’s Indigenous Anangu people, ahead of an Oct. 26 ban on scaling the surface. But the rush has added new strains to the site.

365 books: Matt Zurbo, an oyster farmer in rural Tasmania, is writing 365 children’s books in 365 days in a challenge he named after his daughter, Cielo.

What we’re reading: This article from The New Yorker’s archives. Jennifer Jett, a digital editor in Hong Kong, says: “The earthquakes in Southern California last week have renewed interest in this highly alarming 2015 article about ‘the really Big One’ — coming for the Pacific Northwest.”

Cook: Blackberry corn cobbler should be served warm with a splash of cream or a scoop of ice cream.

Listen: In Mahalia’s “Simmer,” insistent syncopations don’t just ratchet and tick in what have become trap clichés; they ping and twang, bonk and buzz.

Watch: “The Lion King,” the latest star-studded remake of the Disney classic that will hit theaters around the world next week, is … “O.K.,” according to our chief film critic. “There is a lot of professionalism but not much heart,” he writes.

Read: “Pan’s Labyrinth: The Labyrinth of the Faun,” by Guillermo del Toro and Cornelia Funke, is based on the 2006 film. It debuts on our young adult hardcover best-seller list.

Smarter Living: One thing you can do for the climate is talk about it. Find out how your family, friends and colleagues feel about the issue, and tell them what you’re doing to limit your carbon footprint. As Connie Roser-Renouf, a specialist in science communication, puts it, “It’s the people we talk to and care about that persuade us.”

And if you’re taking off work for a few days, we have examples of some perfect out-of-office messages.

These are just a handful of the 29 additions Unesco made this week to its World Heritage List of sites that have cultural, natural, scientific, historical or other significance. (The full criteria for selection is quite broad.)

The list began in 1978 with 12 sites, including the Galápagos Islands and Yellowstone National Park. It now includes 1,121.

Inclusion can spur preservation and protection. But it can also stimulate tourism, and some sites have struggled to manage the increase in visitors that comes with their newfound popularity.

Venice and its lagoon received the designation in the 1980s, enhancing its already extraordinary appeal. It’s now one of the most heavily toured cities in the world, with tens of millions of visitors annually, overwhelming a population of just 50,000.

That’s it for this briefing. Have a great weekend.

Thank you
To Mark Josephson and Eleanor Stanford for the break from the news. Stephen Hiltner, an editor on the Travel desk, wrote today’s Back Story. You can reach the team at [email protected]

P.S.
• We’re listening to “The Daily.” Our latest episode is on President Trump and the 2020 census.
• Here’s our Mini Crossword, and a clue: Two-word denial (5 letters). You can find all our puzzles here.
• Maggie Haberman, one of our White House correspondents, answered reader questions about covering President Trump.