Growing calls for a second impeachment.

We’re covering the push to impeach President Trump for a second time, new variants of the coronavirus and a road map to fix the web. 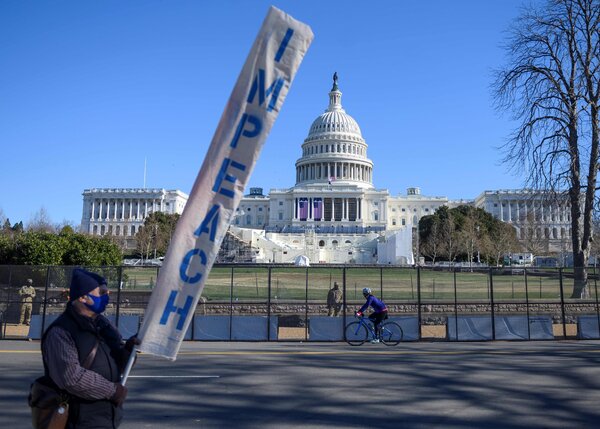 Growing calls for a second impeachment

Momentum to impeach President Trump yet again continues to mount — even though it would have almost no effect on how long he remains in office. His term expires 11 days from now, and the most rapid conceivable Senate trial would cover much of that time.

But the impeachment debate is still highly consequential. The Senate has the power both to remove Trump from office and to prevent him from holding any future office, potentially altering the future of American politics. Here’s what we know about the process.

The House may vote as soon as Tuesday on an article of impeachment charging Mr. Trump with inciting a violent mob that attacked the Capitol — but then delay sending it to the Senate for trial, to avoid hamstringing the first days of the Biden presidency.

(There’s more on the Capitol siege in our Back Story below.)

Opinion: Timothy Snyder, a historian of fascism and political atrocity, on Mr. Trump, the mob and what comes next.

Apple, Google and Amazon have removed Parler, a social media app popular with Trump supporters, from their platforms, saying the company failed to moderate posts encouraging violence and crime.

Senator Pat Toomey of Pennsylvania became the second Republican senator to call for Mr. Trump to resign. But Mr. Toomey questioned whether the Senate could convict him after he left office.

Dozens of people were arrested and charged after the riot at the Capitol last week.

Stripped of Twitter, Mr. Trump now faces a new challenge: how to thrust himself into the conversation on his own terms.

Around the world, new mutations of the coronavirus

Scientists continue to discover worrisome new variants of the virus, dousing some of the enthusiasm that arrived with the vaccines.

The new variant pummeling Britain has already been found in about 45 countries, from Singapore to Oman to Jamaica, but many countries are effectively flying blind, with little sense of how bad the problem may be.

The coronavirus has evolved as it made its way across the world, as any virus is expected to do. But experts have been startled by the pace at which significant new variants have emerged, adding urgency to the race between the world’s best defenses — vaccinations, lockdowns and social distancing — and an aggressive, ever-changing foe.

The infectious disease expert Dr. Anthony Fauci said he believed that theaters and other venues in America could reopen “some time in the fall of 2021,” depending on the success of the country’s vaccination rollout.

Not one person has been found to have contracted the coronavirus at any of Singapore’s three major universities, thanks to technology for enforcing social distancing, tough penalties and students willing to comply.

Pope Francis’s personal physician, who had been hospitalized for cancer treatment, died on Saturday as a result of the coronavirus.

Putting aside his misgivings, our correspondent in Russia opted to take the Sputnik V vaccine. Here’s why.

The art of the political lie

Donald Trump, Viktor Orban, Boris Johnson: Throughout the world, a readiness to deceive and be deceived on a sometimes colossal scale has in recent years become a driving force in global politics.

Lying in politics is nothing new, of course. But these reality-redefining falsehoods put democracy at risk and may place people in danger.

Even Britain, regarded as a bastion of democracy, has fallen prey to the scourge, voting in 2016 to leave the European Union after untrue claims by the pro-Brexit camp that an exit would mean that hundreds of millions of pounds paid every week to the E.U. could instead be spent on the country’s health service.

And in Hungary, the populist leader Mr. Orban has cast the Jewish financier and philanthropist George Soros as the shadowy mastermind of a sinister plot to undermine the country’s sovereignty, replace native Hungarians with immigrants and destroy traditional values.

Retelling history: A year after the world’s first coronavirus lockdown, in Wuhan, China, a new exhibition there tells a stirring — but selective — story of how the city’s sacrifices led to triumph over the coronavirus and, ultimately, rebirth.

The creator of the web wants to fix it.

Tim Berners-Lee, above, who helped create the World Wide Web three decades ago, believes the online world has gone astray: Too much power and too much personal data reside with tech giants like Google and Facebook, which have in turn become surveillance platforms and gatekeepers of innovation, he says.

But we still have the chance to remake our digital world. And Mr. Berners-Lee believes he knows how.

Indonesia crash: Divers have recovered wreckage and human remains from Sriwijaya Air Flight 182, which crashed into the ocean off Indonesia on Saturday with 62 people on board. The cause of the crash is not yet known.

Brexit: As Britain adjusts to its new life outside of the European Union, businesses are contending with delays, service cancellations and piles of paperwork.

Kyrgyzstan election: A populist politician and convicted kidnapper won a landslide victory on Sunday in a snap presidential election triggered by a popular uprising against the previous government.

Lives lived: The Times reporter Neil Sheehan, who obtained the Pentagon Papers and helped reveal the secret history of U.S. decision-making on Vietnam, died on Thursday at 84. The story about how he pulled off the blockbuster scoop can now be told.

‘I Hate Men’: The debut from the French writer Pauline Harmange, one of a handful of titles from France that suggest a more frank approach to sexism and gender violence, has been met with success and backlash alike.

Have sperm, will travel: Some sperm banks are running low on their supplies during the pandemic. Enter the sperm kings of America.

What we’re watching: This surprisingly personal video by Arnold Schwarzenegger, about his experiences as a child in postwar Austria, in light of the Capitol riot. “We need to heal, together, from the drama of what has just happened,” he said. “We need to heal, not as Republicans or as Democrats, but as Americans.”

Cook: This spicy white bean soup is a poem in a pot, filled with winter greens and rounded out with only a little ground turkey. It’s piquant, cozy and hearty — but surprisingly quick to make.

Watch: Did “Wonder Woman 1984” disappoint? Here are six great superhero movies available to stream that should more than make up for it.

Do: Meet your goals for the new year by asking yourself: How can I make this easier?

Whether you’re here for recipes or recreation, At Home has our full collection of ideas on what to read, cook, watch, and do while staying safe at home.

Many of the reporters who covered the storming of the seat of Congress last week did their jobs a few feet from drawn weapons. Others were faced with Trump supporters angry with the news media. We interviewed 11 journalists from a variety of outlets who covered the events. Here are excerpts from what they said.

Donie O’Sullivan, 29, CNN: We got to the barrier at the base of the Capitol as they broke through. It was a dramatic moment, but also surprisingly undramatic in that, you know, there were obviously not sufficient numbers of police or barricades.

Kadia Goba, Axios: Capitol Police came on the speaker to say there had been a breach. You go in this marble building, it seems sacred to the people that work there. You just don’t think of intruders gaining access to that portion of the building.

Marcus DiPaola, freelance: This guy grabs me by the shoulder and he’s like, “Who do you work for?” I’m like, “I’m a freelance photographer.” He’s like, “Have you ever worked for CNN?” And then he pulled me out of the way, and he charges in.

Zoeann Murphy, Washington Post: At around 10, I went back to my hotel, walking through these mobs of Trump supporters drunk in the lobby. I get back to my room, and that’s when I started to process the enormity of what had happened.

Robert Moore, Britain’s ITV: I went to sleep around 3 or 4 a.m. and was up a couple of hours later. What has surprised me is the level of interest in Europe, and in Britain, in particular, with the events here. This is seen as a seminal story, one that shatters the myth about the stability of American democracy.

That’s it for this briefing. See you on Tuesday.

P.S.
• We’re listening to “The Daily.” Our latest episode is about the online planning and on-the-ground failures that contributed to Trump supporters’ attack on the U.S. Capitol.
• Here’s our Mini Crossword, and a clue: Where you might read “Idk, tbh” (four letters). You can find all our puzzles here.
• Matt Mason, the state poet of Nebraska, wrote “The Start” in response to last week’s violent melee at the Capitol.
• Matt Thompson, the editor in chief at Reveal from the Center for Investigative Reporting, is joining The Times as editor of Headway, our new journalism initiative to investigate a range of economic, social, health, infrastructural and environmental challenges.